Facebook. Facebook. When Do Human Beings Begin? To begin with, scientifically something very radical occurs between the processes of gametogenesis and fertilizationthe change from a simple part of one human being (i.e., a sperm) and a simple part of another human being (i.e., an oocyteusually referred to as an "ovum" or "egg"), which simply possess "human life", to a new, genetically unique, newly existing, individual, whole living human being (a single-cell embryonic human zygote). 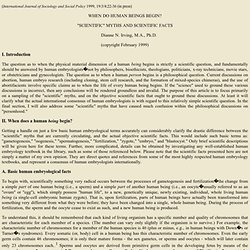 That is, upon fertilization, parts of human beings have actually been transformed into something very different from what they were before; they have been changed into a single, whole human being. During the process of fertilization, the sperm and the oocyte cease to exist as such, and a new human being is produced. To understand this, it should be remembered that each kind of living organism has a specific number and quality of chromosomes that are characteristic for each member of a species. 1) Gametogenesis 2) Fertilization "... 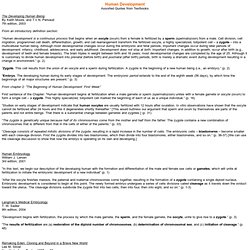 Persaud 7th edition, 2003 From an introductory definition section: “Human development is a continuous process that begins when an oocyte (ovum) from a female is fertilized by a sperm (spermatozoon) from a male. Cell division, cell migration, programmed cell death, differentiation, growth, and cell rearrangement transform the fertilized oocyte, a highly specialized, totipotent cell – a zygote – into a multicellular human being. “Zygote. “Embryo. From chapter 2: “The Beginning of Human Development: First Week” First sentence of the Chapter: “Human development begins at fertilization when a male gamete or sperm (spermatozoon) unites with a female gamete or oocyte (ovum) to form a single cell – a zygote. “Studies on early stages of development indicate that human oocytes are usually fertilized with 12 hours after ovulation. Human Embryology William J. Langman’s Medical Embryology T. Life Begins at Fertilization with the Embryo's Conception.

Secular Pro-Life Perspectives: Do human beings begin at fertilization? Hydatidiform moles occur when an egg without a nucleus gets fertilized; this fertilized egg does not have the genetic code of a human organism and will never develop into an infant. 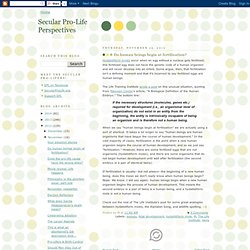 Some argue, then, that fertilization isn't a defining moment and that it's incorrect to say fertilized eggs are human beings. The Life Training Institute wrote a post on this unusual situation, quoting from Maureen Condic's article, "A Biological Definition of the Human Embryo. " The bottom line: If the necessary structures (molecules, genes etc.) required for development (i.e., an organismal level of organization) do not exist in an entity from the beginning, the entity is intrinsically incapable of being an organism and is therefore not a human being. When we say "human beings begin at fertilization" we are actually using a sort of shortcut. If fertilization is usually--but not always--the beginning of a new human being, does this mean we don't really know when human beings begin? Secular Pro-Life Perspectives: What is the Unborn? A Case for Biological Humanity from Fertilization.

Aside from the sourced quotations and arguments in this article, it has been heavily influenced by Justice for All. 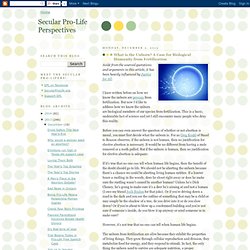 I have written before on h0w we know the unborn are persons from fertilization. But now I'd like to address how we know the unborn are biological members of our species from fertilization. This is a basic, undeniable fact of science and yet I still encounter many people who deny this reality. Before you can even answer the question of whether or not abortion is moral, you must first decide what the unborn is. For as Greg Koukl of Stand to Reason observes, if the unborn is not human, then no justification for elective abortion is necessary. If it’s true that no one can tell when human life begins, then the benefit of the doubt should go to life.

However, it’s not true that no one can tell when human life begins. The unborn from fertilization are alive because they exhibit the properties of living things. Abortion.