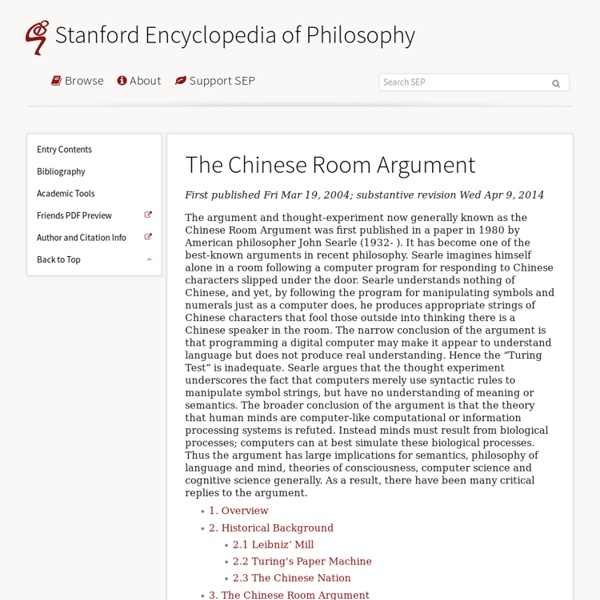 1. Overview Work in Artificial Intelligence (AI) has produced computer programs that can beat the world chess champion and defeat the best human players on the television quiz show Jeopardy. AI has also produced programs with which one can converse in natural language, including Apple's Siri. Our experience shows that playing chess or Jeopardy, and carrying on a conversation, are activities that require understanding and intelligence. Does computer prowess at challenging games and conversation then show that computers can understand and be intelligent? Searle argues that a good way to test a theory of mind, say a theory that holds that understanding can be created by doing such and such, is to imagine what it would be like to do what the theory says would create understanding. Imagine a native English speaker who knows no Chinese locked in a room full of boxes of Chinese symbols (a data base) together with a book of instructions for manipulating the symbols (the program). 2. 17. 3. 4.

Elon Musk Says There’s a ‘One in Billions’ Chance Reality Is Not a Simulation Wednesday night, SpaceX and Tesla CEO Elon Musk did that thing he does every so often, which is take wild questions from an audience and answer them as if he’s been thinking about them for years, usually because he has. Pick a random quote out of a bag and you can turn Musk’s statements at the Recode Code Conference into a piece of news: He wants to put humans on Mars by 2025, said SpaceX is still on track to test the most powerful rocket in the world this year, said Mars isn’t a “bad choice” for a place to die, wants to relaunch a used Falcon 9 rocket in a few months, said we’re already cyborgs, discussed why a direct democracy would be the best political system for a Mars colony and then went into specifics of how that democracy would work, etc. Depending on the question, the resulting discussions are ones philosophy or engineering students have probably had while they’re flying high on an illicit substance. "There’s a one in billions chance we’re in base reality"

Enable Tab Browsing In Windows Explorer with Clover If you have to work with many opened folders, your desktop can get a little messy. Finding the folder you want from one open window to the next will be a nightmare. It’s no surprise that some of us prefer the tab setup like how it is on the Chrome browser. It’s easier to navigate through, locating, opening and closing tabs as required. Actually, you can have that feature with a little help from Clover.

Elon Musk: There's only one AI company that worries me Elon Musk's concerns about the dangers of artificial intelligence have been well publicized, but the SpaceX and Tesla founder says that of all the companies currently working on self-aware computers, there's only one whose efforts actually worry him. Speaking on stage at Recode's Code Conference, Musk was asked by The Verge's own Walt Mossberg whether he was worried specifically about the efforts of big tech players like Google and Facebook currently pivoting to AI research. "I won't name names," Musk said, "but there's only one." Mossberg pressed the question, wondering whether the company that kept the Tesla boss up at night was not one currently preoccupied with developing its own car.

Education Industry Campaign Finance & Lobbying Trends A 10-Year Trend in Spending by the Education Industry Since 1989, spending by the education industry to fund election campaigns and lobbying activities has continuously increased. Also of note is the large disproportional level of spendings on campaigning versus lobbying efforts. The chart below tracks spending reported through 2011. Campaign Contribution Breakdown: 1989 - Current Election Cycle Gallery Videos Reconstruction and simulation of neocortical microcircuitry The Blue Brain Project Movie Images Intel® and AMD® Processor Guide | Research Center | Toshiba Laptops, Netbooks & Accessories Intel® mobile processors Whether you’re a basic user sending email or an extreme gamer immersed in intense online action, great mobile computing starts with an Intel processor inside. From the reliability of Atom™ to the high performance, great battery life and advanced connectivity of Intel® Core™ i7 processor technology, Intel’s processors give you the freedom to do everything while you go almost anywhere. 3rd Generation Intel® Core™ i7 Visibly smart performance starts here Whether it’s HD or 3D, multitasking or multimedia, this processor can handle it all. Its top-of-the-line adaptable speed and responsiveness make the 3rd generation Intel® Core™ i7 processor the ideal choice for visibly smart performance at its best.

Digital version of piece of rat brain fires like the real thing The brain is going digital. A tiny piece of a rat’s brain has been reconstructed in minute detail in a computer. The digital piece of brain, which includes 31,000 neurons and their 37 million synapses, fires like the real thing, and is already revealing fresh clues as to how the brain works. The simulation is the first significant achievement of the Blue Brain project, which was launched 10 years ago by Henry Markram at the Swiss Federal Institute of Technology in Lausanne, Switzerland. Today’s breakthrough represents the first step to a larger goal – creating a digital model of the entire human brain to probe consciousness itself.