The winners and losers of the Sydney property boom. Could not load plugins: File not found Sydney's million-dollar median. 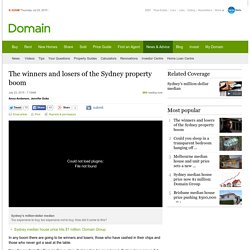 Aussie politicians’ $300m property portfolio. By Lindsay David , Paul Egan & Philip Soos, cross-posted from the Australia: Boom to Bust Blog “With more and more Australians finding it difficult to break into home ownership, adopting the Canadian scheme would make a difference to thousands of Australians each year,” Senator Xenaphon said: “As HomeStart Finance said this week, there’s something strange about being able to access your super fund if you are about to default on your housing loan, but you can’t access it to put a deposit on a home in the first place,” he said. 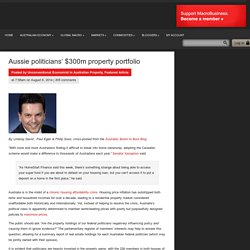 Australia is in the midst of a chronic housing affordability crisis. The three forces pushing Australia towards recession. Rampant speculation in the Australian and Chinese property sectors leaves our banking and mining sectors vulnerable to collapse within the next three years. 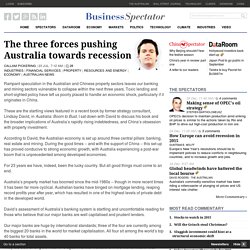 Toxic lending and short-sighted policy have left us poorly placed to handle an economic shock, particularly if it originates in China. These are the startling views featured in a recent book by former strategy consultant, Lindsay David, in Australia: Boom to Bust. I sat down with David to discuss his book and the broader implications of Australia’s rapidly rising indebtedness, and China’s obsession with property investment. According to David, the Australian economy is set up around three central pillars: banking, real estate and mining. During the good times -- and with the support of China -- this set-up has proved conducive to strong economic growth, with Australia experiencing a post-war boom that is unprecedented among developed economies. Irrational Exuberance Down Under. Lindsay David's new book on Australia deserves a medical disclaimer: Reading this will greatly raise your blood pressure. 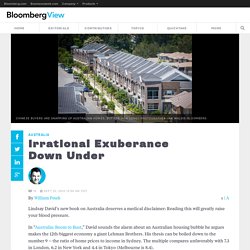 In “Australia: Boom to Bust,” David sounds the alarm about an Australian housing bubble he argues makes the 12th-biggest economy a giant Lehman Brothers. His thesis can be boiled down to the number 9 -- the ratio of home prices to income in Sydney. The multiple compares unfavorably with 7.3 in London, 6.2 in New York and 4.4 in Tokyo (Melbourne is 8.4). Housing is one of the three pillars of the Australian economy, along with financial institutions and natural resources. Politicians and investors alike, David writes, don't get “how deeply intertwined and connected” these sectors are and “how they can easily take each other down in a domino effect.”

​‘Boom’-erang at point of no return? Australian economic boom ending — RT Op-Edge. Bryan MacDonald is a Russia-based Irish journalist and media commentator who focuses on Russia and its hinterlands and international geo-politics. 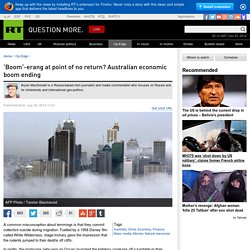 Published time: July 02, 2014 13:01 AFP Photo / Torsten Blackwood A common misconception about lemmings is that they commit collective suicide during migration. Fuelled by a 1958 Disney film called White Wilderness, stage-trickery gave the impression that the rodents jumped to their deaths off cliffs. RBA urges increased housing supply to deflate price bubble. The RBA has signaled its intent to target the housing investors it feels are putting Australian economic growth at risk.

James Glynn from the Wall Street Journal explains how. More videos available at the The Australian video hub. RBA: Is Housing Overvalued? - rdp2014-06.pdf. The Murray Inquiry Just Popped The Property Investment Bubble. David Murray’s Financial System Inquiry sounded the death knell of the massive surge in Australian property prices driven by investment borrowing we have seen over the past couple of years. 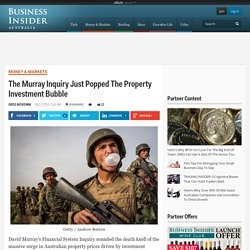 Murray’s recommendation 8 reads: Remove the exception to the general prohibition on direct borrowing for limited recourse borrowing arrangements by superannuation funds. Who crashed the economy? Financial regulators united in attack on risky loans. APRA's Wayne Byres says it will be dialling up the intensity of its supervision. 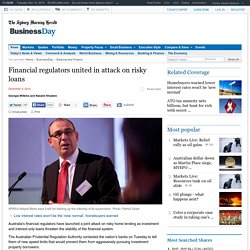 Photo: Patrick Scala Low interest rates won't be the 'new normal', homebuyers warned. Housing bubble talk ‘alarmist’: RBA. RBA assistant governor Malcolm Edey said on Wednesday at a financial services conference in Sydney that the property market was growing at a higher than average rate, but dismissed any suggestion it was getting out of control. 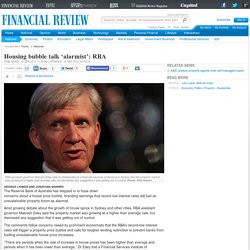 Photo: Rob Homer George Liondis and Jonathan Shapiro The Reserve Bank of Australia has stepped in to hose down concerns about a house price bubble, branding warnings that record low interest rates will fuel an unsustainable property boom as alarmist. Amid growing debate about the growth of house sprice in Sydney and other cities, RBA assistant governor Malcolm Edey said the property market was growing at a higher than average rate, but dismissed any suggestion that it was getting out of control.

The comments follow concerns raised by prominent economists that the RBA’s record-low interest rates will trigger a property price bubble and calls for tougher lending restriction to prevent banks from fuelling unsustainable house price increases. APRA to work with banks. Regulatory response to housing bubble all in the past. Property investors should heed APRA's warning. Investor activity has surged to new heights and the Australian Prudential Regulation Authority is watching closely. 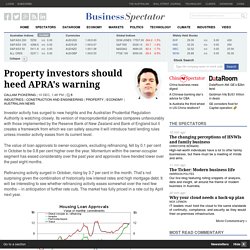 Its version of macroprudential policies compares unfavourably with those implemented by the Reserve Bank of New Zealand and Bank of England but it creates a framework from which we can safely assume it will introduce hard lending rules unless investor activity eases from its current level. The value of loan approvals to owner-occupiers, excluding refinancing, fell by 0.1 per cent in October to be 0.8 per cent higher over the year. Weekend Economist: Safe as houses. The Reserve Bank governor spoke during the week on the economy including some important hints around monetary policy. For those folks expecting an imminent rate hike the following passage would have been rather discouraging: "There are sufficient spare labour resources such that we could probably enjoy a couple of years of non-mining sector growth somewhat above its trend rate before we needed to worry too much about serious inflation pressure".

On the other hand, for those expecting a rate cut, consider: "A high level of construction, maintained for a longer period of time, is vastly preferable to a very sharp boom and bust cycle. That alternative outcome might give us a higher peak in the near term, but then a slump in the housing sector at a time when the fall in mining investment is still occurring". The clear implication behind this comment is that lower rates might bring forward more housing activity only to see the downturn exacerbated when rates do rise. We need house price rises to grow economy. Any abrupt end to the current housing upturn would quickly leave the economy bereft of growth drivers. Illustration: Michael McGurk David Bassanese The Australian economy has had an outstanding run over the past two decades and has admirably dodged a number of global upheavals that might have felled lesser economies. Any economist south of 40-years-old has no working knowledge of what it feels like to fall into a wrenching recession.

This complacency is manifesting itself in two critical areas. For starters, the Abbott government was so keen to destroy the economic reputation of the previous Labor government that it recklessly damaged still-fragile business and consumer confidence by talking up a “budget crisis” that barely existed. Retirees hammered as banks cut term savings rates. Pensioners and self-funded retirees are hurt by declines in interest rates on term deposit rates by the big four banks in recent months even as the RBA hasn’t budged on rates since August 2013.

NSW councils are grappling with how to manage the growing market for private short term holiday letting, which is expanding through social websites such as Airbnb. The City of Sydney has warned an individual could face a $750 fine for renting out their property without council approval. ''The City's Local Environment Plan does not permit mixing permanent residential use with tourist and visitor accommodation models in the same building,'' a council spokeswoman said. Investors duck as RBA tries to douse housing. Bank lending Christopher Joye and James Eyers. The two certainties in housing: debt and taxes - The Drum.

Posted As far as houses go, Australia's commitment to free markets and negative gearing could keep supply down, demand up and houses unaffordable for quite a while, writes Alan Kohler. The real story of US coal: inside the world's biggest coalmine. SmartCompany - Job hunters sue LinkedIn over lost job opportunities. Professional networking platform LinkedIn has been hit with a class action from a number of disgruntled job seekers in the US, who claim one of the site’s premium services has cost them jobs. Cashed-up private equity ready to shop. Global growth fears reignite yield hunt. Low rates no growth panacea, Gerard Minack says. More people are bequeathing before death. Global markets are parched for liquidity. Rein in SMSFs’ property investment: Keating. Paul Keating . . . Can you still bank on the banks? While the banks’ halcyon days have passed, investors still find their shares irresistible – particularly since the steep share price drop has pushed yields to about 6 per cent.

Macquarie eyes 16pc drop in bank valuations. Cultural power: the list. Anne Hyland One of the biggest news stories of 2014, the killing of Luke Batty, nearly disappeared from public view.