Money for nothing - Counting the Cost. From Lehman to Libor, scandal and even criminal activity have stalked the banking sector. 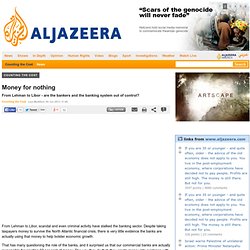 Despite taking taxpayers money to survive the North Atlantic financial crisis, there is very little evidence the banks are actually using that money to help bolster economic growth. That has many questioning the role of the banks, and it surprised us that our commercial banks are actually responsible for creating 97 per cent of money. The way they do that, they create money into existence with a few taps on a keyboard. So, who is actually in charge of all the money? How Sharing Platforms Empower the Agricultural Industry. Despite technology’s pervasive tendencies, farming and disruption were, until recently, completely unrelated concepts. 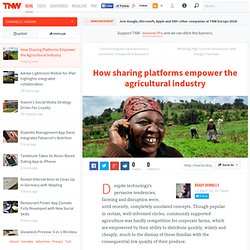 Though popular in certain, well-informed circles, community supported agriculture was hardly competition for corporate farms, which are empowered by their ability to distribute quickly, widely and cheaply, much to the dismay of those familiar with the consequential low quality of their produce. Fortunately, technological advancement also means greater technological access, placing the necessary tools for communication in the hands of even the most dated markets. Recently, this came to include the agricultural industry, to drastic gains in both developed nations like the US, where Farmigo is connecting local farms to consumers, and developing nations like Kenya, where iCow and M-Farm are connecting local farmers with one another to compete with mass producers.

Technological change: The last Kodak moment? Problems of Reading Comprehension. Oy. David Adolfatto seems so determined to take a swipe at me that he can’t actually read straight. I accused Lucas of not understanding Ricardian equivalence. Here’s Lucas’s argument: But, if we do build the bridge by taking tax money away from somebody else, and using that to pay the bridge builder — the guys who work on the bridge — then it’s just a wash.

It has no first-starter effect. That’s saying that the spending response to expected future taxes leads to a fall in consumption that exactly offsets the expansionary fiscal policy. Then Andolfatto says that Lucas was arguing that it matters how government spending is financed. If the government builds a bridge, and then the Fed prints up some money to pay the bridge builders, that’s just a monetary policy. So he was saying that government spending can’t raise aggregate demand. Let me add that the notion that expected future taxes make government spending ineffective even as a way of increasing short-run demand is very widespread. More On The Burden Of Debt. I suspect that I may have been too cryptic in my post on the real burden of debt. So let me give you a thought experiment that may help clarify matters.

Suppose that for some reason the nation temporarily ends up being ruled by a guy who is driven mad by power, and decrees that everyone will have to wear their underwear on the outside (sorry, Woody Allen reference) everyone will receive a large allotment of newly printed government bonds, adding up to 500 percent of GDP.

The government is now deeply in debt — but the nation has not directly gotten any poorer: the public, in its role as taxpayers, now owes 500 percent of GDP, but the public, in its role as investors, now owns new assets equal to 500 percent of GDP. It’s a wash. So where’s the problem? And you don’t have to be a right-winger to acknowledge that yes, very high marginal tax rates act as a disincentive to productive activity. Warrant Marrant. Want jobs? Encourage immigration. 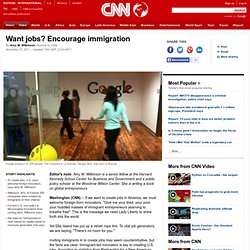 The company's co-founder, Sergey Brin, was born in Russia. To create jobs, U.S. must welcome foreign innovators, says Amy M. WilkinsonWilkinson: 40% of Fortune 500 companies were created by immigrants or their childrenCurrent U.S. visa policy is discouraging innovators from coming here, Wilkinson says We need an "entrepreneurs' visa" based on capital raised or revenues generated, she says Editor's note: Amy M. Wilkinson is a senior fellow at the Harvard Kennedy School Center for Business and Government and a public policy scholar at the Woodrow Wilson Center.

Washington (CNN) -- If we want to create jobs in America, we must welcome foreign-born innovators. Yet Ellis Island has put up a velvet rope line. Inviting immigrants in to create jobs may seem counterintuitive, but the facts are clear. Deepening Eurozone crisis? - Inside Story. The number of countries in economic trouble has grown in the last two years, leading many to believe that the Eurozone crisis is worsening. 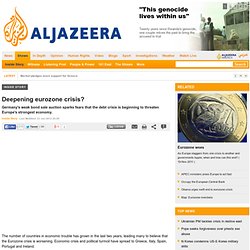 Economic crisis and political turmoil have spread to Greece, Italy, Spain, Portugal and Ireland. Meanwhile, one country - Germany - above all other members of the 17-nation eurozone has been seen as totally safe, solid and stable. But the economic powerhouse of Europe has had a rude awakening of its own as a recent sale of government bonds flopped. Investors bought less than half of the $8bn in German bonds on offer - usually considered a safe bet. The failure sent stocks diving across the globe and the euro slid to a seven-week low against the dollar.