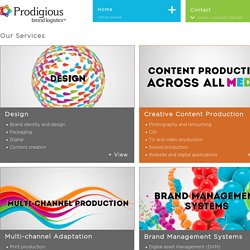 Publicis Groupe 2014 digital greeting. After hacking the YouTube functionality last year with Digital Wishes for 2013, Publicis Groupe CEO Maurice Lévy is back again with a new year corporate speech that features 2 Chinese dragons, a confetti storm, cheerleaders and much more. 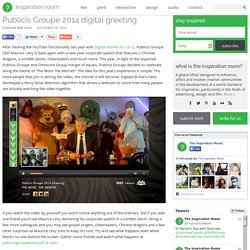 This year, in light of the expected Publicis Groupe and Omnicom Group merger of equals, Publicis Groupe decided to celebrate along the theme of “The More The Merrier!” The idea for this year’s experience is simple: The more people that join in during the video, the merrier it will become. DigitasLBi Paris have developed a fancy facial detection algorithm that allows a webcam to count how many people are actually watching the video together.

If you watch the video by yourself you won’t notice anything out of the ordinary, but if you add one friend you’ll see Maurice Lévy delivering his corporate speech in a confetti storm. Download the first ever Maurice Lévy original SoundCloud track, “The More The Merrier” at Soundcloud. Interactive case studies. Casestudy. Holler. State of Play - Lovingly crafted games & animations. Official website. A ruthless new hero for a brutal world Play as Arno, an entirely new breed of assassin, and take down your prey with a range of new weapons such as the phantom blade, a hidden blade with crossbow capabilities. 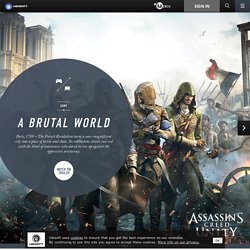 Brand-new parkour, combat and stealth gameplay Enjoy an unprecedented degree of freedom and control over your assassin. Full Motion Control with New Parkour Mechanics for Free Running Up, Across and Down City Walls and Buildings. A reinvented fighting system provides a richer combat experience based on skill, timing and flow.

One of Europe’s leading games developers, Rebellion is the studio behind hit games such as Sniper Elite 3, Sniper Elite V2, the Nazi Zombie Army series, Aliens vs. 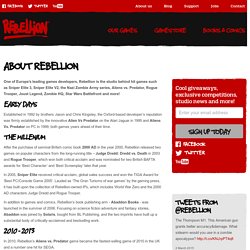 Predator, Rogue Trooper, Joust Legend, Zombie HQ, Star Wars Battlefront and more! Early Days Established in 1992 by brothers Jason and Chris Kingsley, the Oxford-based developer’s reputation was firmly established by the innovative Alien Vs Predator on the Atari Jaguar in 1995 and Aliens Vs. Predator on PC in 1999, both games years ahead of their time. The Millenium After the purchase of seminal British comic book 2000 AD in the year 2000, Rebellion released two games on popular characters from the long-running title – Judge Dredd: Dredd vs. In 2005, Sniper Elite received critical acclaim, global sales success and won the TIGA Award for ‘Best PC/Console Game 2005’. In addition to games and comics, Rebellion’s book publishing arm - Abaddon Books - was launched in the summer of 2006. Sign Up. Proteus. DAVID OREILLY. Inkle - 80 Days. Kin. Industry Workshops. Industry Workshops is a collective of London based creatives with a shared interest in establishing a broad based and vibrant visual arts community through continued education. 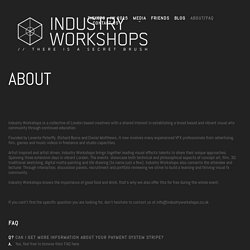 Can i get more information about your payment system STRIPE? Q: Will there be food? Opus Artz Concept Art & Production Studio  Opus Artz is a 2D production design agency based in London, UK with a global client base in film, games and publishing offering a complete 2D Visual development pipline.Our diverse talent pool of conceptual artists, production artists and illustrators are specialists in their own respective right, augmented with a talented industrial design and previsualization team. 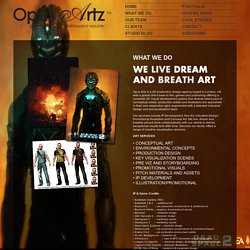