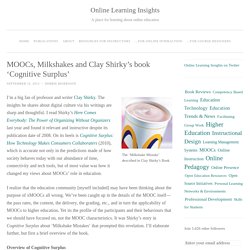 The insights he shares about digital culture via his writings are sharp and thoughtful. I read Shirky’s Here Comes Everybody: The Power of Organizing Without Organizers last year and found it relevant and instructive despite its publication date of 2008. On its heels is Cognitive Surplus: How Technology Makes Consumers Collaboraters (2010), which is accurate not only in the predictions made of how society behaves today with our abundance of time, connectivity and tech tools, but of most value was how it changed my views about MOOCs’ role in education. I realize that the education community [myself included] may have been thinking about the purpose of xMOOCs all wrong. Essay critiques the ideas of Clay Shirky and others advocating higher ed disruption.

Clay Shirky is a big thinker, and I read him because he’s consistently worth reading. 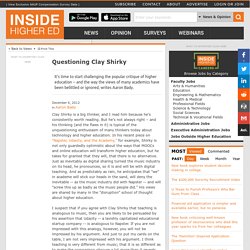 But he’s not always right – and his thinking (and the flaws in it) is typical of the unquestioning enthusiasm of many thinkers today about technology and higher education. In his recent piece on "Napster, Udacity, and the Academy," for example, Shirky is not only guardedly optimistic about the ways that MOOCs and online education will transform higher education, but he takes for granted that they will, that there is no alternative. Just as inevitably as digital sharing turned the music industry on its head, he pronounces, so it is and will be with digital teaching. And as predictably as rain, he anticipates that "we" in academe will stick our heads in the sand, will deny the inevitable -- as the music industry did with Napster -- and will "screw this up as badly as the music people did. " His views are shared by many in the "disruption" school of thought about higher education. Clay Shirky: How the Internet will (one day) transform government. 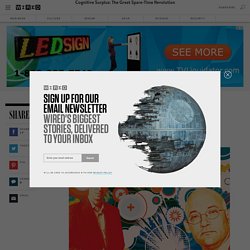 Both grew up in Midwest university towns in the 1970s, where they spent their formative years watching television after school and at night. Both later went to Yale (a BA in painting for Shirky, a law degree for Pink). And both eventually abandoned their chosen fields to write about technology, business, and society. Now their paths are intersecting. In December, Pink, a Wired contributing editor, came out with Drive: The Surprising Truth About What Motivates Us. Cracking the Code: U.S. House of Representatives Allows Use Of Open Source Software. As the executive branch of the United States government quietly works on creating an official open source policy, the legislative branch is also moving into the 21st century: Open source software is now officially permitted in the U.S. 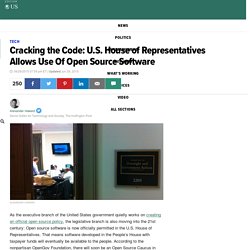 House of Representatives. That means software developed in the People’s House with taxpayer funds will eventually be available to the people. According to the nonpartisan OpenGov Foundation, there will soon be an Open Source Caucus in Congress. For those unfamiliar with the concept, “open source“ means the code behind the software can be viewed, accessed or modified by anyone. Four years ago, House.gov moved to Drupal, an open source content management system, but this is a much more significant shift. Clay Shirky Sees Media and Education on the Brink. 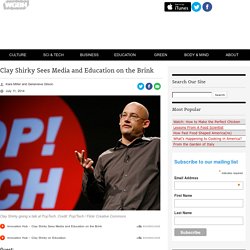 Credit: Pop! Tech / Flickr Creative Commons. Why I Just Asked My Students To Put Their Laptops Away… Connecting with Clay Shirky. When Clay Shirky speaks—at TED conferences, on Twitter, at NYU, where he focuses on the nexus of Internet and society—people listen. 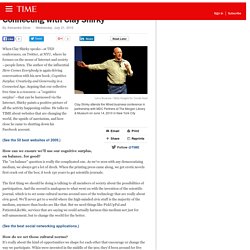 The author of the influential Here Comes Everybody is again driving conversation with his new book, Cognitive Surplus: Creativity and Generosity in a Connected Age. Arguing that our collective free time is a resource—a "cognitive surplus"—that can be harnessed via the Internet, Shirky paints a positive picture of all the activity happening online. He talks to TIME about websites that are changing the world, the upside of narcissism, and how close he came to shutting down his Facebook account. How can we ensure we'll use our cognitive surplus, on balance, for good? Clay Shirky. Clay Shirky (born 1964[2]) is an American writer, consultant and teacher on the social and economic effects of Internet technologies. 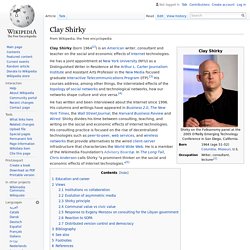 He has a joint appointment at New York University (NYU) as a Distinguished Writer in Residence at the Arthur L. Carter Journalism Institute and Assistant Arts Professor in the New Media focused graduate Interactive Telecommunications Program (ITP).[3] His courses address, among other things, the interrelated effects of the topology of social networks and technological networks, how our networks shape culture and vice versa.[4] Education and career[edit]