We need to recover degraded lands all over Earth. A number of initiatives are demonstrating it is possible to recover deserts with trees. This is a collection that illustrates how these solutions are becoming viable and attractive. 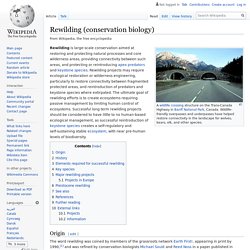 Wildlife-friendly overpasses and underpasses have helped restore connectivity in the landscape for wolves, bears, elk, and other species. Rewilding is large-scale conservation aimed at restoring and protecting natural processes and core wilderness areas, providing connectivity between such areas, and protecting or reintroducing apex predators and keystone species. Rewilding projects may require ecological restoration or wilderness engineering, particularly to restore connectivity between fragmented protected areas, and reintroduction of predators and keystone species where extirpated. The ultimate goal of rewilding efforts is to create ecosystems requiring passive management by limiting human control of ecosystems. Historic range of the European bison. Maximum Holocene range Range during the high middle ages Relict 20th century populations. Mushrooms as Rainmakers: How Spores Act as Nuclei for Raindrops. Abstract Millions of tons of fungal spores are dispersed in the atmosphere every year. 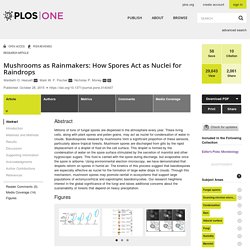 These living cells, along with plant spores and pollen grains, may act as nuclei for condensation of water in clouds. Basidiospores released by mushrooms form a significant proportion of these aerosols, particularly above tropical forests. Root intelligence: Plants can think, feel and learn. An article from this weeks New Scientist; With an underground "brain network" and the ability to react and remember, plants have their own kind of intelligence – and may even cry out in pain STEVE SILLETT has been hanging out with giants all his working life. 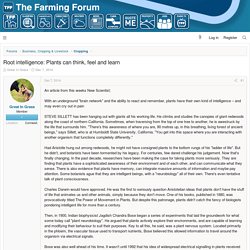 He climbs and studies the canopies of giant redwoods along the coast of northern California. Greening the Desert With Wastewater - Reasons to be Cheerful. Trees are a rarity in Egypt. 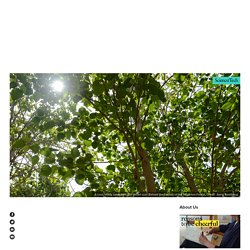 Ninety-six percent of the country is desert, and the parts that are not are either farmed intensively or populated densely, usually along the banks of the Nile. So when the row of towering trees appears on the horizon against the pale yellow sand and electric blue sky, I catch my breath. A Fata Morgana? Far from it. Climate change: Trees 'most effective solution' for warming. Image copyright Sutthipong4222 Researchers say an area the size of the US is available for planting trees around the world, and this could have a dramatic impact on climate change.

The study shows that the space available for trees is far greater than previously thought, and would reduce CO2 in the atmosphere by 25%. Making the most of the ‘UN Decade on Ecosystems Restoration’: bioregional regenerative development… On a crisp and frosty April morning in the North of Scotland in 2002, at the Findhorn Foundation ecovillage, some 250 activists and landscape restoration practitioners from all over the world declared the 21st Century as the ‘Century for Earth Restoration’. 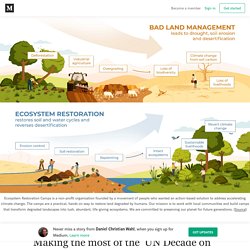 The conference was called by Alan Watson Featherstone who set up Trees for Life, a project that has since planted close to two million native trees to restore Scotland’s great ‘Caledonian Forest’. John Manocheri was the official UNEP delegate at the conference, and now — 17 years later — UN Environment has finally taken leadership on this issue and announced the ‘UN Decade on Ecosystems Restoration’ (2021–2030). I remember the conference well. New UN Decade on Ecosystem Restoration offers unparalleled opportunity for job creation, food security and addressing climate change. How planting trees and grasses can help stabilise farmland in a changing climate. Posted about an hour agoFri 3 Aug 2018, 6:20am As parts of the country face the toughest drought in people's lifetimes, tree species that can assist in water and soil management have a renewed purpose. 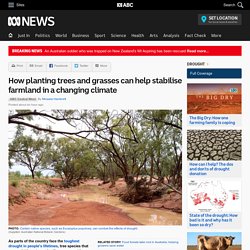 Need to raise your water table, stabilise your soil or grow an alternate fodder source in arid conditions? There is a tree — or grass — for that. Fran Bodkin, a Dharawal elder who has degrees in environmental science, geomorphology and climatology, wrote the Encyclopedia Botanica by hand when pregnant and confined to bed rest. She said farmland could be stabilised naturally to help it cope with a changing climate, and it was as simple as planting a few trees. Técnica transforma areia do deserto em solo fértil para plantio. India planted 66 million trees in one day – smashing the world record.

Update 5 July 2017: The previous record has been broken already, with the news this week that 1.5 million people planted 66 million trees along the Narmada river in the state of Madhya Pradesh. 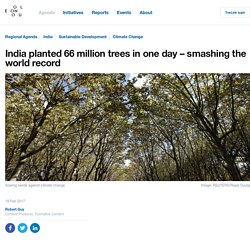 As development in India has raced ahead, demand for firewood, pasture and land for building has destroyed vast tracts of forest. In fact, since 2013, more than 2,500 square kilometres of very dense and mid-dense forests have been wiped out, according to India Today. Despite this, the Indian government reports that the total area of forested land has increased and new efforts are being made to expand them even further.

The ultimate aim is 33% forest cover. O Futuro Climático da Amazônia - Relatório de Avaliação Científica - Centro de Ciência do Sistema Terrestre. Most trees planted in 24 hours (team) - single location. Most trees planted by an individual in 24 hours. 50,000 Trees Planted in 30 Minutes by Indian Volunteers on 10/10/10 - Another Tree Planting Record! Though the trees were planted some 40 kilometers from here, this photo gives you an overview of the type of terrain involved. 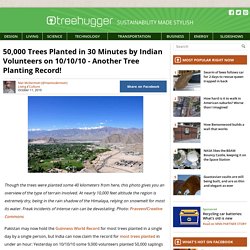 At nearly 10,000 feet altitude the region is extremely dry, being in the rain shadow of the Himalaya, relying on snowmelt for most its water. Freak incidents of intense rain can be devastating. Photo: Praveen/Creative Commons Pakistan may now hold the Guinness World Record for most trees planted in a single day by a single person, but India can now claim the record for most trees planted in under an hour: Yesterday on 10/10/10 some 9,000 volunteers planted 50,000 saplings in just 33 minutes.

Largest Tree Planting in America:... by Jeffrey Barrie. 250K Tree Day is brought to you by Planting trees. 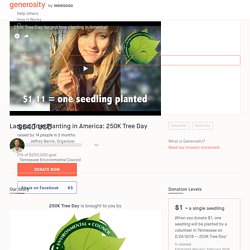 Planting hope. Support the largest tree-planting event in America! 250K Tree Day happens on February 24th, 2018, and engages 25,000+ volunteers in all 95 counties in Tennessee to plant 250,000 native seedlings. Tennessee Environmental Council organizes this event from the ground up -- giving away native tree seedlings at no cost to volunteer tree distributors and planters. Campanha Y Ikatu Xingu. Billion Tree Campaign. The Billion Tree Campaign was launched in 2006, by the United Nations Environment Programme (UNEP) as a response to the challenges of global warming, as well as to a wider array of sustainability challenges from water supply to biodiversity loss.[1] Its initial target was the planting of one billion trees in 2007 (achieved by November).[2] One year later, in 2008, the campaign's objective was raised to 7 billion trees – a target to be met by the climate change conference that was held in Copenhagen, Denmark in December 2009. 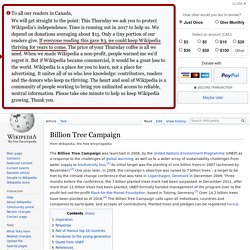 Three months before the conference, the 7 billion planted trees mark had been surpassed. Inspiration[edit] The Billion Tree Campaign was inspired by Nobel Peace Prize Laureate Wangari Maathai, founder of the Green Belt Movement. When an executive in the United States told Professor Maathai their corporation was planning to plant a million trees, her response was: "That’s great, but what we really need is to plant a billion trees. Guia da Muvuca. Seeding Positive Change - Unifying Fields. Unifying Fields seeds positive change by offering governments, organisations and individuals informed choices on how to restore our wellbeing and at the same time care for the planet.

As florestas do Vietnam, a Amazônia e o agente laranja ~ Águas de Pontal. China is building a Great Green Wall of trees to stop desertification. The Gobi Desert, a sparse, desolate and barren region inhabiting the middle-northern border between China and Mongolia. A vast canvas of cascading sand dunes and wide expanses of dry heat waves, shimmering through are works of natural beauty. Novamind – Mind Mapping and Visual Thinking Tool. Technology. Bamboo: a powerful ally for land restoration. By Hans Friederich, Director General, International Network for Bamboo and Rattan (INBAR). Bamboo can be a powerful ally for land restoration. This strategic resource thrives on problem soils and steep slopes, helps to conserve soil and water, and improves land quality. Its potential is significant – if its benefits are recognized by decision makers and planners. Bamboo is an asset to any landscape in which it appears. When strategically placed, the plant forms part of an ‘ecological infrastructure’ that is increasingly acknowledged as a cost-effective way to restore degraded landscapes and adapt to risks posed by climate change.

It grows rapidly, slowing degradation and repairing damaged ecosystems, and its long, fibrous and shallow roots effectively stabilize soil – a bamboo plant typically binds up to 6cm3 of soil, and its efficiency as a soil binder has been reported in China, Costa Rica, India, Nepal, the Philippines, and Puerto Rico. Plant morphology - Wikipedia. Scope[edit] Plant morphology "represents a study of the development, form, and structure of plants, and, by implication, an attempt to interpret these on the basis of similarity of plan and origin. "[3] There are four major areas of investigation in plant morphology, and each overlaps with another field of the biological sciences. Secondly, plant morphology observes both the vegetative (somatic) structures of plants, as well as the reproductive structures. 2. What We Can Do to Restore Vegetation to the Desert : Environmental Activities : Hitachi. In this section we talk to Mr.

Global Restoration Network » Case Studies. Restoration Research at Red Rock Canyon State Park Our efforts for this project were originally focused on the recovery of native annual species, which have been extremely slow to reappear in the more disturbed areas of the South Flat. Restoring Forests: An Opportunity for Africa. New research shows that Africa offers some of the greatest opportunities globally for restoring forests. “The Man Who Stopped the Desert”: What Yacouba Did Next. Where Deserts and Rainforests meet Speech LG16 5 12. Solar desalination of saline soil for afforestation in arid areas: numerical and experimental investigation.