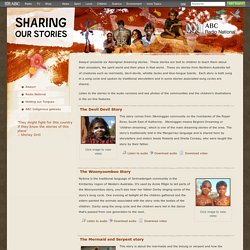 Presents six Aboriginal dreaming stories. These stories are told to children to teach them about their ancestors, the spirit world and their place in that world. These six stories from Northern Australia tell of creatures such as mermaids, devil-devils, whistle ducks and blue-tongue lizards. Each story is both sung in a song cycle and spoken by traditional storytellers and in some stories associated song cycles are shared.

Calendar. Dreamtime, Stories and Songlines - Markets - Tourism Australia. Aboriginal Australians have developed and are bound by highly complex belief systems that interconnect the land, spirituality, law, social life and care of the environment. 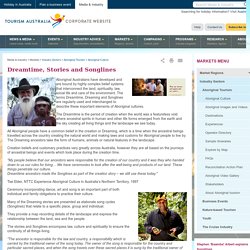 The terms Dreamtime, Dreaming and Songlines are regularly used and interchanged to describe these important elements of Aboriginal cultures. The Dreamtime is the period of creation when the world was a featureless void where ancestral spirits in human and other life forms emerged from the earth and the sky creating all living things and the landscape we see today. All Aboriginal people have a common belief in the creation or Dreaming, which is a time when the ancestral beings travelled across the country creating the natural world and making laws and customs for Aboriginal people to live by. The Dreaming ancestors take the form of humans, animals or natural features in the landscape. 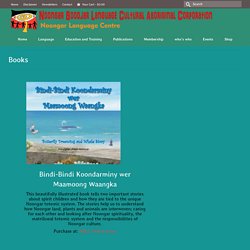 Yok Waakarl wer Yondok – Rainbow Serpent and Crocodile, tells of the creation of the rivers, lakes and waterholes is Wadjak country. It is a story of romance and courage as the mother Rainbow Serpent fights the crocodile from the north to protect Noongar Country. Many Noongar place names are included in this story as we travel with the Waakarl on her journey through Wadjak country. Joondia Jili Jili was a beautiful woman who tried to protect children from the evil magic man. Joondia Jili Jili threw the children into the sky to protect them and they transformed into the beautiful milky-way. Noompat wer Karda – The Numbat and The Racehorse Goanna were two friends; well that was before they wanted to dress-up and show off their teenage colours.

Koodjal Nop is a tale of what can happen when disobedient boys don’t obey their elders. Reviving Australian Aboriginal languages. 00:00:00:00LORENA ALLAM:Linguists and Aboriginal people have to work together to revive languages, but it's an uneasy relationship. 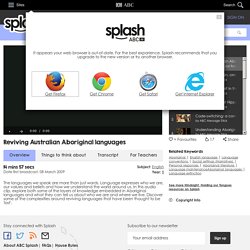 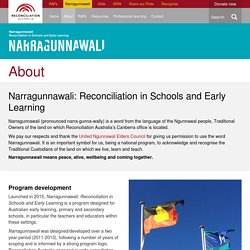 Narragunnawali was designed/developed over a two year period (2011-2013), following a number of years of scoping and is informed by a strong program logic. Reconciliation Australia engaged in wide consultation with both industry experts and stakeholders. We have worked with education providers and organisations in each State and Territory to develop a program that doesn’t duplicate or replicate any of the great work that is being done to build reconciliation across the country.

Key stakeholders include Indigenous Education Consultative Bodies, the Government, Catholic and Independent school sectors and of course teachers, parents and students. Reconciliation Australia. Australian Institute of Aboriginal and Torres Strait Islander Studies. Move your cursor over any area of the map to reveal the 'magnifying glass' circle. 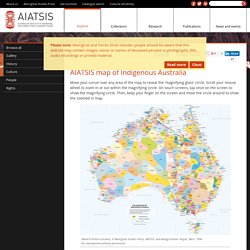 Scroll your mouse wheel to zoom in or out within the magnifying circle. On touch screens, tap once on the screen to show the magnifying circle. Then, keep your finger on the screen and move the circle around to show the zoomed in map. For thousands of years, the original inhabitants of Australia, Aboriginal and Torres Strait Islander peoples occupied the lands with very different boundaries than today, centred on intimate cultural relationships with the land and sea. 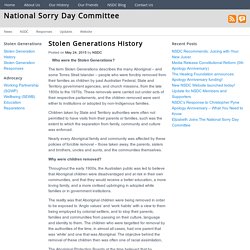 The term Stolen Generations describes the many Aboriginal – and some Torres Strait Islander – people who were forcibly removed from their families as children by past Australian Federal, State and Territory government agencies, and church missions, from the late 1800s to the 1970s. These removals were carried out under acts of their respective parliaments, and the children removed were sent either to institutions or adopted by non-Indigenous families. Kaartdijin Noongar. Australian Institute of Aboriginal and Torres Strait Islander Studies.