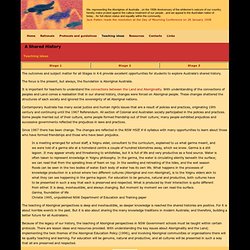 The focus is the present, but always, the foundation is Aboriginal Australia. It is important for teachers to understand the connections between the Land and Aboriginality. With understanding of the connections of peoples and Land comes a realisation that in our shared history, changes were forced on Aboriginal people. These changes shattered the structures of each society and ignored the sovereignty of all Aborignal nations. Aboriginalaustralia - sbpslibraryweblinks. Aboriginal educational contexts. Indigenous Ed. Aboriginal educational contexts. The capture and English education of Bennelong Governor Arthur Phillip organised the capture of Bennelong. 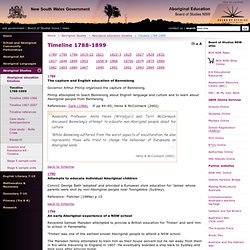 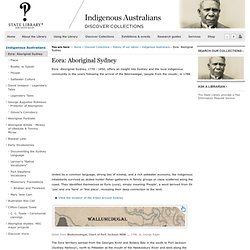 United by a common language, strong ties of kinship, and a rich saltwater economy, the indigenous inhabitants survived as skilled hunter-fisher-gatherers in family groups or clans scattered along the coast. They identified themselves as Eora (yura), simply meaning 'People', a word derived from Ee 'yes' and ora 'here' or 'this place', revealing their deep connection to the land. View the location of the tribes around Sydney Detail from Wallumedegal, Chart of Port Jackson NSW..., 1788, by George Raper The Eora territory spread from the Georges River and Botany Bay in the south to Port Jackson (Sydney Harbour), north to Pittwater at the mouth of the Hawkesbury River and west along the river to Parramatta.