(39) Inside the incredible LEGO House with architect Bjarke Ingels. The science of why stepping on Legos makes you want to die. “I hope you step on a Lego” is such an apt curse that it has become a meme. 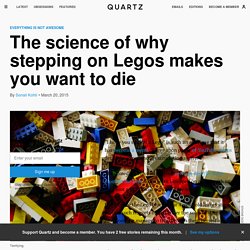 Pages upon pages of YouTube videos detail the experience’s excruciating agony. The comedian Steve Ranazzissi perhaps described the moment the best: “Last week I stepped on a Lego with my bare foot and I almost murdered my whole family.” But why are the Lego blocks your 4-year-old leaves strewn around such nuggets of hell under the soles of your feet? And how does she manage to trip through them herself and continue on her merry way unscathed?

Homes. Microfluidics from LEGO bricks. MIT engineers have just introduced an element of fun into microfluidics. 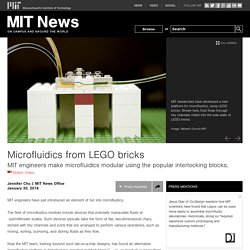 The field of microfluidics involves minute devices that precisely manipulate fluids at submillimeter scales. Such devices typically take the form of flat, two-dimensional chips, etched with tiny channels and ports that are arranged to perform various operations, such as mixing, sorting, pumping, and storing fluids as they flow. Now the MIT team, looking beyond such lab-on-a-chip designs, has found an alternative microfluidics platform in “interlocking, injection-molded blocks” — or, as most of us know them, LEGO bricks. “LEGOs are fascinating examples of precision and modularity in everyday manufactured objects,” says Anastasios John Hart, associate professor of mechanical engineering at MIT. 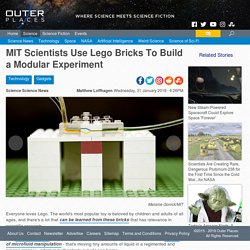 AnthonyThursday, 29 May - 4:15PM Color me hypervigilant, but I'm just a little skeptical when it comes to the benevolence touted by tech companies when it comes to devices, applications, or technology that purport to make my life easier by predicting my needs, analyzing my spending behaviors, tracking my whereabouts, or recording data about my physical health. It's not just that those data points are valuable to marketers, advertisers, and other breathless adherents to the Cult of Big Data that aren't giving me a cut of the profits, it's that I don't want corporations or governments embedding themselves in my every transaction, walk around the block, or trip to the gym.

In a world where every other person seems to be demanding 15 minutes of fame, I'm still holding out for 15 minutes of anonymity. Suffice it to say the announcement by Bloomberg News that Amazon is working on – and perhaps beta-testing – an emotion-detecting wearable device raised the bar for my skepticism. U.S. MIT Scientists Use Lego Bricks To Build a Modular Experiment. How Many Combinations Are Possible Using 6 LEGO Bricks? Mathematician Søren Eilers was intrigued by a LEGO-related math problem. 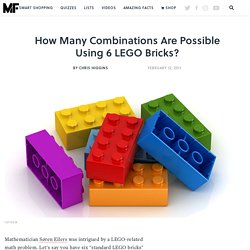 Let's say you have six "standard LEGO bricks" (the rectangular 4x2 bricks seen in the original LEGO patent). If you fit them together, how many possible structures can you make? This question was first officially "answered" in 1974, and LEGO mathematicians arrived at the number 102,981,500. Eilers was curious about the mathematical methodology behind that number, and soon discovered that it only covered one kind of stacking—thus, it was dramatically low. So he wrote a computer program that modeled all the possible brick combinations. A Brief History of the Lego Minifigure. Looking at the history of action figures over the last 50 years, there isn't a single style of figure that's as widely recognized and loved as the Lego minifigure. 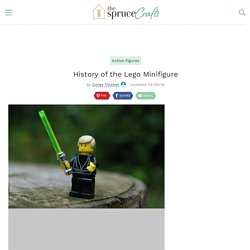 The diminutive blocky yellow figures have captured the imagination of kids for the last 35 years, and still have the action figure community's interest today. Their allure probably lies in their simplicity. Legoland. The entrance of Legoland Deutschland Legoland (trademark in uppercase as LEGOLAND) is a chain of family theme parks, which has its main focus on the toy Lego. 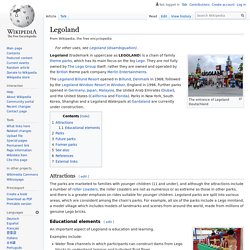 They are not fully owned by The Lego Group itself; rather they are owned and operated by the British theme park company Merlin Entertainments. The Legoland Billund Resort opened in Billund, Denmark in 1968, followed by the Legoland Windsor Resort in Windsor, England in 1996. Further parks opened in Germany, Japan, Malaysia, the United Arab Emirates (Dubai), and the United States (California and Florida). Serious Play - LEGO.com US. The essence The LEGO® SERIOUS PLAY® Method is a facilitated meeting, communication and problem-solving process in which participants are led through a series of questions, probing deeper and deeper into the subject. 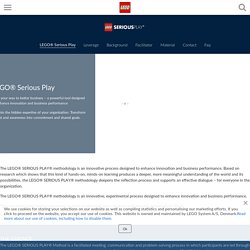 Each participant builds his or her own 3D LEGO® model in response to the facilitator´s questions using specially selected LEGO® elements. These 3D models serve as a basis for group discussion, knowledge sharing, problem solving and decision making. The LEGO® SERIOUS PLAY® Method is a technique which improves group problem solving. By utilizing visual, auditory and kinesthetic skills, the Method requires participants to learn and listen, and it provides all participants with a voice. Gaining confidence and commiting to shared goals A tool for building results. 60 Fun LEGO Facts Every LEGO Fan Needs to Know. Lego® stop motion animation videos & movies.

Legolandfunfacts. What is the plural of Lego? : NoStupidQuestions. Lego. Plastic construction toy. 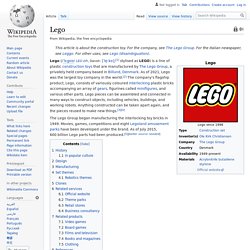