Top tips to reduce your plastic waste - National Geographic Kids. Did you know that every year 400 million tonnes of plastic is produced? 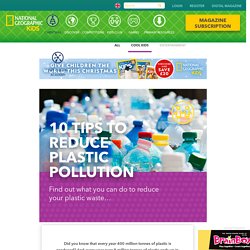 And every year over 8 million tonnes of plastic ends up in our oceans?! This is bad news for our planet’s wonderful wildlife, who get trapped and tangled in our plastic waste – and even eat it by mistake. It’s time to take action! We all need to work to together to reduce plastic pollution and keep our planet a clean, safe place to live. And there are lots of small things we can do to make a big difference… 1) Say no to plastic straws. 2) Use a reusable water bottle. 3) Avoid plastic carrier bags. 4) Snack on fruit, instead of crisps or sweets. 5) Make green goody bags for your next birthday party. 6) Eat your ice cream from a cone. 7) Buy in bulk. 8) Pack an eco-friendly lunch for school and trips out. 9) Never litter! 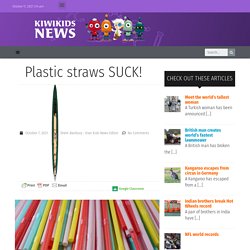 Eco-Friendly Technology Transforms Dryer Lint Into Energy Kids News Article. Clothing made from synthetic materials, such as polyester and nylon, has many positive attributes. 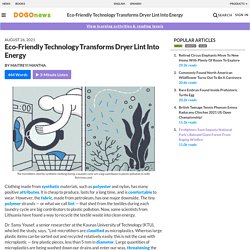 It is cheap to produce, lasts for a long time, and is comfortable to wear. However, the fabric, made from petroleum, has one major downside. The tiny polymer strands — or what we call lint — that shed from the textiles during each laundry cycle are big contributors to plastic pollution. Now, some scientists from Lithuania have found a way to recycle the textile waste into clean energy. Dr. Can we track ocean plastic pollution from space? Australian turtles in real peril from plastics. Most turtles caught off the coast of Queensland had swallowed plastic, a concerning new study shows. 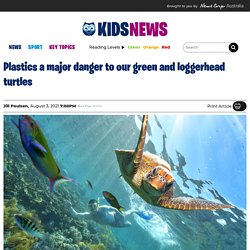 Around 83 per cent of green turtles and 86 per cent of loggerhead turtles found off the coast of Queensland were found to have ingested* plastics. James Cook University Professor Mark Hamann contributed to the study, published in the journal Frontiers in Marine Science, that saw researchers examine the contents of the stomach, intestines, cloaca* and bladder of stranded or bycaught* turtles from the Indian Ocean off Western Australia and the Pacific Ocean off Eastern Australia. Plastic ingestion rates among turtles were generally higher in the Pacific Ocean off the coast of Queensland than in the Indian Ocean off the coast of WA. Professor Hamann said plastic pollution had become one of the most immediate threats to marine wildlife. “It’s estimated that more than 700 marine species, from blue whales to small barnacles, have had interactions with plastics in the oceans,” he said. 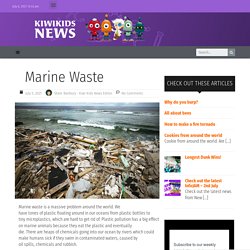 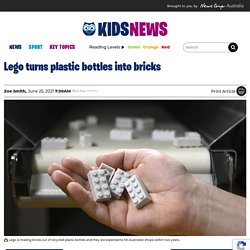 The new recycled prototype* brick, which uses plastic from discarded bottles, is the company’s latest step in its journey to make Lego products from sustainable* materials. It is the first brick made from a recycled material to meet the Danish-based toy giant’s strict quality and safety requirements, including “clutch power” – the classic tubes and studs design that allows the bricks to interlock. A team of more than 150 engineers and scientists in Denmark have been working on the environmentally friendly brick for more than three years, testing more than 250 variations of PET* plastic materials. The new recycled bricks will “work perfectly” with existing Lego bricks and should be on Australian shelves within 18 to 24 months, according to Tim Brooks, vice president of environmental responsibility at the Lego Group.

Lego whiz builds mini hometown. Enterprising Kenyan Engineer Finds An Innovative Solution To Use Plastic Waste Kids News Article. The East African country of Kenya has been at the forefront of the global war on plastic since 2017, when officials outlawed plastic bags. 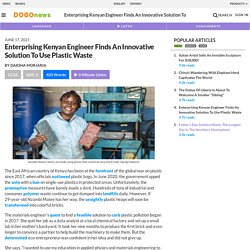 In June 2020, the government upped the ante with a ban on single-use plastics in protected areas. Unfortunately, the preemptive measures have barely made a dent. Hundreds of tons of industrial and consumer polymer waste continue to get dumped into landfills daily. However, if 29-year-old Nzambi Matee has her way, the unsightly plastic heaps will soon be transformed into colorful bricks. The materials engineer's quest to find a feasible solution to curb plastic pollution began in 2017. She says, “I wanted to use my education in applied physics and materials engineering to do something about the problem of plastic waste pollution. Her company, Gjenge Makers, now hires 112 people and produces over 1,500 bricks a day.

The collected plastic is mixed with sand, heated at very high temperatures, and compressed into bricks that vary in color and thickness. Let's Make it Clear: Say NO to Plastics! - Did you know, plastic pollution, including plastic, glass, oil, and chemicals, makes up around 60–95% of all the debris found in the ocean? 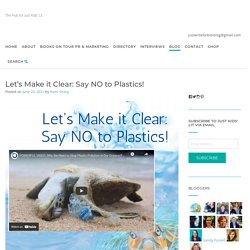 The bulk of this pollution stems from single-use items. Plastic is one of the least biodegradable materials in the world, and can seriously endanger marine life, and even affect our health. This is staggering – experts have estimated that eight million tons of the plastic produced each year goes on to pollute the ocean. Pollution: Plastic bottles could be turned into vanilla ice cream! - CBBC Newsround. Getty Images Plastic in your vanilla ice cream anyone? 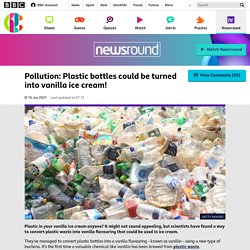 It might not sound appealing, but scientists have found a way to convert plastic waste into vanilla flavouring that could be used in ice cream. Plastic Pact - Classroom - BTN. AMAL: Look you know, there's actually something I've been meaning to talk to you about. 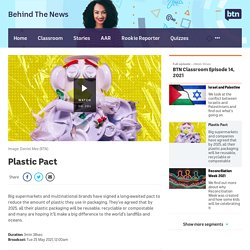 Recycling technology turns masks and gowns into school chairs - CBBC Newsround. Getty Images Gloves and masks like this are used to protect people working in hospitals but have to be thrown away after one use Special thermal heating machines which convert used plastic masks and gowns into reusable plastic blocks have been bought by five hospitals in the UK. Scotland double the price of plastic bags to help the planet - CBBC Newsround. Getty Images Did you know the average family will only recycle about 15 plastic bags each year? The price of plastic bags is doubling in Scotland. From April 1 2021, plastic carrier bags will be 10p rather than the current cost of 5p per bag. It's hoped that the double price will encourage people to think about buying a plastic bag and instead turning to reusable options - like tote bags or bags for life. The idea is that fewer bags being bought should mean less plastic pollution.

Single-use plastics ban expanded under federal government’s National Plastics Plan. Plans to rid Australia of single-use plastics are being stepped up. From July, you’ll no longer be able to buy plastic tableware and other items from Kmart, Target and Coles. Bans on single-use plastics start in the ACT the same month and in Queensland in September. By December, all of Australia Post’s plastic packaging will be made with recycled materials.

And that’s just the beginning. The federal government’s National Plastics Plan, launched by Environment Minister Sussan Ley in Brisbane on March 5, outlines a range of bold* initiatives* that are to be quickly implemented*. Polystyrene packaging and plastic products that are specially designed to break down into smaller pieces, known as microplastics, will be phased* out from July 2022. The Ooho edible water bottle, a V&A Object in Focus. Camels have been dying after mistaking plastic for food. Arid: A description of dry areas of the world, where the climate brings too little rainfall or other precipitation to support much plant growth. bacteria: (singular: bacterium) Single-celled organisms. These dwell nearly everywhere on Earth, from the bottom of the sea to inside other living organisms (such as plants and animals).

Bacteria are one of the three domains of life on Earth.: bezoar: A tightly bound mass of indigestible fiber or other foods (sometimes including hair) that may collect inside the gut of people or animals. Chemical: A substance formed from two or more atoms that unite (bond) in a fixed proportion and structure. Fiber: Something whose shape resembles a thread or filament. Focus: (in behavior) To look or concentrate intently on some particular point or thing. gut: An informal term for the gastrointestinal tract, especially the intestines. landfill: A site where trash is dumped and then covered with dirt to reduce smells.

From Trash to Space Hippie: Nike shoes made from waste. Plastic pollution: Researchers find seagrass can 'catch and remove plastics' - CBBC Newsround. Jordi Regas/University of Barcelona/AFP/Getty These are the Neptune balls which 'capture' plastics and then 'filter' them out of the sea Plastic pollution is a big problem for seas and oceans around the world, but now scientists have discovered a "natural mechanism" for catching and removing plastics from the water. Researchers studied Posidonia oceanica on the coast of Majorca, Spain - it's a species of seagrass known as Neptune Grass which is only found in the Mediterranean sea.

Their study, published in the journal Scientific Reports, found that it can form natural 'Neptune balls' which essentially filter, trap and then remove plastics from the water. Scotland to double the price of plastic bags to help the planet - CBBC Newsround. Microplastics found on Mt Everest – Kiwi Kids News. 1. Who is the main person or group of people in this news article? Plastic pollution: 53 million tonnes could end up in our waters - CBBC Newsround. Getty Images. There could be 200 million tonnes of plastic in the Atlantic, according to new research - CBBC Newsround.

Getty Images. University of Queensland researchers discover high levels of plastic in sardines, prawns, oysters, and crabs. Alarming levels of plastic contamination* have been found in sardines, oysters, prawns and crabs, new research has revealed. A team of University of Queensland researchers, led by PhD candidate Francisca Ribeiro, found significant amounts of microplastic* had been found in a range of edible seafood, most notably sardines, prawns, oysters, and crabs. Plastic: Pollution to reach 1.3 billion tonnes by 2040 - CBBC Newsround.

Getty Images The amount of plastic pollution on Earth could reach 1.3 billion tonnes by 2040. War on Waste: From waste to resource - Geography,Science (4,5,6,7,8,9,10) Kids against plastic. Microplastics: Billions of tiny pieces of plastic are covering the seabed - CBBC Newsround. Getty Images Billions of tiny bits of plastic are sinking to the bottom of the ocean and covering the world's seabeds. Researchers found up to 1.9 million pieces of microplastic in an area covering just one square metre of seabed in the Tyrrhenian Sea. That is the highest level of microplastics ever discovered. Carbios's Plastic-Eating Enzyme May Help Alleviate The World's Pollution Problem Kids News Article. The negative health impacts of plastic on both wildlife and humans have been well-documented. However, the versatile material, which is used for everything from grocery bags to drink bottles to food packaging, is hard to avoid.

Experts estimate that of the 359 million tons of plastics produced annually worldwide, about 150–200 million tons end up in landfills or the environment. Milly Zantow: Recycling Revolutionary. Scientists find bacteria that eats plastic – Kiwi Kids News. Our campaign to ban plastic bags in Bali. What really happens to the plastic you throw away - Emma Bryce. Plastic: Wales wants to lead the way on banning single-use items - CBBC Newsround.

From birth to ban: A history of the plastic shopping bag. How Long Does It Take Plastic To Decompose? Bayuble: Water-soluble fruit stickers. Ending the age of plastic. Curious Kids: How do plastic bags harm our environment and sea life? - The Conversation - ABC Splash - War on Waste: Do we really use 10 million straws a day? We don't know, but it's time to count - Science News - ABC News. How to Eliminate Single-Use Plastics on Vacation. This plastic can be recycled over and over and over. Microplastics in our oceans. TEDxJCUCairns. Straw No More Campaign: 12/06/2018, Behind the News. Plastic Ocean Campaigner: 13/03/2018, Behind the News.