George Torres, Numero Uno No More: Even After His Racketeering Conviction, Questions Remain About Which L.A. Political and Business Figures Were Influenced by His Money - Page 1 - Columns. For anyone wise to the socio-economic realities in blue-collar L.A., and for any of the hundreds of thousands of working-class folks who shopped at Numero Uno grocery stores over the past 20 years, the federal racketeering trial of George Torres in downtown Los Angeles was a chilling affair. 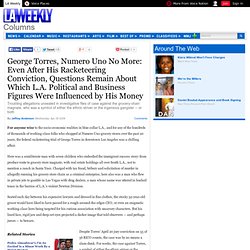 Here was a semiliterate man with seven children who embodied the immigrant success story: from produce route to grocery store magnate, with real estate holdings all over South L.A., not to mention a ranch in Santa Ynez. Charged with tax fraud, bribery and solicitation of murder in allegedly running his grocery store chain as a criminal enterprise, here also was a man who flew in private jets to gamble in Las Vegas with drug dealers, a man whose name was uttered in hushed tones in the barrios of L.A.’s violent Newton Division. Despite Torres’ April 20 jury conviction on 55 of 56 RICO counts, the case was by no means a slam-dunk. Who could that have been? Is that person still in office? News from DEA, Domestic Field Divisions, Los Angeles News Releases, 06/18/07. News Release FOR IMMEDIATE RELEASE June 18, 2007 Contact: SA Sarah Pullen Public Information Officer Number: 213-621-6827 Owners of Numero Uno Markets Arrested on Federal Racketeering Charges Indictment Alleges Murders, Corruption and Harboring of Illegal Aliens JUN 18 -- (LOS ANGELES) – The owner of the Los Angeles-based Numero Uno supermarket chain, his brother, and two associates alleged to be part of a murderous racketeering conspiracy have been taken into custody during a two-day operation that also resulted in the seizure of approximately $1.25 million in cash and more than 60 vehicles. 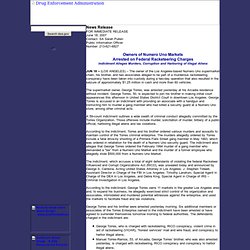 The supermarket owner, George Torres, was arrested yesterday at his Arcadia residence without incident. George Torres, 50, is expected to join his brother in making initial court appearances this afternoon in United States District Court in downtown Los Angeles. A 59-count indictment outlines a wide swath of criminal conduct allegedly committed by the Torres Organization. Numero Uno Versus LAPD. Veteran LAPD cop Greg Kading had since his days as a rookie cop in Newton Division 21 years ago been intensely interested in George Torres, whom he watched rise from lowly food-cart operator to founder of a grocery empire. 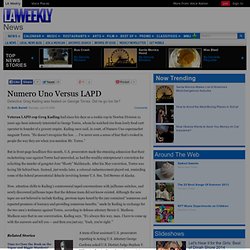 Kading once said, in court, of Numero Uno supermarket magnate Torres, “He doesn’t recognize the law. ... I’ve never seen a sense of fear that’s evoked in people the way they are when you mention Mr. Torres.” But in front-page headlines this month, U.S. prosecutors made the stunning admission that their racketeering case against Torres had unraveled, as had the wealthy enterpreneur’s conviction for soliciting the murder of gangster Jose “Shorty” Maldonado. After his May conviction, Torres was facing life behind bars. Now, attention shifts to Kading’s controversial taped conversations with jailhouse snitches, and newly discovered jailhouse tapes that the defense team did not know existed. A team of four assistant U.S. prosecutors reporting to Acting U.S. George Torres Guilty of Racketeering, Solicitation of Murder. Numero Uno supermarket founder and president George Torres has been convicted today on multiple federal felony charges that include racketeering and solicitation of murder. 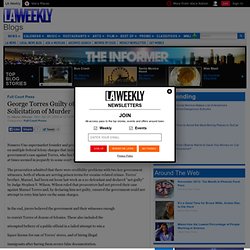 The government's case against Torres, who has been in custody since his June, 2007 arrest, had at times seemed in jeopardy to some court watchers. The prosecution admitted that there were credibility problems with two key government witnesses, both of whom are serving prison terms for cocaine-related crimes. Torres' brother, Manuel, had been cut loose last week as a co-defendant and declared "not guilty" by Judge Stephen V. Wilson. Wilson ruled that prosecutors had not proved their case against Manuel Torres and, by declaring him not guilty, ensured the government could not attempt to retry him later on the same charges.

In the end, jurors believed the government and their witnesses enough. Two portraits of supermarket magnate emerge at L.A. trial. For a man who built his grocery empire store by store in some of Los Angeles County's most crime-ridden and graffiti-scarred neighborhoods, George Torres seemed to fare remarkably well with local gangbangers and taggers. 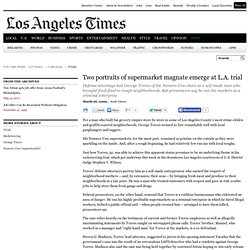 His Numero Uno supermarkets, for the most part, remained as pristine on the outside as they were sparkling on the inside. And, after a rough beginning, he had relatively few run-ins with local toughs. Just how Torres, 52, was able to achieve this apparent status promises to be an underlying theme in his racketeering trial, which got underway this week in the downtown Los Angeles courtroom of U.S.

District Judge Stephen V. Wilson. Torres' defense attorneys portray him as a self-made entrepreneur who earned the respect of neighborhood mothers -- and, by extension, their sons -- by bringing fresh meat and produce to their neighborhoods at a fair price.