The Farce At Kirribilli: Abbott, Shorten Put The Con Back Into Constitutional Reform. The artist Richard Bell once famously proclaimed in an award-winning painting ‘Aboriginal art – it’s a white thing’. 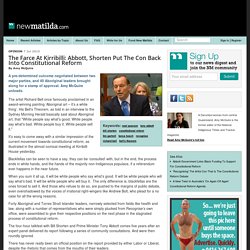 His Bell’s Theorem, as told in an interview to the Sydney Morning Herald basically said about Aboriginal art, that "White people say what's good. White people say what's bad. White people buy it. Push for Indigenous men's remains to be repatriated to Tasmania, honouring 'freedom fighters' Updated An Indigenous activist and medical practitioner wants the remains of two 'freedom fighters', executed in Melbourne more than 170 years ago, repatriated to Tasmania. 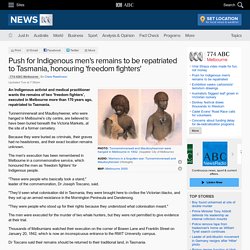 Tunnerminnerwait and Maulboyheener, who were hanged in Melbourne's city centre, are believed to have been buried beneath the Victoria Markets, at the site of a former cemetery. What can we learn about Indigenous history through film? Teaching Indigenous history through Rabbit Proof Fence, Australia and The Sapphires. « makinghistoryatmacquarie. “Aboriginal achievement is like the dark side of the moon, for it is there but so little is known.” 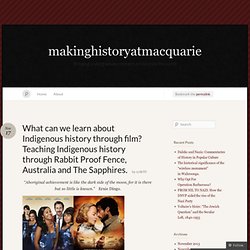 Ernie Dingo. Australian cinema has produced films that represent key aspects of Indigenous history at a time when that history was being questioned and debated. Teaching Indigenous history through film provides an excellent medium for expressions of reconciliation, reflection, education, commentary of a (past) society and the experiences of both individuals and groups.

Films depicting historical narratives provide a unique insight into avenues of Indigenous history previously overshadowed and neglected. Contemporary Australian films, Rabbit Proof Fence (Phillip Noyce, 2002), Australia (Baz Luhrmann, 2008) and The Sapphires (Wayne Blair, 2012) engage with specific historical processes that reflect 21st century public debate such as child removal, Indigenous treatment, land ownership, frontier violence, racism, cultural and gender bias. The First Australians: Ten great films about indigenous Australia - CURNBLOG. The twenty-sixth of January has passed for another year, although most of my readers will be unaware of the significance that the day holds for Australians. 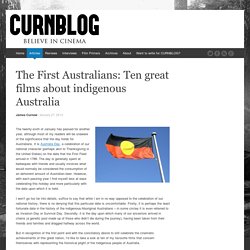 It is Australia Day, a celebration of our national character (perhaps akin to Thanksgiving in the United States) on the date that the First Fleet arrived in 1788. The day is generally spent at barbeques with friends and usually involves what would normally be considered the consumption of an abhorrent amount of Australian beer. However, with each passing year I find myself less at ease celebrating this holiday and more particularly with the date upon which it is held. Walata tyamateetj » Public Record Office Victoria - Archives of the State Government of Victoria. A guide to government records about Aboriginal people in Victoria. walata tyamateetj means ‘carry knowledge’ in the Gunditjmara language of western Victoria. walata tyamateetj is a detailed listing of Aboriginal public records held in Victoria. 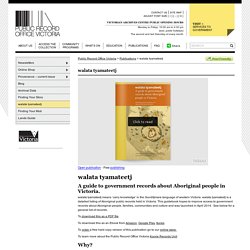 This guidebook hopes to improve access to government records about Aboriginal people, families, communities and culture and was launched in April 2014. See below for a general list of records. To download this as a PDF file To download this as an Ebook from Amazon, Google Play, Itunes. Timeline: Aboriginal deaths in custody. September 28, 2013 marks the 30th anniversary of the death of John Pat, a 16-year-old who died in police custody in Western Australia. 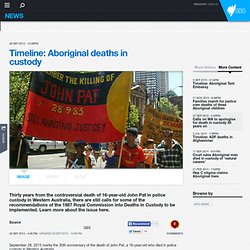 But, as NITV News reports, there are still calls for some of the recommendations of the 1987 Royal Commissioninto Deaths in Custody to be implemented. Learn more about this important issue with these reports from the SBS News Archive. Aboriginal and Torres Strait Islander viewers are warned that these videos contain images of deceased people, including Eddie Murray, John Pat, Robert Walker, Charlie Michaels, Tony King, Dixon Green, Lloyd James Boney, Alfred Daniel Yock, Cameron Doomadgee – all of whom died in police custody. September 1986: Aboriginal families tour Australia to publicise the deaths in custody of their sons. August 1987: Prime Minister Bob Hawke orders a Royal Commission to investigate Aboriginal deaths that had occurred in State and Territory jails. Royal Commission into Aboriginal deaths in custody. 1987: The Royal Commission starts work In 1987 the government led by Bob Hawke decided something must be done about a rising number of complaints that Aboriginal people were dying in suspicious circumstances in police cells. 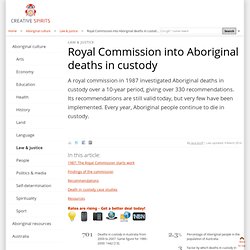 It announced a Royal Commission (a major government public inquiry into an issue) into Aboriginal deaths in custody on 10 August 1987 in response to a growing public concern that such deaths were too common and poorly explained. Hearings began in 1988. The commission initially set out to examine 44 specific cases but that eventually grew to 99, with 32 in Western Australia, 27 in Queensland, 21 in South Australia and the Northern Territory and 19 across NSW, Victoria and Tasmania [24]. The Commission submitted its final report in April 1991. Court rules Aboriginal man died in custody of 'natural causes' On January 19, 2013, Stanley Lord died in custody while serving an 18 month sentence for driving on a disqualified licence. 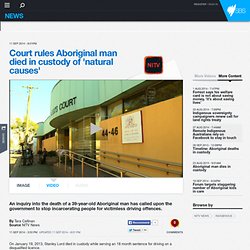 An inquiry into his death was heard at the NSW coroner’s court in Glebe this week. It was confirmed that Mr Lord died of natural causes and that his death was not linked to time spent in custody. But his mother Marlene Lord disagreed with the court's decision. “I didn't think that he was treated the right way like a normal person; I don't think he was treated properly,” she said. On the 5th of July 2012, Mr Lord began his sentence at Wellington Correction Centre in New South Wales. He was transferred to Long Bay's Metropolitan Special Programs Centre on December 12, where his existing heart condition was monitored. The forgotten war that led to Port Phillip's first public executions - Hindsight. In 1842 the fledgling colony of Port Phillip carried out its first public executions, hanging two Aboriginal men who’ve been called everything from bushrangers to freedom fighters. 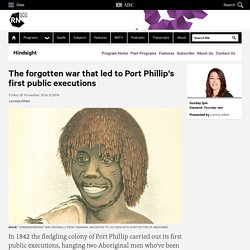 Who were they? Lorena Allam reports. It’s a story of our colonial past that has everything—war, love, courage, treason, betrayal and the gallows—and it all takes place in the heart of Melbourne. This is one of the most incredible stories I’ve ever heard about Aboriginal resistance. John Harding, playwright Playwright John Harding is standing in the forecourt of RMIT on Bowen Street, Melbourne. Those two men were Tasmanian Aborigines, Tunnerminnerwait and Maulboyheener. ‘I think it would have been the end of their world. Harding works at RMIT, and his office overlooks this site. ‘Every day I walk past this place. Aboriginal learning virtual online Australia. Living on climate-changed country: Indigenous health, well-being and climate change in remote Australian communities « Bibliography « Key resources. Abbott Hasn't Joined The Dots On Black Affairs And Climate Change, Says Activist.

Tony Abbott’s ambition to become the “Prime Minister for Aboriginal affairs” doesn’t align with his position on climate change, with First Nations communities the most vulnerable to the disastrous effects of global warming, according to a young Bundjalung environment warrior. 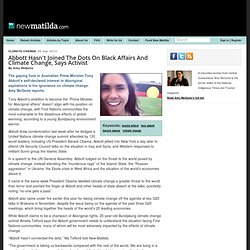 Abbott drew condemnation last week after he dodged a United Nations climate change summit attended by 120 world leaders, including US President Barack Obama. Abbott jetted into New York a day later to attend UN Security Council talks on the situation in Iraq and Syria, and Western responses to militant Sunni group the Islamic State. In a speech to the UN General Assembly, Abbott fudged on the threat to the world posed by climate change, instead elevating the “murderous rage” of the Islamic State, the “Russian aggression” in Ukraine, the Ebola crisis in West Africa and the situation of the world’s economies above it. “Abbott hasn’t connected the dots,” Ms Telford told New Matilda.

Seed - AYCC. Our vision is to empower Indigenous youth to be leaders of the generation wide movement of young people to solve the climate crisis. Already our network has young people from Perth to Yeppoon and Lismore! Now we're expanding the program - with an Indigenous Youth Climate Summit and a high school summit in Alice Springs. Aboriginal and Torres Strait Islander peoples have looked after this land sustainably for tens of thousands of years, this gives us hope that we can do it again. Sign up to get involved and to hear more about Seed. Australia: Sea Level Rise in Kowanyama (Indigenous Perspectives on Climate Change) Australia: Fighting Carbon with Fire (Indigenous Perspectives on Climate Change)

Deaths in custody in Australia to 30 June 2011. Indigenous Australians Fight Climate Change with Fire. Aborigines \'to bear the brunt of climate change\' The effects of climate change on the health of the planet are well documented - but now researchers are studying how human health will suffer. A team of researchers believes indigenous Australians will suffer more severely than the rest of the population. Many of Australia\'s indigenous communities live in hot, dry and remote parts of the country. NCCARF - National Climate Change Adaptation Research Facility. This research explores complex interaction between native title, planning and the social and institutional framework for decision-making on Indigenous held lands in adapting to climate change impacts. Abstract The roles of Indigenous people in climate change adaptation are little understood.

Memmott_2013_Aboriginal_responses_to_climate_change.pdf. Disproportionate burdens: the multidimensional impacts of climate change on the health of Indigenous Australians. For Indigenous Australians, the “health of country” is inextricably linked with human health The impacts of climate change on human health are now being documented in Australia.1 Not surprisingly, these impacts are unequally distributed across our society, as vulnerability depends on a number of factors, including the degree of exposure, sensitivity and adaptive capacity. However, intranational heterogeneity of climate impacts on health has not been adequately documented to date.2 Using this lens, the vulnerability of Australia’s Indigenous people living in remote areas of the country is revealed.

Their vulnerability to climate change is intensified by the social and economic disadvantage they already experience — the result of factors that include decades of inadequate housing and public services, and culturally inappropriate medical services. How Aboriginal burning changed Australia's climate. Web.science.unsw.edu.au/~donnag/Risks from Climate Change to Indigenous Communities in the Tropical North of Australia.pdf. Climate Change and Indigenous Peoples. Speech by Warwick Baird, Director, Native Title Unit, HREOC Native Title Conference 2008 4 June 2008, Perth.

Glory Glory to South Sydney. Endangered languages - Ockham's Razor. Robyn Williams: Languages – we each have one or two or three, and they are good for your brain. They keep it tuned and enrich your culture. Languages also tell us who we are and how we think. So it’s more important than it seems that we preserve as many as we can. Katharine Brisbane: The Future in Black and White. By Katharine Brisbane, AM, Hon.D.Litt. Publisher of Currency Press. Opening the Doors: Aboriginal.

Indigenous History. Aboriginal educational contexts. The capture and English education of Bennelong Governor Arthur Phillip organised the capture of Bennelong. Phillip attempted to teach Bennelong about English language and culture and to learn about Aboriginal people from Bennelong. Original Sapphires search for recordings of musical past. Updated Three members of the Indigenous all-female group the Sapphires, who were immortalised in the Australian movie of the same name, are appealing for help to find photos or old recordings of their songs.

The Sapphires started as a trio with Beverley Briggs, Laurel Robinson and Naomi Mayers in the Shepparton Cummeragunja area of Victoria in the 1950s. The singers grew popular by performing at entertainment venues, army barracks and universities around Melbourne. Despite the Sapphires movie showing four female singers heading to Vietnam to entertain the troops involved in the war in 1968, in fact only Laurel Robinson and her sister Lois Peeler performed.