Naan Wraps with Homemade Cucumber Raita. On weekends I do my shopping at a co-op with a huge selection of food and groceries, but if I need to fill in the gaps during the week I pop into our neighborhood grocery store. 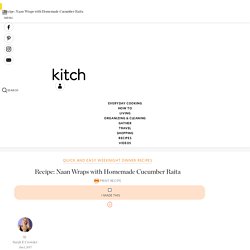 While the options aren't as plentiful, our local store has quite a few draws, like the packaged naan that tastes almost as good as homemade. These naan wraps are a mid-week family favorite. They're filled to the brim with cumin-spiced lamb, shredded iceberg lettuce, and a quick homemade cucumber raita. My favorite thing about the recipe (aside from eating it!) Is that the other components of the naan wraps can be prepared as the ground meat browns, so the meal can be on the table in about 20 minutes.

Serves 4 Arrange a rack in the middle of the oven and heat to 200°F. Heat the oil in a large frying pan over medium-high heat until shimmering. Add the beef or lamb and season with 1/4 teaspoon of the salt. Stack the naan in a pile and completely wrap in aluminum foil. When the meat is ready, remove from the heat. Chili-Rubbed Ribeye Steak with Maple-Bourbon Butter. I am one of those goofballs that, yes, actually gets a kick out of Valentine's Day. 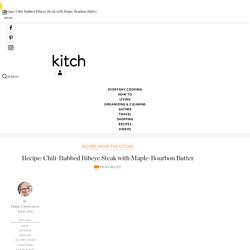 Not in an over-the-top pink hearts and roses kind of a way, but just in that it makes me feel happy. Spinach Lasagna Roll-Ups Vegetarian Recipes from The Kitchn. Way back when, in the practically prehistoric days of the Internet (I'm talking 2009 here), we ran a reader recipe contest. 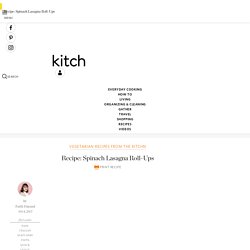 Quick Weeknight Meals gave us a nice collection of really memorable and delicious weeknight meals. Here's one of my personal favorites: Nicole's lasagna roll-ups, which boast the trifecta of being easy, quick, and rather good for you. Upon retesting, these pasta pinwheels turned out to be one of the easiest (and tastiest) dinners I've made all month, and given that they're stuffed with low-fat cottage cheese and oodles of spinach.

Nicole, the originator of this recipe, said about it: "I adore Italian food, and this is an easy and healthy way to end my day. " Easy Turkey Chili with Kale. This turkey chili is one of my favorite recipes, and not just because I've made it a hundred times (at least). 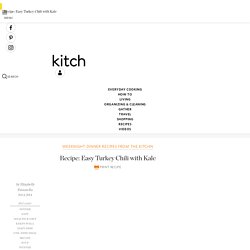 It was one of the first things I created on my own, starting with a version I made in my first minuscule apartment in New York City ten years ago. It has evolved over the years, but this is the recipe I've stuck with for quite some time — I just wanted to wait for the perfect winter day to share it. I know chili is a very sacred dish to some people, especially those from Texas. And I know this one may not look too authentic, given the inclusion of ground turkey and the lack of kidney beans. Slow Cooker Recipe: Savory Maple & Dijon Pot Roast Recipes from The Kitchn. Like many of you, I grew up eating pot roast on a (very) regular basis. 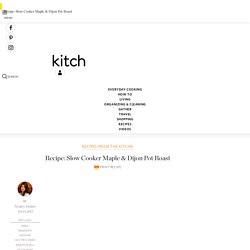 Roasted Chicken Breasts Stuffed with Goat Cheese & Garlic. This recipe is a classic example of cooking by feel. 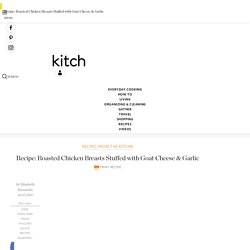 I had some goat cheese left over from an appetizer, and I found fresh, green garlic at the farmer's market. Warm French Lentil Salad. When I first visited Sam’s bungalow while dating long-distance, he had glass jars perched on the kitchen shelves to house his beans and grains, all beautifully labeled and lettered. 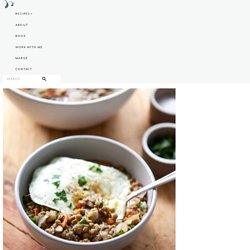 I knew I’d stumbled into something good. On my second visit to Seattle, he broke out the jar of lentils and set out to make me his “famous lentils.” I was a bit skeptical as to how famous they could really be — I’d always known them to be the reliable base for an easy vegetarian soup or the stuff of hippy deli salads. But that afternoon we made hot tea and ate the lentils standing up over the stove, straight from the pot. With the first bite I told Sam — only half kidding — never to make the famous lentils for another woman. 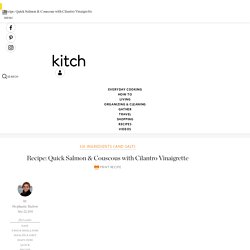 Not only does the recipe come together incredibly quickly (like, 15 minutes!) , but it's something I'd order in a restaurant, and at a fraction of the price. The vinaigrette adds a fresh, bright flavor to otherwise bland couscous and scallions provide a satisfying green crunch to buttery smooth salmon. Baked Halibut with Chimichurri. Though you might normally associate chimichurri with grilled steaks, lamb chops and other robust cuts of meat, this garlicky South American herb sauce pairs wonderfully with mild halibut and other lean white fish. 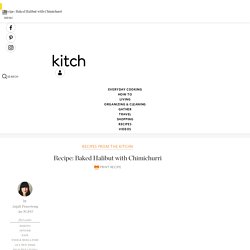 Rubbed over the fillets before baking, the flavor of the chimichurri stays fresh and bright, infusing the delicate fish with a pop of green color and taste that says SPRING! It's another simple yet impressive fish recipe to add to your repertoire. This recipe was born out of boredom. Last spring I was cooking for clients who requested fish several times a week and, after pondering what seemed like the millionth piece of seared halibut in some kind of sauce, I decided to rub the fish in the beautiful chimichurri sauce my co-worker had just mixed up and bake it instead. The resulting fish was lovely: light, delicate and deeply infused with the taste of fresh herbs. This is a beautiful and quick main dish for spring entertaining, as well as a healthy, weeknight-friendly dinner. Baked Panko Rockfish with Gingery Cabbage. One night last December, tucked into a caramel-colored wood booth with a view of the wood-burning oven, I ate my first meal at Chez Panisse. 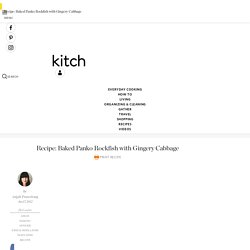 Not only was it memorable for being my first taste of the farm-to-table restaurant that has influenced much of what I cook, it was also my first time eating with a very special group of people: six of my fellow writers for The Kitchn, most of whom I had never met in person before. The meal had many highlights, not all of them easy to reproduce. Simple Salmon Teriyaki. When I moved to Japan in 2005, I was surprised to discover how utterly simple the food was. The sticky, salty sauces and over-the-top sushi rolls I knew from Japanese restaurants back home were as American as hamburgers and French fries, I realized. Japanese food, and especially Japanese home cooking, was actually subtle, nuanced and basically simple, creating a myriad of dishes with a handful of basic pantry staples and the freshest, tastiest produce and proteins available. Mississippi Delta Hot Tamales. There really is nothing quite like a multi-day cooking project to ease winter's biting chill, and with the current temperatures in the single digits I'm sure we could all use an activity to bide our time indoors.

These Southern-style tamales are the perfect way to get your friends and family off the couch and into the kitchen, and a batch is guaranteed to keep your minds occupied and bellies warm! My love for tamales began in Los Angeles a few years ago when I worked with an incredible Salvadoran woman named Hilda, whose love of food was second only to her love of family.

After a tragic earthquake hit El Salvador, she started selling her tamales in an effort to raise money to send back home to her siblings. Brunch Recipe: Chicken Enchilada Omelet. There's no place like Vegas for rockstar chefs to lay their winning cards down on the table — Michelin stars seem to be as plentiful there as penny slot machines. But even the most ambitious eater needs an off-the-strip respite after a globe-trotting (and gluttonous) tour of the Strip. Cold Weather Recipe: Cheesy Chicken and Mushroom Lasagna. Chicken and mushroom lasagna has been a cold weather favorite in our house for a number of years. Its hearty layers of cheesy goodness always warm me up on cold, rainy Southern nights, and it's one of the few leftovers that I actually look forward to more than the main event. This chicken and mushroom lasagna is a simple enough dish to wow your family on a weeknight, but it's also special enough to impress at a dinner party for your foodiest friends.

Kim Kushner's Thanksgivukkah Menu: And Her Recipe for Turkey with Pumpkin, Figs & Honey. (Image credit: Andrew Zuckerman) As you've probably heard, this holiday season includes the once-in-a-lifetime convergence of Thanksgiving and the first day of Hanukkah, an occasion more popularly known as Thanksgivukkah. Cooks all over the country are embracing the opportunity to mix the traditional foods of two holidays on one table, and this week we are sharing Thanksgivukkah recipes and ideas from our favorite chefs and cookbook authors. Today kosher chef and cooking instructor Kim Kushner, author of The Modern Menu, shares her fresh and vibrant holiday menu, including a no-stress recipe for turkey braised with pumpkin, figs and honey. (It will make your kitchen smell amazing!) In the kitchen with: aran goyoaga – Design*Sponge. Aran‘s dessert featured in July was so inviting, I couldn’t fight my curiosity to know what type of savory dish she might cook up.