What role should the state play in economic development?

Projects. The UK government is drawing back the role of the State in the economy, hoping that the private sector will step in, and growth will flourish. 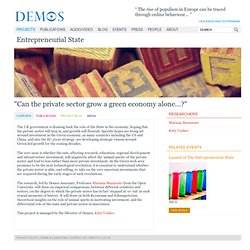 Specific hopes are being set around investment in the Green economy, as many countries including the US and China, and also the EC-2020 strategy, are developing strategic visions around Green-led growth for the coming decades. The core issue is whether the cuts, affecting research, education, regional development and infrastructure investment, will negatively affect the ‘animal spirits’ of the private sector and lead to less rather than more private investment. Entrepreneurial_State_-_web. How Neoliberalism Changed Economic Development: The Examples of India and China. What is financial reform in China? Premier Wen’s recent attack on the Chinese banking system last month has highlighted what was already a very interesting debate on Chinese banks and the Chinese financial system. 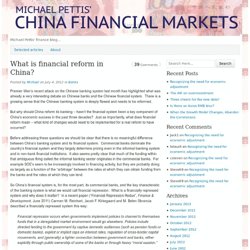 There is a growing sense that the Chinese banking system is deeply flawed and needs to be reformed. But why should China reform its banking – hasn’t the financial system been a key component of China’s economic success in the past three decades? Just as importantly, what does financial reform mean – what kind of changes would need to be implemented for a real reform to have occurred? Before addressing these questions we should be clear that there is no meaningful difference between China’s banking system and its financial system. Creating a Learning Society. Projects. Public money spent on 'digging ditches' won't stimulate the economy. The latest growth figures across Europe prove that the push for austerity has been a dismal failure. In Britain it may take years to recover from the double dip recession. The alternative push for stimulus spending, however, has to go beyond mere investment.

While infrastructure projects are important for employment in the short run, they do not provide the vision for change needed to transform European economies so they can face future technological, environmental and economic challenges. Indeed, the countries that are growing at double digit rates are not only spending, but also have ambitious visions for the direction of public investment.

In the last decade and a half China, which has grown at an annual average of 10%, has increased its spending on research and development by 170%. Similarly Brazil, which grew by 7.5% in 2010, recently announced a fiscal stimulus package of $66bn, aimed at modernising its infrastructure. In Praise of Public Investment: On the importance of Mariana Mazzucato’s article in The Guardian.

Two are the greatest untruths that have inflicted major damage upon our understanding of how social economies work; and, by extension, upon our societies. 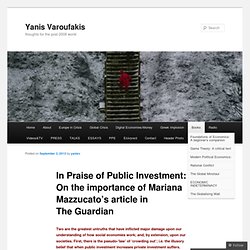 First, there is the pseudo-‘law’ of ‘crowding out’; i.e. the illusory belief that when public investment increases private investment suffers. Secondly, there is a widespread misconception that, under capitalism, value is created privately and then collectivised via the state (when, in truth, all value is produced collectively before it is privatised). In this post, taking my cue from Mariana Mazzucato’s excellent piece in today’s The Guardian, I shall be posting some strong words against the first illusion. Ha-Joon Chang, "Kicking Away the Ladder" Www.paecon.net Post-Autistic Economics Review Kicking Away the Ladder: How the Economic and Intellectual Histories of Capitalism Have Been Re-Written to Justify Neo-Liberal Capitalism Ha-Joon Chang () There is currently great pressure on developing countries to adopt a set of “good policies” and “good institutions” – such as liberalisation of trade and investment and strong patent law – to foster their economic development. 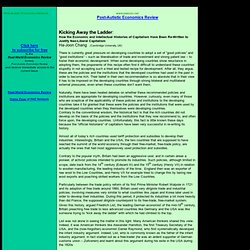 When some developing countries show reluctance in adopting them, the proponents of this recipe often find it difficult to understand these countries’ stupidity in not accepting such a tried and tested recipe for development. Naturally, there have been heated debates on whether these recommended policies and institutions are appropriate for developing countries. Almost all of today’s rich countries used tariff protection and subsidies to develop their industries. Who /Really/ Invented the Internet? “It’s an urban legend that the government launched the Internet.” 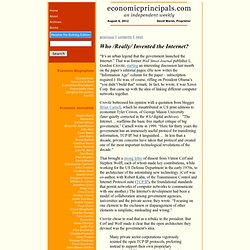 That was former Wall Street Journal publisher L. Gordon Crovitz, starting an interesting discussion last month on the paper’s editorial pages. (He now writes the “Information Age” column for the paper – subscription required.) He was, of course, riffing on President Obama’s “you didn’t build that” remark. In fact, he wrote, it was Xerox Corp. that came up with the idea of linking different computer networks together. Crovitz buttressed his opinion with a quotation from blogger Brian Carnell, which he misattributed in US print editions to economist Tyler Cowen, of George Mason University (later quietly corrected in the WSJ digital archives). ”The Internet… reaffirms the basic free market critique of big government,” Carnell wrote in 1999. Crovitz chose to read that as a rebuke to the president. The ITEF hasn’t gotten the ink that it deserves. Some standards are better-constructed than others.