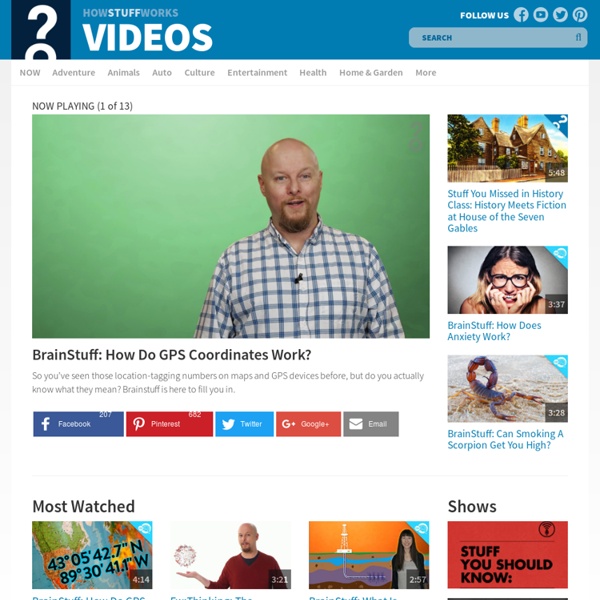 Video Stories QUEST TV – Back to the Wild: Wolves, Seeds and Snapshots Track wolves from their prey’s POV, explore seed diversity, and see the Great Plains from a new angle. Also, tag along with a scientist encouraging native bees to pollinate crops. TAILS Tails includes Tails Installer a custom installer for USB sticks and SD cards. Tails Installer can only install Tails on a USB stick or SD card of at least 4 GB. In order to use Tails Installer, you need to start Tails from another media, and clone it onto the device of your choice, USB stick or SD card. To do that, you can either:

Home Sandrine Ceurstemont, editor, New Scientist TV Thanks for visiting NSTV. This is where you've been finding the best in science videos, from the mysteries of physics and mathematics explained in just 1 minute to eye-watering illusions and mind-bending time-lapses. But now it's time for video to expand throughout our great science coverage. From gene to function: Genome wide study into new gene functions in the formation of platelets In a study into the genetics of blood cell formation, researchers have identified 68 regions of the genome that affect the size and number of platelets. Platelets are small cells that circulate in the blood and are key to the processes of blood clotting and wound healing. In this genome-wide study, the team used a multidisciplinary approach to successfully identify new genetic variants involved in the formation of platelets and more importantly, defined the function of genes near these variants using a series of biological analyses. Abnormally high or low platelet counts can lead to disease.

Rainforest Biomes The tropical rain forest is a forest of tall trees in a region of year-round warmth. An average of 50 to 260 inches (125 to 660 cm.) of rain falls yearly. Rain forests belong to the tropical wet climate group. The temperature in a rain forest rarely gets higher than 93 °F (34 °C) or drops below 68 °F (20 °C); average humidity is between 77 and 88%; rainfall is often more than 100 inches a year. 15 Awesome Chemistry Experiments You don’t need to watch Breaking Bad to know that chemistry is pretty awesome. Below we explore our favorite 15 chemistry GIFs. Melting Metal With Magnets The Science: The copper wire has a significant amount of AC electricity running through it, causing it to act like a really strong electromagnet.

TEN MYTHS ABOUT CAPITALISM Capitalism in the neoliberal version has exhausted itself. Financial sharks do not want to lose profits, and shift the main burden of debt to the retirees and the poor. A ghost of the “European Spring” is haunting the Old World and the opponents of capitalism explain people how their lives are being destroyed. This is the topic of the article of a Portuguese economist Guilherme Alves Coelho. There is a well-known expression that every nation has the government it deserves.

ScienceChannel Upload science.discovery.com Subscription preferences Loading... Acquired traits can be inherited via small RNAs Columbia University Medical Center (CUMC) researchers have found the first direct evidence that an acquired trait can be inherited without any DNA involvement. The findings suggest that Lamarck, whose theory of evolution was eclipsed by Darwin's, may not have been entirely wrong. The study is slated to appear in the Dec. 9 issue of Cell.

Zoom Rainforest Advertisement. EnchantedLearning.com is a user-supported site. As a bonus, site members have access to a banner-ad-free version of the site, with print-friendly pages.Click here to learn more. (Already a member? Click here.) What is a Rainforest? Junior Science & Humanities Symposium March 6-8, 2014 Hosted by: The University of Nevada Reno Lodging will be at: Circus Circus Reno Hotel, 500 North Sierra Street Reno, NV 1-800-992-2694