Related articles: The role of Afrikaners 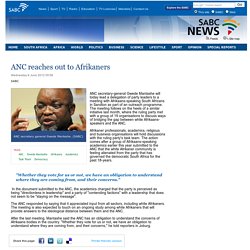 (SABC) ANC secretary-general Gwede Mantashe will today lead a delegation of party leaders to a meeting with Afrikaans-speaking South Africans in Sandton as part of an outreach programme. The meeting follows on the heels of a similar initiative last month, where the ruling party met with a group of 19 organisations to discuss ways of bridging the gap between white Afrikaans-speakers and the ANC. Afrikaner professionals, academics, religious and business organisations will hold discussions with the ruling party's task team. Solidarity doubts legitimacy of ANC, Afrikaners meeting :Wednesday 6 June 2012. ANC secretary general, Gwede Mantashe. 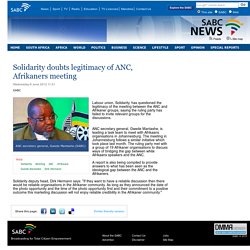 (SABC) Labour union, Solidarity, has questioned the legitimacy of the meeting between the ANC and Afrikaner groups, saying the ruling party has failed to invite relevant groups for the discussions. ANC secretary general, Gwede Mantashe, is leading a task team to meet with Afrikaans organisations in . The meeting in follows a similar initiative which took place last month. The ruling party met with a group of 19 Afrikaner organisations to discuss ways of bridging the gap between white Afrikaans speakers and the ANC. A report is also being compiled to provide answers to what has been seen as the ideological gap between the ANC and the Afrikaners. Solidarity deputy head, Dirk Hermann says: "If they want to have a reliable discussion then there would be reliable organisations in the Afrikaner community. An Inquiry launched into a whites-only Afrikaner village:Friday 16 November 2012.

Gauteng leaders are concerned, especially, that police have been denied access(SABC) Gauteng officials are conducting an inquiry into a "white only" Afrikaner cultural village in Kleinfontein, southeast of Pretoria. 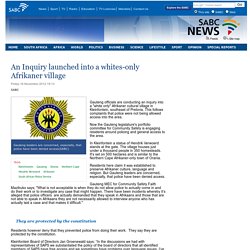 This follows complaints that police were not being allowed access into the area. Now the Gauteng legislature's portfolio committee for Community Safety is engaging residents around policing and general access to the area. In Kleinfontein a statue of Hendrik Verwoerd stands at the gate. The village houses just under a thousand people in 350 homesteads. Residents here claim it was established to preserve Afrikaner culture, language and religion. Gauteng MEC for Community Safety Faith Mazibuko says; "What is not acceptable is when they do not allow police to actually come in and do their work or to investigate any case that might happen. They are protected by the constitution Residents however deny that they prevented police from doing their work. Government to meet with The Boere Afrikaner Volksraad:Thursday 24 July 2014. They have agreed to meet government. 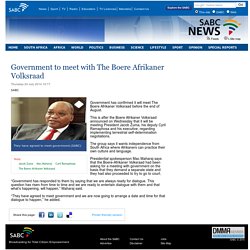 (SABC) Government has confirmed it will meet The Boere Afrikaner Volksraad before the end of August. This is after the Boere Afrikaner Volksraad announced on Wednesday that it will be meeting President Jacob Zuma, his deputy Cyril Ramaphosa and his executive, regarding implementing terrestrial self-determination negotiations. The group says it wants independence from South Africa where Afrikaners can practice their own culture and language. Presidential spokesperson Mac Maharaj says that the Boere-Afrikaner Volksraad had been asking for a meeting with government on the basis that they demand a separate state and they had also proceeded to try to go to court. “Government has responded to them by saying that we are always ready for dialogue.

“They have agreed to meet government and we are now going to arrange a date and time for that dialogue to happen,” he added. President Zuma reassures Afrikaners :Thursday 19 February 2015. President Jacob Zuma says he will fight against those who suppress minorities. 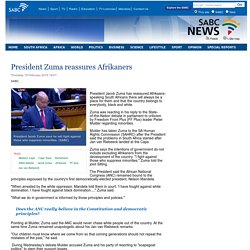 (SABC) President Jacob Zuma has reassured Afrikaans-speaking South Africans there will always be a place for them and that the country belongs to everybody, black and white. Zuma was reacting in his reply to the State-of-the-Nation debate in parliament to criticism by Freedom Front Plus (FF Plus) leader Pieter Mulder regarding minorities. Mulder has taken Zuma to the SA Human Rights Commission (SAHRC) after the President said the problems in South Africa started after Jan van Riebeeck landed at the Cape. Zuma says the intentions of government do not include excluding Afrikaners from the development of the country. The President said the African National Congress (ANC) remained bound to the principles espoused by the country's first democratically-elected president, Nelson Mandela.

"When arrested by the white oppressor, Mandela told them in court: 'I have fought against white domination.