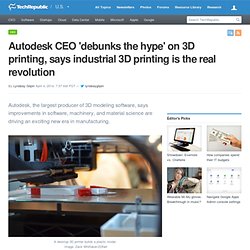 While most consumers are waiting for desktop 3D printers to become their personal Star Trek replicators, the real magic in the 3D printing world is happening in the industrial space, according to Carl Bass, CEO of Autodesk, who gave the keynote address Friday morning at the Inside 3D Printing Conference and Expo in New York City. "I think industrial 3D printing is extremely important," Bass said. "We have way overvalued consumer 3D printing and truly underappreciated the value of industrial 3D printing.

" This is specifically important to the manufacturing industry, which he said will be transformed by 3D printing. Autodesk, an international software company, is the world's largest maker of 3D printing modeling tools. "I think the hype takes two forms, there's two extremes," Bass said. Whitney Tilson To Present His Short Thesis On Organovo [REPORT] Organovo: Citron Research Issues 'URGENT Trading Warning' Citron Research has a new sell recommendation on Organovo Holdings Inc (NYSE: ONVO), which can be viewed below. 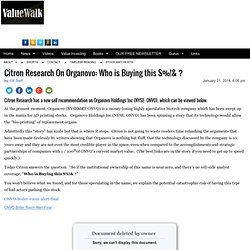 At the present moment, Organovo (NYSEMKT:ONVO) is a money-losing highly speculative biotech company which has been swept up in the mania for 3D printing stocks. Organovo Holdings Inc (NYSE: ONVO) has been spinning a story that its technology would allow the “bio-printing” of replacement organs. Admittedly this “story” has sizzle but that is where it stops. Citron is not going to waste readers time rehashing the arguments that have been made tirelessly by writers showing that Organovo is nothing but fluff, that the technology discussed by the company is 10 years away and they are not even the most credible player in the space, even when compared to the accomplishments and strategic partnerships of companies with 1 / 100thof ONVO’s current market value. 3-D Printer Stocks That Rose Together Now Share the Fall. After tearing up the stock market for most of the year, shares of 3-D printers are taking a major hit this week, thanks to short sellers. 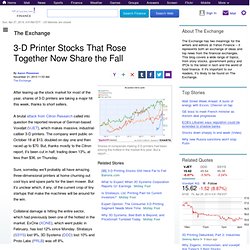 A brutal attack from Citron Research called into question the reported revenue of German-based Voxeljet (VJET), which makes massive, industrial-caliber 3-D printers. The company went public on October 18 at $13, doubled on day one and then raced up to $70. But, thanks mostly to the Citron report, it’s been cut in half, trading down 13%, at less than $36, on Thursday. Sure, someday we’ll probably all have amazing three-dimensional printers at home churning out cool toys and spare parts for the lawn mower. But it’s unclear which, if any, of the current crop of tiny startups that make the machines will be around for the win. Collateral damage is hitting the entire sector, which had previously been one of the hottest in the market. Risks of specialty sectors That represented sales of just three 3-D printers. Health Care IndustryFinanceStratasys. 5 Things to Watch for in the 3-D Printing Sector in 2014.

There's so much going on in the 3-D printing sector that it can be hard to keep track of who's on first. 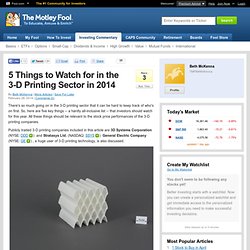 So, here are five key things -- a hardly all-inclusive list -- that investors should watch for this year. All these things should be relevant to the stock price performances of the 3-D printing companies. Publicly traded 3-D printing companies included in this article are 3D Systems Corporation (NYSE: DDD ) and Stratasys Ltd. (NASDAQ: SSYS ) General Electric Company (NYSE: GE ) , a huge user of 3-D printing technology, is also discussed. Source: Flickr - no edits made No 1: 3D Systems progress with Project AraLast November, 3D Systems, which is the largest (by revenue) publicly traded 3-D printer manufacturer, announced that it was teaming with Google's Motorola unit on Project Ara. Given how fast things move in the tech world -- and 3D Systems is especially known for its aggressive moves -- it seems likely there will be some relevant news about this project in 2014. 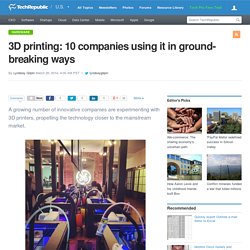 From the big whig corporations down to the smallest startups, there are plenty of companies utilizing 3D printers to create new products, improve old ones, and better their business processes. As the technology becomes more accepted in the enterprise, it will quickly become more mainstream. We've compiled a list of 10 companies innovatively using 3D printers. 1. General Electric General Electric made big investments in 3D printing in their quest to produce more than 85,000 fuel nozzles for the new Leap jet engines. 2. The airline company was one of the early adopters of 3D printing technology, and has made more than 20,000 3D printed parts for 10 different military and commercial planes. 3. Ford also teamed with 3D Systems Sugar Lab around Valentine's Day this year to 3D print an edible 2015 Mustang model, made from chocolate and sugar. 4. 5. 6. 7. 8. 9.