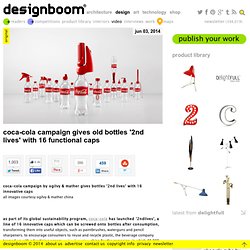 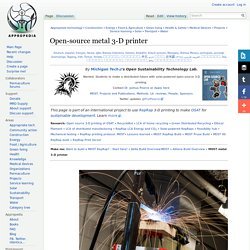 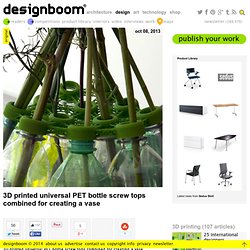 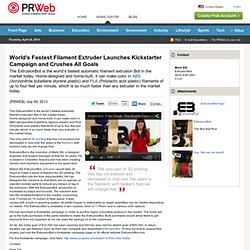 Home-designed and home-built, it can make color in ABS (Acrylonitrile butadiene styrene plastic) and PLA (Polylactic acid plastic) filaments of up to four feet per minute, which is so much faster than any extruder in the market today. The only part of 3D printing that has not evolved and decreased in cost over the years is the filament; with backers help we will change that. ExtrusionBot is the invention of Mark Dill, a designer, engineer and project manager at Intel for 20 years. He is based in Chandler, Arizona and has been creating electric and mechanic equipment in his spare time. Before the ExtrusionBot, extruders would take 24 hours to make a spool of filament for 3D printing. 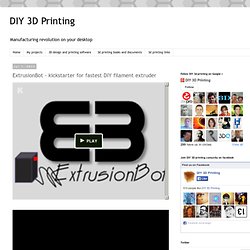 What other machines do in a day, we do in an hour... ExtrusionBot gives you the speed to produce the quantity of filament with out the wait.ExtrusionBot has the smallest foot print on the market. Only 7in x 10in. 83-year-old inventor wins $40,000 award for his DIY filament extruder. Mar.4, 2013 On March 2, 2013 Zach Kaplan, CEO of online store Inventables, presents a giant check to inventor and competition winner Hugh Lyman. 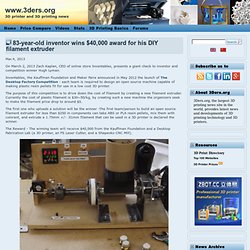 Inventables, the Kauffman Foundation and Maker Faire announced in May 2012 the launch of The Desktop Factory Competition - each team is required to design an open source machine capable of making plastic resin pellets fit for use in a low cost 3D printer. The purpose of this competition is to drive down the cost of filament by creating a new filament extruder. Currently the cost of plastic filament is $30~50/kg, by creating such a new machine the organizers seek to make the filament price drop to around $5. The first one who uploads a solution will be the winner -The first team/person to build an open source filament extruder for less than $250 in components can take ABS or PLA resin pellets, mix them with colorant, and extrude a 1.75mm +/- .01mm filament that can be used in a 3D printer is declared the winner. 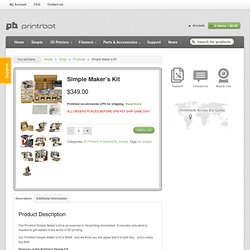 It includes only what is needed to get started in the world of 3D printing. Our Printrbot Simple Maker’s Kit is $349 , and we think you will agree that it is both tiny…and a really big deal. Features of the Printrbot Simple Kit: The 2014 model comes standard with Aluminum Extruder and Aluminum print bed for $3490.1mm resolution (and beyond)100mm cube of printing volume (~4″ cube)Printrboard electronicsPLA only (no heat bed)Ubis 1.75mm Hotend200lb. test fishing line – the X & Y “belts”12v 6A laptop style power supplyOuter dimensions: 7″ x 8″ x 9″~5.25lb total weightSample of 1.75mm PLA filamentFan and end stops includedLaser cut wood parts are standard 1/4″ (6mm) thick Printrbot does not guarantee the technical proficiency of it’s customers.

Simply stated; If you order a Printrbot kit, we cannot guarantee that you have the technical ability to assemble and calibrate the Printrbot. Store. 25 (Free) 3D Modeling Applications You Should Not Miss. 3D-modeling tools help turn individual ideas into beautiful models and prototypes for a variety of fields. 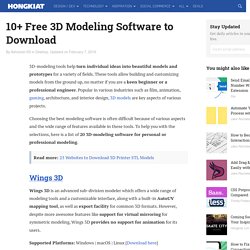 These tools allow building and customizing models from the ground up, no matter if you are a keen beginner or a professional engineer. Popular in various industries such as film, animation, gaming, architecture, and interior design, 3D models are key aspects of various projects. Choosing the best modeling software is often difficult because of various aspects and the wide range of features available in these tools. 16 Free 3D modeling software to create your own 3D models at no cost. Autodesk 123D - Free 3D Modeling Software, 3D Models, DIY Projects, Personal Fabrication Tools. 3DTin. Tinkercad - Mind to design in minutes. 3D printing services in your neighborhood. Category: Art. View More. 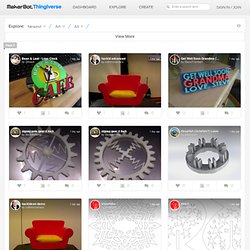 Monitor: More than just digital quilting. As Patent Drama Continues, 3D Printing Provides A Way Out For Mashup Creators. Editor’s note: Michael Weinberg is vice president at Public Knowledge where he focuses primarily on copyright, issues before the FCC and emerging technologies like 3D printing. 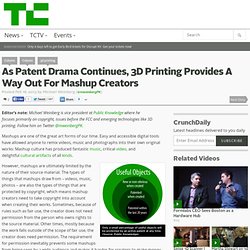 Follow him on Twitter @mweinbergPK. Mashups are one of the great art forms of our time. Easy and accessible digital tools have allowed anyone to remix videos, music and photographs into their own original works: Mashup culture has produced fantastic music, critical video, and delightful cultural artifacts of all kinds. However, mashups are ultimately limited by the nature of their source material. The types of things that mashups draw from – videos, music, photos – are also the types of things that are protected by copyright, which means mashup creators need to take copyright into account when creating their works. David Laser Scanner offers DIY, low-cost 3D recording solution. A home 3D printer to turn your ideas into real objects.