3D-printed bones? New 'hyperelastic' material could let doctors print implants on demand. Researchers have developed a synthetic 'hyperelastic bone' that can be customized using a 3D-printer and implanted in the body to mend damaged bones. 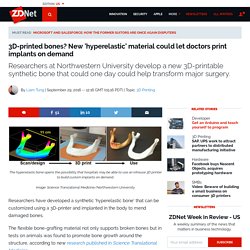 The flexible bone-grafting material not only supports broken bones but in tests on animals was found to promote bone growth around the structure, according to new research published in Science Translational Medicine. The material, developed by a team of researchers at Northwestern University, acts as both structural support and a kind of scaffold for bone regeneration. Also, lab rats didn't reject the material, which makes it a promising aid to conventional treatments, such as metal plates and rods, for fractured arms and other bone repair surgery. While both adult and children patients may benefit from the hyperelastic bone (HB), the researchers said it will have a greater impact where metallic implants are used to treat bone defects in children, since these implants often need to be replaced as the child's body grows.

Nasa just emailed a wrench to space. When International Space Station commander Barry Wilmore needed a wrench, Nasa knew just what to do. 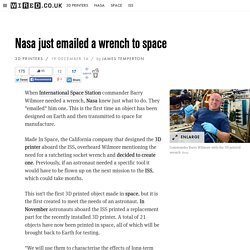 They "emailed" him one. This is the first time an object has been designed on Earth and then transmitted to space for manufacture. Made In Space, the California company that designed the 3D printer aboard the ISS, overheard Wilmore mentioning the need for a ratcheting socket wrench and decided to create one. Previously, if an astronaut needed a specific tool it would have to be flown up on the next mission to the ISS, which could take months. This isn't the first 3D printed object made in space, but it is the first created to meet the needs of an astronaut. 3D Printing Service UK. Hyrel 3D Printer Can Squirt Out Self-Setting Sugru And Even Play-Doh. The Hyrel 3D printer looks like any other single-extruder additive printer. 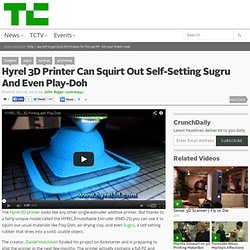 But thanks to a fairly unique nozzle called the HYREL Emulsifiable Extruder (EMO-25) you can use it to squirt out usual materials like Play-Doh, air-drying clay, and even Sugru, a self-setting rubber that dries into a solid, usable object. The creator, Daniel Hutchison funded his project on Kickstarter and is preparing to ship the printer in the next few months. The printer actually contains a full PC and raised $150,000 on Kickstarter. 3-D printer going to space station in 2014. Made in Space. 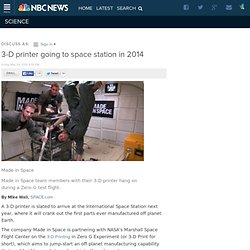 Made In Space Zero-G 3D Printer Going To ISS. Mars-bound astronauts will print food & tools, NASA says. NASA will transport 3D printers to space so astronauts can print tools — and potentially even food. 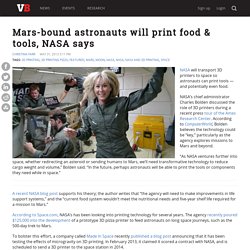 NASA’s chief administrator Charles Bolden discussed the role of 3D printers during a recent press tour of the Ames Research Center. According to ComputerWorld, Bolden believes the technology could be “key,” particularly as the agency explores missions to Mars and beyond. “As NASA ventures further into space, whether redirecting an asteroid or sending humans to Mars, we’ll need transformative technology to reduce cargo weight and volume,” Bolden said. “In the future, perhaps astronauts will be able to print the tools or components they need while in space.” From VentureBeat Ready to think outside the (ad) box? A recent NASA blog post supports his theory; the author writes that “the agency will need to make improvements in life support systems,” and the “current food system wouldn’t meet the nutritional needs and five-year shelf life required for a mission to Mars.” In Tomorrow's Wars, Battles Will Be Fought With a 3-D Printer. 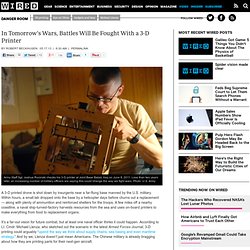 Joshua Rucinski checks his 3-D printer at Joint Base Balad, Iraq on June 8, 2011. Less than two years later, an increasing number of military officers are saying this could change the way we fight wars. Photo: U.S. Army. Why 3D Printing Is Overhyped (I Should Know, I Do It For a Living) 3D Burrito – Home page. Online marketplace '3D Burrito' for 3D printed objects - find3dprinter. An online marketplace for 3D printed designs hits the web. 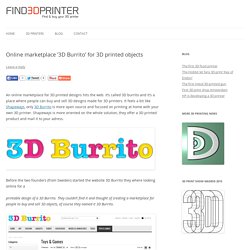 It’s called 3D burrito and it’s a place where people can buy and sell 3D designs made for 3D printers. It feels a bit like Shapeways, only 3D Burrito is more open source and focused on printing at home with your own 3D printer. Shapeways is more oriented on the whole solution, they offer a 3D printed product and mail it to your adress.

3D printing - What can you print? 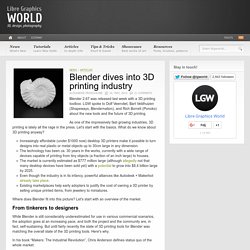 LGW spoke to Dolf Veenvliet, Bart Veldhuizen (Shapeways, Blendernation), and Rich Borrett (Ponoko) about the new tools and the future of 3D printing. As one of the impressively fast growing industries, 3D printing is lately all the rage in the press. Let's start with the basics. What do we know about 3D printing anyway? Increasingly affordable (under $1000 now) desktop 3D printers make it possible to turn designs into real plastic or metal objects up to 30cm large in any dimension. TED 2013: 4D printed objects 'make themselves' 28 February 2013Last updated at 05:39 ET By Jane Wakefield Technology reporter Video of cube self-folding strand courtesy Self-Assembly Lab, MIT/Stratasys Many are only just getting their heads around the idea of 3D printing but scientists at MIT are already working on an upgrade: 4D printing. 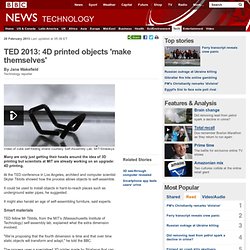 At the TED conference in Los Angeles, architect and computer scientist Skylar Tibbits showed how the process allows objects to self-assemble. Here's the 3D-printing institute in Obama's State of the Union. A little over a year ago, 3D printing was a funky new technology that you might find at modestly sized booths in the basement level of the Las Vegas Convention Center at CES . 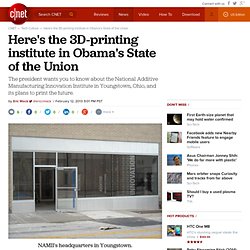 Tonight, President Obama mentioned it in the same breath as Apple and Intel during his State of the Union address, while talking about ways to create new jobs and manufacturing in the United States. Here's the passage from the transcript: After shedding jobs for more than 10 years, our manufacturers have added about 500,000 jobs over the past three. Caterpillar is bringing jobs back from Japan. Ford is bringing jobs back from Mexico. The notion that Youngstown, Ohio, is the epicenter of the 3D-printing revolution probably came as news to many people who have never heard of the National Additive Manufacturing Innovation Institute that the president referenced.

The institute did provide a preview of the sorts of projects it may be interested in pursuing. 3D Printing and Design. Will 3D printing revolutionise manufacturing? 28 July 2011Last updated at 00:09 By Peter Day Presenter, In Business Loughborough University's machines can even print larger structures such as building materials With the creation of many products - including building materials - now possible at the touch of a button, will 3D printing sound the death knell for mass production?

#1 3D Printer for Direct Manufacturing. 3D printing helps firms make parts. 3D-printed miniaturised fluidic devices. A variety of milli- and microfluidic devices printed in polypropylene using the 3D Touch printer. Image credit: Geoffrey J T Cooper/Lee Cronin/University of Glasgow. So Now There’s A 3D Printer In A Briefcase. It seems like not a week goes by without some mention of 3D printers somewhere. This time around, MIT students Ilan Moyer and Nadya Peek have developed Popfab, a 3D printer in a briefcase.

PopFab is a multi-tool for the 21st century. At its heart is a computer-controlled motion platform and a means of attaching various toolheads. These enable PopFab to make objects from a digital plan in a variety of ways: current capabilities include 3D printing, milling, vinyl cutting, and drawing — with more on the way. PopFab has traveled the world as a carry-on item of luggage to Saudi Arabia and Germany, and within the USA to Aspen in Colorado. There doesn’t seem to be any definite plans for commercialization but as a proof of concept, it’s pretty nifty. Suppliers of 3D Printers. Foodini is a 3D printer for everything from burgers to gnocchi.

HP Designjet 3D Printer Now On Sale, Churns Out Solid Plastic Objects From the Desktop. Remember back in January when HP announced it would bring a tabletop 3-D printer to market, at a place and time to be named later? That place and time just became a quite a bit less ambiguous. Today Stratasys, the company that is manufacturing the device for HP, announced that it has shipped the first units of the HP-branded Designjet 3D fabrication machines, which will be available in May -- but only in Europe.

The Designjet 3D is based on Stratasys's Fused Deposition Modeling (FDM) technology, which turns three-dimensional CAD drawings into tangible prototypes by extruding partially molten ABS plastic in extremely fine layers one atop the other, forming the entire 3-D model in a single piece from the ground up. 3D printing. An ORDbot Quantum 3D printer. 3D printing or additive manufacturing[1] is a process of making a three-dimensional solid object of virtually any shape from a digital model. 3D printing is achieved using an additive process, where successive layers of material are laid down in different shapes.[2] 3D printing is also considered distinct from traditional machining techniques, which mostly rely on the removal of material by methods such as cutting or drilling (subtractive processes).

A 3D printer is a limited type of industrial robot that is capable of carrying out an additive process under computer control. The 3D printing technology is used for both prototyping and distributed manufacturing with applications in architecture, construction (AEC), industrial design, automotive, aerospace, military, engineering, dental and medical industries, biotech (human tissue replacement), fashion, footwear, jewelry, eyewear, education, geographic information systems, food, and many other fields. 2009 3D Printer Buyer's Guide. More design hobbyists, entrepreneurs use 3-D printing. Matt Sullivan, a retired soldier, still has trouble explaining his right leg to strangers. The shiny chrome surface, embossed with the lightning bolt logo of his beloved San Diego Chargers, covers the calf area of his prosthetic leg, the result of a roadside bomb in Afghanistan in 2010. At the naval hospital where he was recovering from his wounds and the resulting surgery, Sullivan ran into entrepreneur Scott Summit, who suggested a solution to covering the metal rod that protruded conspicuously from his knee.