Researchers find a way to 3D print whole objects in seconds. 3D printing the human heart - College of Engineering at Carnegie Mellon University. A team of researchers from Carnegie Mellon University has published a paper in Science that details a new technique allowing anyone to 3D bioprint tissue scaffolds out of collagen, the major structural protein in the human body. 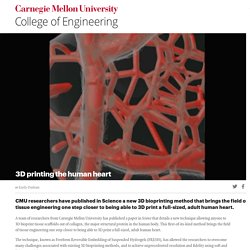 This first-of-its-kind method brings the field of tissue engineering one step closer to being able to 3D print a full-sized, adult human heart. The technique, known as Freeform Reversible Embedding of Suspended Hydrogels (FRESH), has allowed the researchers to overcome many challenges associated with existing 3D bioprinting methods, and to achieve unprecedented resolution and fidelity using soft and living materials. Each of the organs in the human body, such as the heart, is built from specialized cells that are held together by a biological scaffold called the extracellular matrix (ECM).

This network of ECM proteins provides the structure and biochemical signals that cells need to carry out their normal function. Columbia University researchers create 3D-printed wood with realistic internal grain. Engineers at Columbia University have 3D-printed a block of "digital wood", using a voxel technique that enables the creation of objects with rich internal textures. 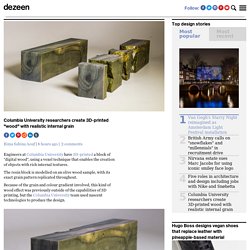 The resin block is modelled on an olive wood sample, with its exact grain pattern replicated throughout. Because of the grain and colour gradient involved, this kind of wood effect was previously outside of the capabilities of 3D printing, but the Columbia University team used nascent technologies to produce the design. First, they used destructive tomographic imaging to photograph ultra-fine slices of the wood, cut to just 27 micro-metres (0.027 millimetres) in width by a CNC mill. The stack of 230 images was then fed to a Stratasys J750 PolyJet printer, which is capable of printing various colours and materials using voxels. Voxels are like pixels in 3D space – they are the smallest elements into which an object can be divided in the design process. Russian firm announces world's largest construction printer. A Russian firm has announced commencement on the world's largest 3D construction printer, capable of printing an entire six-storey building before you can say "regulatory compliance". 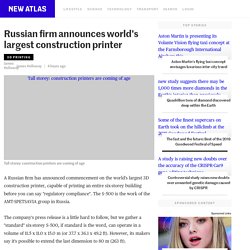 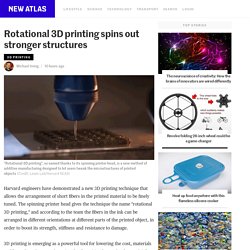 The spinning printer head gives the technique the name "rotational 3D printing," and according to the team the fibers in the ink can be arranged in different orientations at different parts of the printed object, in order to boost its strength, stiffness and resistance to damage. 3D printing is emerging as a powerful tool for lowering the cost, materials and know-how for manufacturing, by depositing layer after layer of "ink" to build up an object. But the maximum resolution of these printers means that the microstructures of the material often can't be directly controlled. Laser holograms create 3D-printed objects in seconds, no layering required. How do you create complex 3D-printed objects in seconds, instead of hours or days? 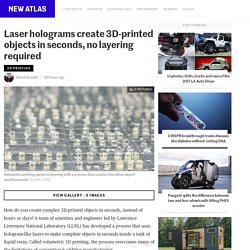 A team of scientists and engineers led by Lawrence Livermore National Laboratory (LLNL) has developed a process that uses hologram-like lasers to make complete objects in seconds inside a tank of liquid resin. Called volumetric 3D printing, the process overcomes many of the limitations of conventional additive manufacturing. Additive manufacturing, better known as 3D-printing, promises to revolutionize prototyping and manufacturing, but it's a process that, for all its promise, has its limitations.

Student builds €10 3D printer from old inkjet printers. Inkjet printers may be a fairly inexpensive way to print out your holiday snaps, but they can be fragile machines and end up at the city dump well before they hit kindergarten age. 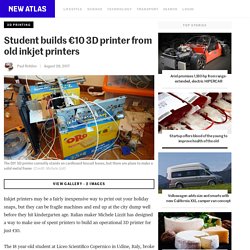 Italian maker Michele Lizzit has designed a way to make use of spent printers to build an operational 3D printer for just €10. The 18 year-old student at Liceo Scientifico Copernico in Udine, Italy, broke apart three old inkjet printers and a flatbed scanner and used their parts for the project's mechanical components. 100x faster, 10x cheaper: 3D metal printing is about to go mainstream. We've been hearing for years now about 3D printing and how it's going to revolutionize manufacturing. 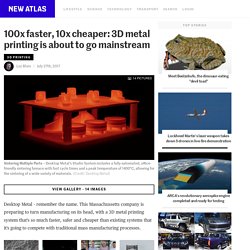 As yet, though, it's still on the periphery. Plenty of design studios and even home users run desktop printers, but the only affordable printing materials are cheap ABS plastics. And at the other end of the market, while organizations like NASA and Boeing are getting valuable use out of laser-melted metal printing, it's a very slow and expensive process that doesn't seem to scale well. 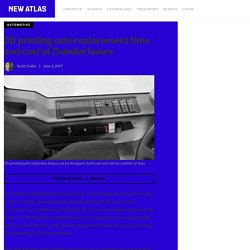 Now, Daimler has turned to the process for replacement parts in buses. The move allows complex interior components to be economically made in small batches, with shorter turnaround times than possible using conventional production methods. This isn't the first time Daimler has turned to 3D printing for replacement parts – last year, the company announced it would be using Selective Laser Sintering to produce 30 plastic truck components. Before that, the process was also used to develop more than 100,000 prototype components. When a bus operator needs a specific replacement part, they simply need to order the part based on its specific order code. It isn't just simple, single-piece components that Daimler is printing. Source: Daimler. Novel 3D printer puts continuous printing on the table. At the heart of many of today's 3D printers is a stationary print bed, which means that if you want to print a really, really long object like a company logo for above the office door or hollow tubing, it would likely take several print runs and some glue. 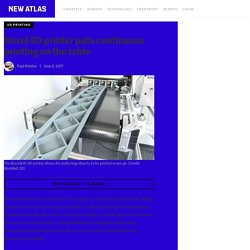 The BlackBelt from Stephan Schürmann replaces the print bed of old with a conveyor belt, which allows for continuous printing. Currently the subject of a Kickstarter funding campaign, the BlackBelt has been 3 years in development – going for CAD-modeled concept to prototype to production ready. Its carbon fiber composite conveyor belt allows for continuous printing of long objects, with the option of going really, really long by placing a roller module unit in front of the conveyor belt, or continuous batch production of smaller single build parts, which can be collected in a bin at the end.

3D Printing with plants is cheaper, stronger and more environmentally friendly. Engineers at MIT have developed a way to use plant cellulose as a feedstock for 3D printers, providing another renewable, biodegradable alternative to popular petroleum-based polymers like ABS currently being used. 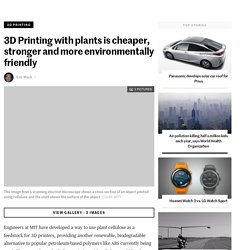 The researchers also believe printing with cellulose could be cheaper and stronger than other materials and even offer potential antimicrobial properties to boot. "Cellulose is the most abundant organic polymer in the world," says MIT postdoc Sebastian Pattinson, lead author of a paper describing the new technique. "Cellulose and its derivatives are used in pharmaceuticals, medical devices, as food additives, building materials, clothing – all sorts of different areas. MIT applies soft touch to robots with programmable 3D-printed skins. Spectators of the DARPA Robotics Challenge finals in 2015 would have noticed that many of the competing robots were padded up for protection in case they took a tumble. MIT's Computer Science and Artificial Intelligence Laboratory (CSAIL) is looking to build customizable shock-absorbing protection into robots by using 3D printing to produce soft materials that not only dampen the impact of falls, but also allows them to carry out safer, more precise movements.

‘this method of 3D printing makes it possible to produce medium to large scale metal objects with almost total form freedom.’ video courtesy of ‘arc’ bicycle team ‘it was important for us to design a functional object that people use everyday,’ says industrial design engineering student and ‘arc’ bicycle team member stef de groot. Five students made up the ‘arc’ bicycle team: stef de groot (industrial design engineering, TU delft) This is the first object 3D-printed from alien metal. But today Planetary Resources is showing that it can do the last item on that list: building with metals not from Earth.

At its booth at CES this year, the company is showing off a 3D-printed part that was made from a material not of this planet. Specifically, the company took material from a meteorite that landed in Argentina in prehistoric times, processed it and fed it through the new 3D Systems ProX DMP 320 direct metal printer. The result is a small 3D-printed model of a part of a spacecraft that resembles the Arkyd spacecraft that Planetary Resources is testing. It's not spectacular in a vacuum -- but the fact that Planetary Resources and 3D Systems were able to successfully make a print using meteorite material is an important first step toward realizing the company's vision.

Ultimaker 2 3D printer pushes the limits of speed and accuracy. Ultimaker, which was born in 2011 as an outgrowth of the RepRap project, and which quickly grew to become an important player in the home consumer 3D printing market, has announced its second generation 3D printer. Boasting improved reliability, user-friendliness, and an increased print volume. "We are an independent company, we don't have outside investors," explained Erik de Bruijn, Ultimaker co-founder, at the Ultimaker 2's public unveiling. "I think if we can all start to see the world not as a fixed thing, but as an environment that we can actually shape together [...], building on top of each other's work, then it would be a very big irony if the devices that we used to do that [...] would be a closed environment.

Wacky tape gun produces life-size CAD-assisted wireframe models. Using a handheld packing tape dispenser gun that has been modified to fold, extrude, and cut tape into tubes, a team of researchers from the Hasso-Plattner-Insitut (HPI) at the University of Potsdam has created a method of transferring computer-generated wire-frames to the real world. Dubbed the "Protopiper" by its creators, the device is not only capable of producing full-size outline objects, it is also able to produce hinges, bearings, and axles to give them opening doors, drawers, and movement just like the real things. Thinking outside the square, the team from HPI sought a better, cheaper, quicker way to produce real-world wireframe models than the usual plastic tubes. Standard plastic packing tape was the team's solution.

Easily formed into tubes which have a good strength-to-weight ratio and already being adhesive-backed it makes surprisingly sturdy, quickly-assembled structures. As mentioned, the tube is also cut as it leaves the device. New 3D-printing tech set to enable patient-specific medical devices. Most medical devices come in standard sizes, but people – as you've probably noticed – vary widely in their shape and size. Sick or premature babies especially can run afoul of this system, as their tiny bodies leave much less room for error in inserting or attaching devices at the correct spot. The future of 3D printing lies in space and with an extra dimension. MultiFab mixes and matches 10 different materials in a single 3D print. Watch: This new type of 3D printing was inspired by Terminator 2. 3D Printing an Earbud Holder with Dremel's 3D Idea Builder. Wonder-ink could soon let you 3D print objects out of stretchy graphene. History, Travel, Arts, Science, People, Places.