FABtotum - Microwave-sized 3D Copier in $1,000 - A Multi-purpose Personal Fabrication Device. The FABtotum is a multipurpose "personal fabrication device" — about to crush its goal on Indiegogo — that combines the technology of a 3D printer, a 3D scanner, and a CNC milling machine all in one microwave-sized package. 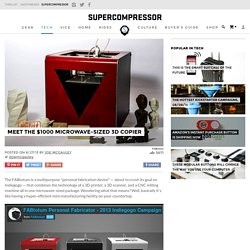 Wondering what that means? Well, basically it's like having a hyper-efficient mini manufacturing facility on your countertop. Not only can it turn out plastic objects seemingly from thin air (like any other desktop 3D printer currently on the market), but it can make perfect digital copies — and subsequent printed plastic duplicates — of any relatively small object, much like the Photon 3D Scanner. 3D All in One - XYZprinting. New Liquid-Based 3D Printer Takes Minutes, Not Hours. Carbon-fiber epoxy honeycombs mimic the material performance of balsa wood. Cambridge, Mass. – June 25, 2014 – In wind farms across North America and Europe, sleek turbines equipped with state-of-the-art technology convert wind energy into electric power. 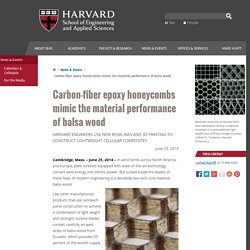 But tucked inside the blades of these feats of modern engineering is a decidedly low-tech core material: balsa wood. Optical photograph of a translucent hexagonal honeycomb printed using the baseline epoxy ink with ~1 vol.% carbon fibers added for visualization. The aligned black fibers are clearly visible within the cell walls and throughout the structure. The complete structure is 3 mm high and 30 x 40 mm in area, with cells that are 6 mm from wall to wall. (Image courtesy of Brett G. Like other manufactured products that use sandwich panel construction to achieve a combination of light weight and strength, turbine blades contain carefully arrayed strips of balsa wood from Ecuador, which provides 95 percent of the world’s supply. Lewis and Brett G. MOD-t 3D printer to launch on indiegogo May 28, priced below $300. May 15, 2014 A week ago, we reported on a new 3D Printer, the 'MOD-t' by startup New Matter. 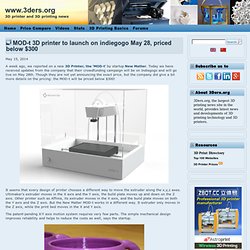 Today we have received updates from the company that their crowdfunding campaign will be on Indiegogo and will go live on May 28th. Though they are not yet announcing the exact price, but the company did give a bit more details on the pricing: the MOD-t will be priced below $300! Dutch 3D printer maker Builder announces new color mixing feature. Jun 4, 2014 Dutch 3D printer manufacturer Builder announces today a new and unique feature: color mixing for its Builder 3D Printers. 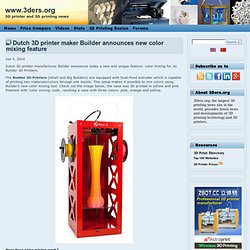 The Builder 3D Printers (small and Big Builders) are equipped with Dual-Feed extruder which is capable of printing two materials/colors through one nozzle. This setup makes it possible to mix colors using Builder's new color mixing tool. Check out the image below, the vase was 3D printed in yellow and pink filament with 'color mixing' code, resulting a vase with three colors: pink, orange and yellow. Singapore startup looking to raise $75,000 for cheapest PrintM3 Delta 3D printer.

Jun 6, 2014 A startup based in Singapore has launched an Indiegogo crowd funding for a printer called PrintM3 which is available to pledge for $249. 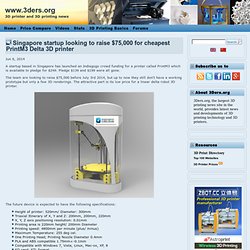 Pledge $139 and $199 were all gone. The team are looking to raise $75,000 before July 3rd 2014, but up to now they still don't have a working prototype but only a few 3D renderings. The attractive part is its low price for a linear delta robot 3D printer. The future device is expected to have the following specifications: Height of printer: 520mm/ Diameter: 300mm Triaxial Itinerary of X, Y and Z: 200mm, 200mm, 220mm X, Y, Z axis positioning resolution: 0.01mm Printing area is 220mm height/ 200mm Diameter Printing speed: 4800mm per minute (plus/ minus) Maximum Temperature: 255 deg cel. According to KiKi Tae of the team, the RRP is $899 and the earliest shipment will be in October 2014.

ORD Solutions offers free 3D printer in exchange for a name for MH3000 v2. Jun 10, 2014 Cambridge, Ontario based Canadian company ORD Solutions has announced that they are looking for a new name for their 5 nozzle 3D Printer MH3000 version 2 and they'll give a free printer to the submitter of the name they use! 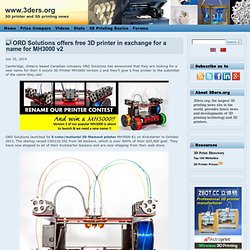 ORD Solutions launched its 5 color/material 3D filament printer MH3000 R1 on Kickstarter in October 2013. The startup raised CAD116,592 from 96 backers, which is over 400% of their $25,000 goal. They have now shipped to all of their Kickstarter backers and are now shipping from their web store. A new version of their printer, currently labelled the MH3000 R2 is in development, and will be launched on Kickstarter this summer. The MH3000 R2 printer features: ORD Solutions invites all residents of Canada and the United States to enter the "RENAME OUR PRINTER" contest. Director of Marketing, Jenn Gibson, said of the contest: "We have been racking our brains trying to think up a name that accurately reflects our printer's strengths, and we've come up blank.

For space ceramics or Swamp Thing replicas: applications abound with Kai Parthy's 3D printing materials. June 15, 2014 | By Cynthia In the past, the experimental 3D printing filaments of inventor Kai Parthy have gotten our attention. 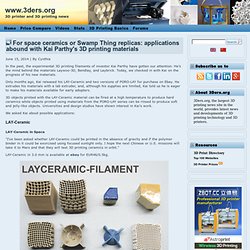 He's the mind behind the materials Laywoo-3D, Bendlay, and Laybrick. Today, we checked in with Kai on the progress of his new materials. The voxeljet (VJET) IPO Primer: The Company With a Little "v" Could Make a Big Splash « 3DPrintingStocks.com. The voxeljet (VJET) 3D Printing IPO UPDATE: 10/16/2013: Final pricing to be determined Thursday 10/17 and trading to begin Friday 10/18. 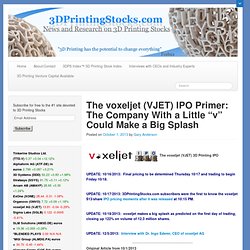 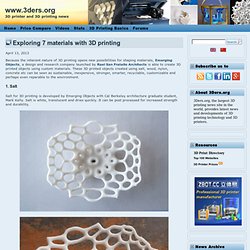 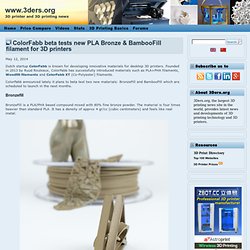 Founded in 2013 by Ruud Rouleaux, ColorFabb has successfully introduced materials such as PLA+PHA filaments, Woodfill filaments and ColorFabb XT (Co-Polyester) filaments. ColorFabb announced lately it plans to beta test two new materials: BronzeFill and BambooFill which are scheduled to launch in the next months. Bronzefill. Discov3ry extruder expands your 3D printer to print silicone, clay & icing sugar. May 13, 2014 Home based 3D printing is currently limited to printing plastics, but Canada-based Structur3d Printing is creating an add-on extruder to enable almost any desktop 3D printer to print a whole new range of paste-like materials. Structur3D's Discov3ry extruder is an affordable, plug and play device which can easily be integrated with MakerBot, RepRap, Ultimaker and most other DIY 3D printers.

This will enable makers to print a whole new range of materials, including silicone, polyurethane and icing sugar. New tool gives structural strength to 3-D printed works. Objects created using 3-D printing have a common flaw: They are fragile and often fall apart or lose their shape. "I have an entire zoo of broken 3-D printed objects in my office," said Bedrich Benes, an associate professor of computer graphics at Purdue University. The printed fabrications often fail at points of high stress. "You can go online, create something using a 3-D printer and pay $300, only to find that it isn't strong enough to survive shipping and arrives in more than one piece," said Radomir Mech, senior research manager from Adobe's Advanced Technology Labs. Engineers pave the way towards 3-D printing of personal electronics. Scientists are developing new materials which could one day allow people to print out custom-designed personal electronics such as games controllers which perfectly fit their hand shape.

The University of Warwick researchers have created a simple and inexpensive conductive plastic composite that can be used to produce electronic devices using the latest generation of low-cost 3D printers designed for use by hobbyists and even in the home. The material, nicknamed 'carbomorph', enables users to lay down electronic tracks and sensors as part of a 3D printed structure -- allowing the printer to create touch-sensitive areas for example, which can then be connected to a simple electronic circuit board. So far the team has used the material to print objects with embedded flex sensors or with touch-sensitive buttons such as computer game controllers or a mug which can tell how full it is.

The research was led by Dr Simon Leigh in the Department of Engineering at the University of Warwick. Inkjet-based circuits created at fraction of time and cost. Researchers from Georgia Tech, the University of Tokyo and Microsoft Research have developed a novel method to rapidly and cheaply make electrical circuits by printing them with commodity inkjet printers and off-the-shelf materials. For about $300 in equipment costs, anyone can produce working electrical circuits in the 60 seconds it takes to print them. The technique, called instant inkjet circuits, allows the printing of arbitrary-shaped conductors onto rigid or flexible materials and could advance the prototyping skills of non-technical enthusiasts and novice hackers. "We believe there is an opportunity to introduce a new approach to the rapid prototyping of fully custom-printed circuits," said Gregory Abowd, Regents' Professor in the School of Interactive Computing at Georgia Tech and an investigator in the study.

"Unlike existing methods for printing conductive patterns, conductivity in our technique emerges within a few seconds and without the need for special equipment. " Scientists build a low-cost, open-source 3-D metal printer. Until now, 3D printing has been a polymer affair, with most people in the maker community using the machines to make all manner of plastic consumer goods, from tent stakes to chess sets. 3D printer makes a teddy bear with needle and thread - tech - 15 May 2014. FROM aircraft to houses and even guns, just about anything can be 3D printed – as long as it's not soft and squishy. MIT Media Lab: 3-D printing with variable densities. Thingiverse - Digital Designs for Physical Objects. This Liquid Metal With an Instant Shell Could Revolutionize 3-D Printing. 3D metal printing.

3D Printing of Liquid Metals at Room Temperature. Mark One: Carbon Fiber 3D Printer. 3D printers are evolving ridiculously fast, and here’s the next step, a 3D printer that prints in carbon fiber. The best thing is that It’s only going to cost $5000, which is comparable to regular 3D printers on the market. The desktop printer is also capable of printing in fiberglass, nylon, and the thermoplastic PLA, as well as a composite of these materials with layers of carbon fiber added for strength. The main advantage of the Mark One: It can print parts 20 times stiffer and five times stronger than ABS, according to the company. ‘Anti-Gravity’ 3D Printer Uses Strands to Sculpt Shapes on Any Surface. Turn Your Plastic Recyclables Into 3D Printing Spools With Filabot.

Source: Filabot 3D printers are getting cooler every day, but there’s one component integral to 3D printing that normally gets overlooked – that is, until you have to pay for it. As many 3D hobbyists have no doubt discovered, the one time cost of the printer can be quickly dwarfed by feeding it spool after spool of raw plastic. At $40 or more per spool, an avid hobbyist can see his or her enthusiasm rapidly diminished.