This cheap 3D-printed home is a start for the 1 billion who lack shelter. Food, water, and shelter are basic human needs, but 1.2 billion people in the world live without adequate housing, according to a report by the World Resources Institute’s Ross Center for Sustainable Cities. 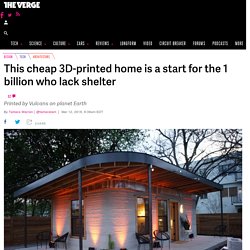 Today at SXSW, an Austin-based startup will unveil its approach to combat that deficiency by using low-cost 3D printing as a potential solution. ICON has developed a method for printing a single-story 650-square-foot house out of cement in only 12 to 24 hours, a fraction of the time it takes for new construction. If all goes according to plan, a community made up of about 100 homes will be constructed for residents in El Salvador next year. The company has partnered with New Story, a nonprofit that is vested in international housing solutions. A robot can print this $64,000 house in as few as 8 hours — take a look inside.

Shapeways - Design, buy, and sell products with 3D Printing. 3D printing. 3D printing and scanning. 3D Printing. Researchers 3D Print a Whale Graveyard. My Region - 3D printer by Sask. man gets record crowdsourced cash. CADdetails.com - Designing in 3D.url. Automated Manufacturing for 3-D Printers. In theory, 3-D printing gives consumers the ability to conceive of and make various products. But designing many objects requires specialized knowledge of geometry, materials, and manufacturing processes. Researchers at PARC are now building software tools meant to automate that kind of judgment. The goal, says PARC CEO Stephen Hoover, is to build programs that enable non-experts to “kind of think their way through a design space” before sending any instructions to the printer. Participants in a growing online community of enthusiasts have already uploaded hundreds of thousands of designs for 3-D-printed objects.

The problem is that in conventional production settings, manufacturing engineers who are well versed in the design constraints imposed by specific materials and manufacturing methods “eliminate a whole set of choices at the beginning because they know what can cause problems down the road,” says Hoover (see “The Difference Between Makers and Manufacturers”). 6-meter tall KamerMaker to 3D print Amsterdam house by year's end.url. It is surely now but a matter of time before we are reporting on the completion of the first 3D-printed house, or at least something purported to be such a thing. 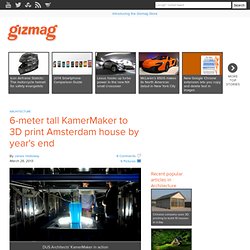 Amsterdam-based DUS Architects is the latest company to show its hand, and has developed its own 3D printer, the 6-meter (20-foot) tall KamerMaker (literally, RoomMaker), with the intention of 3D printing a house before the end of the year. View all The intention is that the KamerMaker will print building components on site. The machine can print components, fabricated from polypropylene, up to 2.2 by 2.2 by 3.5 meters (7.2 by 7.2 by 11.5 feet) in size. It's hoped that in future the KamerMaker will be able to print objects from recycled plastic. 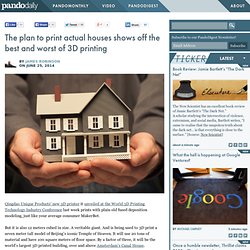 But it is also 12 meters cubed in size. A veritable giant. And is being used to 3D print a seven meter tall model of Beijing’s iconic Temple of Heaven. It will use 20 tons of material and have 100 square meters of floor space. Hands on: Structure Sensor turns your iPad into a 3D scanning machine. Last year, California-based Occipital closed out a wildly successful Kickstarter for its Structure Sensor, an iPad-mountable structured light scanner that can perceive the world in three dimensions by projecting infrared dots on things. 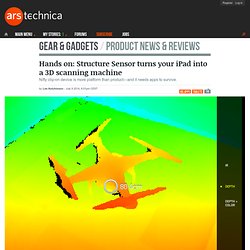 The company is nearly done shipping the $399 devices to its crowdfunding backers (non-backers who buy one now can expect delivery in about a month), but we managed to finagle a couple of days with an early production version of the Structure Sensor to get a peek at how it performs in the real world. We learned a lot about what the Structure Sensor is—and we learned even more about what it isn’t. We received a pair of boxes from Occipital: one contained the Structure Sensor and its dedicated Lightning cable, and the other contained the bracket necessary to attach the Structure to our iPad mini (the Structure works with any iPad with a Lightning connector, but you need the correct bracket to mount it). More design hobbyists, entrepreneurs use 3D printing. Matt Sullivan, a retired soldier, still has trouble explaining his right leg to strangers. 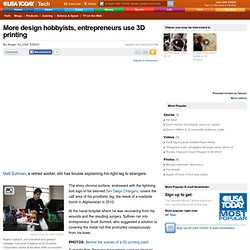 The shiny chrome surface, embossed with the lightning bolt logo of his beloved San Diego Chargers, covers the calf area of his prosthetic leg, the result of a roadside bomb in Afghanistan in 2010. At the naval hospital where he was recovering from his wounds and the resulting surgery, Sullivan ran into entrepreneur Scott Summit, who suggested a solution to covering the metal rod that protruded conspicuously from his knee. PHOTOS: Behind the scenes of a 3D printing plant. The fast, easy to build, affordable 3D printer - 3D printing for everyone! DUS Architects Amsterdam - DUS architects was founded by Msc Arch. 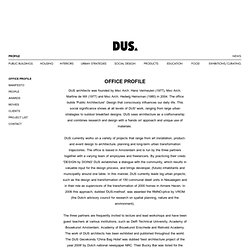 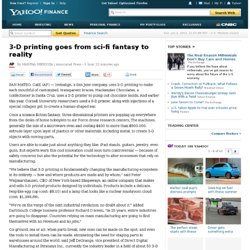 Additive Manufacturing, 3D Printing, and the Coming Stock Market Boom: Dr Alexander Elder: Amazon.com. 15 3D-printed gifts you could make at home for free. The holidays tend to sneak up on most of us, which is interesting given the proliferation of holiday-themed stuff that surrounds us this time of year. They most noticeably sneak up on our bank accounts, as we scramble to get everyone from our boss to our brother the perfect gift. This year, though, why not take advantage of the whole DIY craze that's taking our country by storm?

Instead of buying a gift, just print one. Heck, if that's not what 3D printers are for, then I've haven't the slightest idea why we've got them. MAKE magazine.