Sorry, Hair Club—We Can Finally 3D-Print Hair. MIT invents 'breakthrough' 3D printer that can print 10 different materials simultaneously. Researchers from MIT's Computer Science and Artificial Intelligence Laboratory (CSAIL) have made a breakthrough in the field of 3D printing, developing a 3D printer prototype that is able to print up to 10 different materials simultaneously onto a single object. 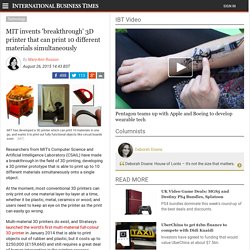 At the moment, most conventional 3D printers can only print out one material layer-by-layer at a time, whether it be plastic, metal, ceramics or wood, and users need to keep an eye on the printer as the print can easily go wrong. This mind blowing new 3D printing technique is inspired by Terminator 2​ The Continuous Liquid Interface Production (CLIP) technology is shown at 7x speed. 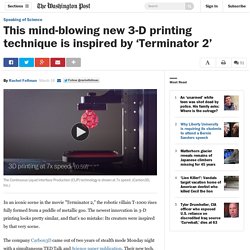 (Carbon3D, Inc.) In an iconic scene in the movie "Terminator 2," the robotic villain T-1000 rises fully formed from a puddle of metallic goo. The newest innovation in 3-D printing looks pretty similar, and that's no mistake: Its creators were inspired by that very scene. The company Carbon3D came out of two years of stealth mode Monday night with a simultaneous TED Talk and Science paper publication. Their new tech, which they say could be used in industrial applications within the next year, makes coveted 3-D printers the likes of those sold by MakerBot look like child's play. 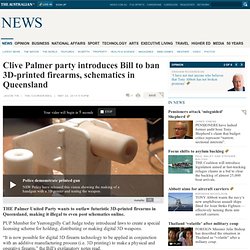 End GFC barriers: BHP chief ANNABEL HEPWORTH THE head of BHP is urging G20 leaders to roll back protectionist trade barriers imposed after the financial crisis of 2008 to help boost trade. China could hold ‘25pc of world shares’ David Uren THE world should brace for an avalanche of Chinese investment that could leave it holding a quarter of the world’s shares, the Treasury chief says. 3D printer by Sask. man gets record crowdsourced cash - Saskatchewan.

A Saskatchewan man who has developed an affordable 3D printer has attracted worldwide attention and more than $700,000 in crowdsourced funding. 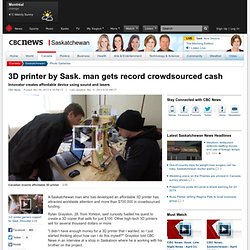 Rylan Grayston, 28, from Yorkton, said curiosity fuelled his quest to create a 3D copier that sells for just $100. Paul McCarthy, Massachusetts man, uses 3-D printer to make prosthetic hand for his son. 3D-printed toothbrush ‘perfectly’ cleans your teeth in just six seconds. No, it isn’t the misshapen genitalia of the eponymous creature from the Alien movies: It’s a 3D-printed toothbrush that promises to give you “perfectly clean teeth” in just six seconds, with optimum plaque removal and protection of gums. 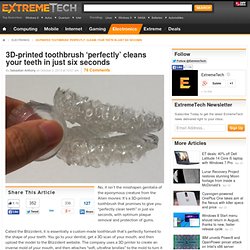 Called the Blizzident, it is essentially a custom-made toothbrush that’s perfectly formed to the shape of your teeth. You go to your dentist, get a 3D scan of your mouth, and then upload the model to the Blizzident website. RepRap. The Next Industrial Revolution Starts in this 20-foot Shipping Container. The Future of Design. NASA develops 3D printing factory in space. News: NASA is developing an orbiting factory that will use 3D printing and robots to fabricate giant structures such as antennas and solar arrays of up to a kilometre in length, as part of its ongoing search for extra-terrestrial life. 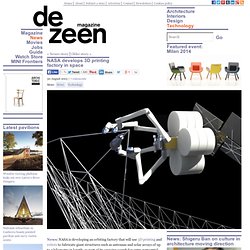 The US space agency this week announced it was awarding technology firm Tethers Unlimited Inc (TUI) a $500,000 contract to develop the facility. The NASA funding - a second-phase contract that follows an initial contract issued earlier this year - will allow TUI to continue work on its SpiderFab technology, which allows large-scale spacecraft components to be built in space, avoiding the expense of building the components on earth and transporting them into space using rockets. “On-orbit fabrication allows the material for these critical components to be launched in a very compact and durable form, such as spools of fiber or blocks of polymer, so they can fit into a smaller, less expensive launch vehicle.” Said TUI CEO and chief scientist Dr Rob Hoyt. CORTEX - JAKE EVILL. 3-D Printer Brings Dexterity To Children With No Fingers : Shots - Health News. 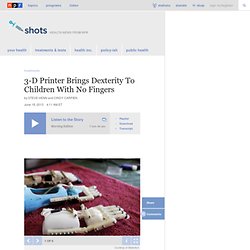 New parts can be easily "printed" as the child grows. Courtesy of Makerbot Hide caption Ivan Owen, a special effects artist in Bellingham, Wash., creates large mechanical hands. He is also one of the creators of the Robohand. Cindy Carpien/NPR Hide caption Richard Van As, a South African carpenter who lost a portion of his hand in an accident, assembles a Robohand and fits it to Liam Dippenaar.

Liam was born without fingers on his right hand. Hide caption The newest version of the Robohand is made of snap-together parts. Richard Van As was working in his home near Johannesburg, South Africa, in May of 2011, when he lost control of his table saw. 3D printed meat could soon be cheap and tasty enough to win you over. The next time you’re about to bite into a hamburger, take a moment to consider the resources that went into making it. 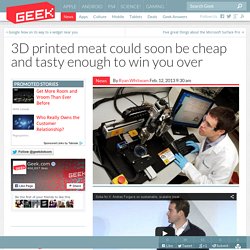 Company develops new fiber-reinforced wood, concrete ink for 3D printing. Even though 3D printing is an emerging market and technology, aside from Defense Distributed’s gun, it seems like it has hit a plateau. 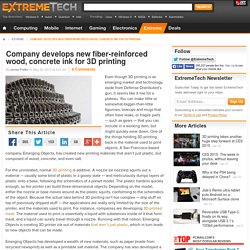 You can make little or somewhat-bigger-than-little figurines, teacups and mugs that often have leaks, or fragile parts — such as gears — that you can include in a working item, but might quickly wear down. One of the things holding 3D printing back is the material used to print objects. Peter Thiel Backs Start-up Making 3D Printed Meat  - US Business News. Modern Meadow, based in Columbia, Missouri, will receive the $350,000 grant to continue developing new meat and leather production technologies. 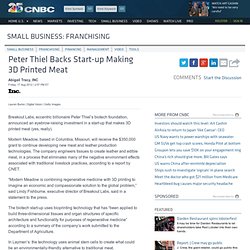 The company engineers tissues to create leather and edible meat, in a process that eliminates many of the negative environment effects associated with traditional livestock practices, according to a report by CNET. “Modern Meadow is combining regenerative medicine with 3D printing to imagine an economic and compassionate solution to the global problem,” said Lindy Fishburne, executive director of Breakout Labs, said in a statement to the press.

The biotech start-up uses bioprinting technology that has “been applied to build three-dimensional tissues and organ structures of specific architecture and functionality for purposes of regenerative medicine” according to a summary of the company’s work submitted to the Department of Agriculture. The additional two grants were awarded to Bell Biosystems and Entopsis. Turn Your Plastic Recyclables Into 3D Printing Spools With Filabot. Source: Filabot 3D printers are getting cooler every day, but there’s one component integral to 3D printing that normally gets overlooked – that is, until you have to pay for it. As many 3D hobbyists have no doubt discovered, the one time cost of the printer can be quickly dwarfed by feeding it spool after spool of raw plastic.

At $40 or more per spool, an avid hobbyist can see his or her enthusiasm rapidly diminished. Maybe Filabot won’t revolutionize how 3D printing is done, but how often it is done. Filabot is a 3D plastic extrusion system that takes all kinds of recyclable plastic – milk jugs, soda, detergent and shampoo bottles – and turns them into raw material for 3D printing creativity. Not only will your household recyclables now appear as treasure troves of cheap and virtually endless supply of 3D printing plastic, all those projects that didn’t print right, cracked, or just didn’t turn out the way you thought it would can now be given a second chance at greatness.