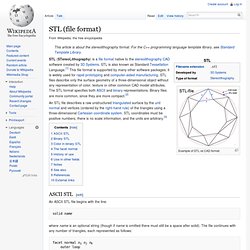 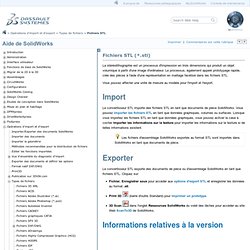 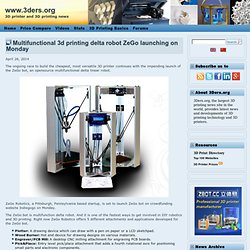 ZeGo Robotics, a Pittsburgh, Pennsylvania based startup, is set to launch ZeGo bot on crowdfunding website Indiegogo on Monday. The ZeGo bot is multifunction delta robot. And it is one of the fastest ways to get involved in DIY robotics and 3D printing. Right now ZeGo Robotics offers 5 different attachments and applications developed for the ZeGo bot. Plotter: A drawing device which can draw with a pen on paper or a LCD sketchpad. The combination of the PCB mill and the pick and place machine allows you to do the electronic prototyping in house. The ZeGo bot was based on Rostock opensource design and co-developed with Billy Zelsnack. Legacy Filament Extruder soon on Kickstarter, turning old plastic into 3D printer ‘ink’ April 21, 2014 Liz Havlin, a Seattle-based entrepreneur, is working on an Open Source project that turns recycled plastic into 3D printer ink. 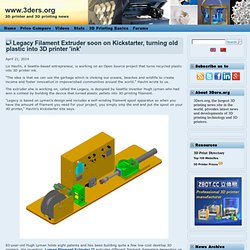 "The idea is that we can use the garbage which is choking our oceans, beaches and wildlife to create income and foster innovation in impoverished communities around the world. " Havlin wrote to us. The extruder she is working on, called the Legacy, is designed by Seattle inventor Hugh Lyman who had won a contest by building the device that turned plastic pellets into 3D printing filament. "Legacy is based on Lyman's design and includes a self-winding filament spool apparatus so when you have the amount of filament you need for your project, you simply snip the end and put the spool on your 3D printer," Havlin's Kickstarter site says. 83-year-old Hugh Lyman holds eight patents and has been building quite a few low-cost desktop 3D printers.

The key point here is that you could theoretically build such an extruder from parts that cost $250. InShare1. 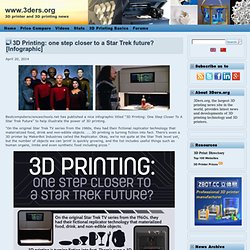 "On the original Star Trek TV series from the 1960s, they had their fictional replicator technology that materialized food, drink and non-edible objects. ... 3D printing is turning fiction into fact. There's even a 3D printer by MakerBot Industries called the Replicator. Okay, we're not quite at the Star Trek level yet, but the number of objects we can 'print' is quickly growing, and the list includes useful things such as human organs, limbs and even synthetic food including pizza. 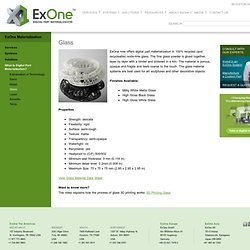 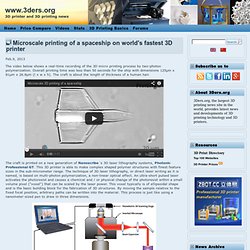 Overall printing time was less than 50 seconds for the ship with dimensions 125µm x 81µm x 26.8µm (l x w x h). The craft is about the length of thickness of a human hair. The craft is printed on a new generation of Nanoscribe´s 3D laser lithography systems, Photonic Professional GT. This 3D printer is able to make complex shaped polymer structures with finest feature sizes in the sub-micrometer range. Researchers start with the CAD model of the ship, based a Hellcat spaceship from Wing Commander Saga and then use Photonic Professional GT 3D printer to print a polymer model on the microscale.