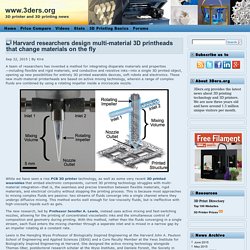 These new multi-material printerheads are based on active mixing technology, wherein a range of complex fluids are combined by using a rotating impeller inside a microscale nozzle. While we have seen a rise PCB 3D printer technology, as well as some very recent 3D printed wearables that embed electronic components, current 3D printing technology struggles with multi-material integration—that is, the seamless and precise transition between flexible materials, rigid materials, and electrical circuitry without stopping the printing process. The new research, led by Professor Jennifer A. Prof. A Sub-$4,000 Metal 3D Printer? This Band Of Small Robots Could Build Entire Skyscrapers Without Human Help. Even though most buildings are designed using the latest digital tools, actual construction is stuck in the past; building is messy, slow, and inefficient. 3-D printing might change that, but recent projects like these printed houses in China demonstrate one of the technical challenges--the equipment itself has to be gigantic, because it can’t work unless it’s bigger than the building itself. 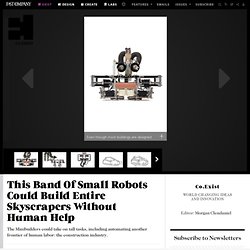 A team of researchers from Institute for Advanced Architecture of Catalonia are working on another solution: A swarm of tiny robots that could cover the construction site of the future, quickly and cheaply building greener buildings of any size. The robots work in teams to squirt out material that hardens into the shell of the building. Foundation robots move in a track, building up the first 20 layers of the structure, and then a series of "grip" robots clamp on the top or sides adding more layers, ceilings, and frames for windows or doors. The Minibuilders could in theory build anything. 3DPrintGirl: 3D Systems & Coke team ... 3D Printed Metal Goes Big at RAPID 2014. Buy a €12,000 3D House Printer, Print a House. 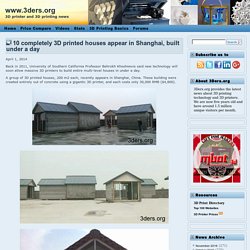 Futuristic EDAG Genesis 3D printed car world premiere at 2014 Geneva motor show. Mar.4, 2014 Is it possible to produce a component, module, or even a complete, one-piece vehicle body in one single production process? 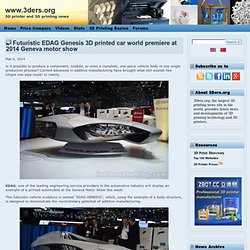 Current advances in additive manufacturing have brought what still sounds like Utopia one step closer to reality. EDAG, one of the leading engineering service providers in the automotive industry will display an example of a printed automobile at the Geneva Motor Show this week. This futuristic vehicle sculpture is named "EDAG GENESIS", which, using the example of a body structure, is designed to demonstrate the revolutionary potential of additive manufacturing. Created by the EDAG Competence Centre for Lightweight Construction, "EDAG GENESIS" is based on the bionic patterns of a turtle, which has a shell that provides protection and cushioning and is part of the animal's bony structure. Images: indianantosblog.com Future or Utopia? The next step: 3D printing the human body. Intricate 3D Printed Materials Lighter Than Water And As Strong as Steel. Using precision lasers, a Nanoscribe 3D printer can print models of the Empire State building in a space the width of a human hair. 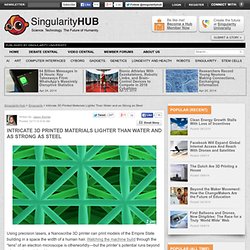 Watching the machine build through the “lens” of an electron microscope is otherworldly—but the printer’s potential runs beyond microscale model making. Triangular micro-truss structure about 30 millionths of a meter wide. Researchers at the Karlsruhe Institute of Technology, led by Jens Bauer, believe such 3D printers may help craft a new generation of materials lighter than water and strong as steel. Today, the sturdiest materials tend to be the densest (like metals), and the least dense materials tend to be the weakest (like foams). Ideally, materials are both lightweight and strong. As it turns out, some of the strongest, least dense materials aren’t manmade at all—they’re naturally occurring. CNN's The Next List: Neri Oxman's experiment with 3D printing buildings. Jan.12, 2013 Is it possible to 3D print buildings? 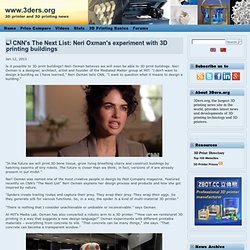 Neri Oxman believes we will soon be able to 3D print buildings. Will 3D Printing Change Everything? World’s First Carbon Fiber 3D Printer Announced, The Mark One. This is the week of the SolidWorks World 2014 in San Diego, Ca, and so far there have been quite a few pretty groundbreaking announcements from the convention. 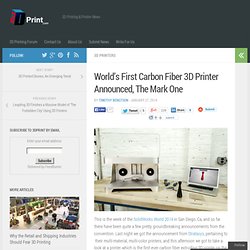 Last night we got the announcement from Stratasys, pertaining to their multi-material, multi-color printers, and this afternoon we got to take a look at a printer which is the first ever carbon fiber extruding 3D printer on the market. It’s called the “Mark One,” and is manufactured by MarkForged. The 3D printer that can build a house in 24 hours. Getty The University of Southern California is testing a giant 3D printer that could be used to build a whole house in under 24 hours. 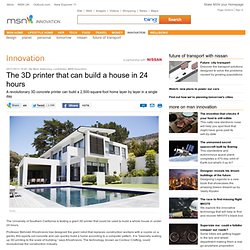 Professor Behrokh Khoshnevis has designed the giant robot that replaces construction workers with a nozzle on a gantry, this squirts out concrete and can quickly build a home according to a computer pattern. It is “basically scaling up 3D printing to the scale of building,” says Khoshnevis. Delicate Eye Cells Are Latest to Be 3D-Printed. Blindness might just be the first major disability to disappear, at least if our high-tech future takes more a utopian than dystopian bent. 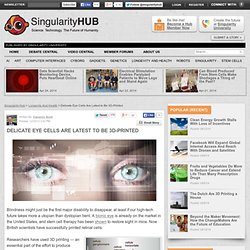 A bionic eye is already on the market in the United States, and stem cell therapy has been shown to restore sight in mice. Now British scientists have successfully printed retinal cells. Retinal ganglion at left, towards the front of the eye Researchers have used 3D printing — an essential part of the effort to produce viable tissue and organs to replace what is damaged — with body cells before, but the process is more successful with some types of cells than others. Google's New Smartphone Will Be 3D Printed by 3D Systems. Google’s Modular Phone Gets 3D Printed In May 2012, Google acquired Motorola Mobility for $12.5 billion, marking a transition for Google from search engine to consumer electronics manufacturer. 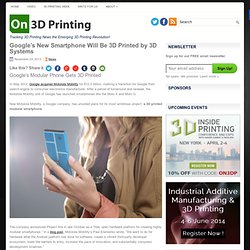 After a period of turnaround and renewal, the Motorola Mobility unit of Google has launched smartphones like the Moto X and Moto G. Now Motorola Mobility, a Google company, has unveiled plans for its most ambitious project: a 3D printed modular smartphone. The company announced Project Ara in late October as a “free, open hardware platform for creating highly modular smartphones.” 3D printing with graphene is coming, and it will change the world. Oct.19, 2013 Graphene is going to revolutionize the 21st Century.

As a emerging material Graphene could change the way electronic components are made. Graphene is a two dimensional material consisting of a single layer of carbon atoms arranged in a honeycomb or chicken wire structure. It is the thinnest material known and according to mechanical engineering professor James Hone, of Columbia University, graphene is strongest material ever measured, some 200 times stronger than structural steel. Graphene conducts electricity as efficiently as copper and outperforms all other materials as a conductor of heat. Mining and technology development company American Graphite Technologies announced in April that it will research the properties of graphene contained matter as working material for 3D printing.

Graphene 3D Printing. Since its discovery in 2004 by a pair of scientists at the University of Manchester, England, graphene has been sitting around the lab waiting for applications like a genie in a bottle waiting for someone to make some wishes. That genie will soon be very, very busy fulfilling the latest wish being asked of it—“Make me whatever I want, whenever I want it, and delivery it wherever I want in the world.” And the genie made of graphene says, “Your wish is my command.” American Graphite Technologies Inc. (OTCBB:AGIN) just announced its letter of intent to partner with three Ukraine-based research facilities—the National Academy of Science of Ukraine, the Ukraine National Science Centre, and the Kharkiv Institute of Physics and Technology ("KIPT")—to develop a 3D printing technology using the wonder substance graphene as the crafting material.

The 3D printers they produce will mean nothing less than the mass production of genies. Anthony Atala: Growing new organs. Will 3D Printing Change the World? Nanoscale 3D Printer Now Commercially Available. iRobot files patent application for autonomous all-in-one 3D printing, milling, drilling and finishing robot. Robotic Fabricator (credit: iRobot) Well, just when you thought 3D printing was finally putting you back in charge of creating your own stuff, along comes iRobot Corporation with a U.S. patent application for a “Robotic Fabricator.” It’s conceived as a completely autonomous all-in-one product fabrication robot that handles manufacturing (including 3D printing) and all the post-printing work, from seed component to mature product, reports .