Links on 3D printing topics, reprap, makerbots, zcorp, and on and on 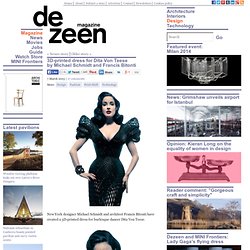 Images above and top by Albert Sanchez. Designed by Schmidt and generated by Bitonti, the floor-length nylon gown was made using selective laser sintering (SLS), where material is built up in layers from plastic powder fused together with a laser. The rigid plastic components are fully articulated to create a netted structure that allows for movement. Spirals based on the Golden Ratio were applied to a computer rendering of Von Teese's body so the garment fits her exactly.

Draped over a nude silk corset, the black-lacquered dress is cinched in at the waist and exaggerated at the shoulders, and embellished with 12,000 Swarovski crystals. Other 3D-printed fashion we've featured includes Iris van Herpen's outfits shown at Paris Fashion Week. Photos are by Jeff Meltz unless otherwise stated. 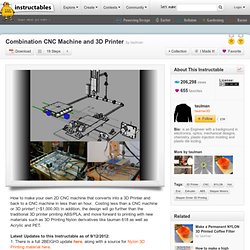 Costing less than a CNC machine or 3D printer! (~$1,000.00) In addition, the design will go further than the traditional 3D printer printing ABS/PLA, and move forward to printing with new materials such as 3D Printing Nylon derivatives like tauman 618 as well as Acrylic and PET. Latest Updates to this Instructable as of 9/12/2012: 1. There is a full 2BEIGH3 update here, along with a source for Nylon 3D Printing material here. 2. Sculpture through Rapid Prototyping. The Effect of University Monopoly Licensing in 3d Printing. Inkjet powder 3d printers provide a useful case study for the effects of university exclusive patent licensing. 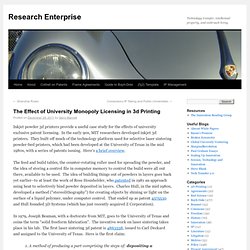 In the early 90s, MIT researchers developed inkjet 3d printers. They built off much of the technology platform used for selective laser sintering powder-bed printers, which had been developed at the University of Texas in the mid 1980s, with a series of patents issuing. Here’s a brief overview. The feed and build tables, the counter-rotating roller used for spreading the powder, and the idea of storing a control file in computer memory to control the build were all out there, available to be used.

The idea of building things out of powders in layers goes back yet earlier–to at least the work of Ross Housholder, who patented in 1981 an approach using heat to selectively bind powder deposited in layers. In 1979, Joseph Beaman, with a doctorate from MIT, goes to the University of Texas and coins the term “solid freeform fabrication”. 1. This is pretty basic. 1. 1. 2. 3. 4. Scorching the 3dp Earth.

This is an important time in the development of 3d printing. 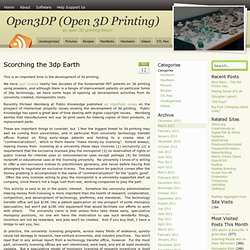 We have just cleared nearly two decades of the fundamental MIT patents on 3d printing using powders, and although there is a tangle of improvement patents on particular forms of 3dp technology, we have some hope of opening up development activities from its university-created, monopolistic roots. Recently Michael Weinberg at Public Knowledge published an important essay on the prospect of intellectual property issues slowing the development of 3d printing.

Public Knowledge has spent a great deal of time dealing with digital copyright issues. Weinberg worries that manufacturers will sue 3d print users for making copies of their products, or replacement parts. This activity is said to be in the public interest. In practice, the university licensing programs, across many fields of endeavor, quietly cause net damage to research, new venture economies, and industry practices. Thingiverse - Digital Designs for Physical Objects. Calibration. This page has been flagged as containing duplicate material that RepRapSoftwareTweakingManual also attempts to cover.These pages should be merged such that both pages do not attempt to cover the duplicate topics. 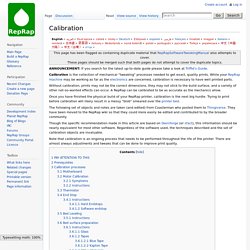 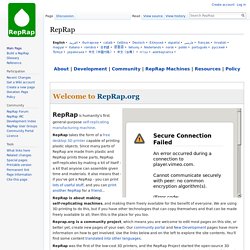 RepRap takes the form of a free desktop 3D printer capable of printing plastic objects. Since many parts of RepRap are made from plastic and RepRap prints those parts, RepRap self-replicates by making a kit of itself - a kit that anyone can assemble given time and materials.