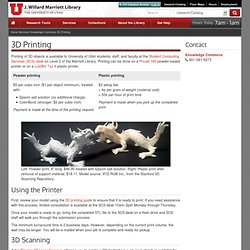 Printing can be done on a ProJet 160 powder-based printer or on a LulzBot Taz 4 plastic printer. Using the Printer. Discov3ry Extruder Add-on – 3D Print in Sugar, Silicon, Ceramic & More For Under $350. There are many materials that FDM 3D printers are able to print with.

However, there are many more materials that don’t print on the majority of 3D Printers, due to their physical properties. However, one company, by the name of Structur3D Printing, hopes to change this. They plan on doing this by launching a new product called the Discov3ry. It is an extruder add-on that allows most FDM 3D printers, including MakerBots, Ultimakers, RepRaps and other DIY printers to print in a multitude of previously unthought of materials. It should work with any stepper motor based desktop 3D printer system. 3D Printing Request - 3D printing - LibGuides at Oregon State University. What kind of printer does the library use? 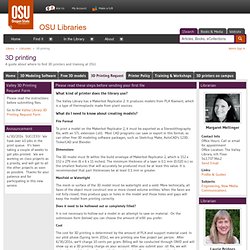 Making Math 3D - Getting Smart by Megan Mead - 3D printing, edchat, EdTech, mathchat, Mathematics. It is officially Mathematics Awareness Month, the perfect time to highlight what is making math more accessible and more real for students. 3D printers are definitely evolving into a essential tool for mastering mathematics in the 21st Century. 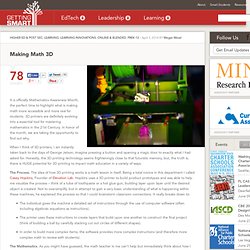 In honor of the month, we are taking the opportunity to find out why. When I think of 3D printers, I am instantly taken back to the days of George Jetson, imagine pressing a button and opening a magic door to exactly what I had asked for. Honestly, the 3D printing technology seems frighteningly close to that futuristic memory, but, the truth is, there is HUGE potential for 3D printing to impact math education in a variety of ways. The Process. The idea of how 3D printing works is a math lesson in itself. Design Thinking Workshop for Kids. How to 3D print what you build in Minecraft … TUTORIAL WITH VIDEO! Of all the 3D design apps I plan to blog about, Printcraft is easily the most exciting: it is the ONE design tool I *KNOW* a majority of my students can use immediately and masterfully. 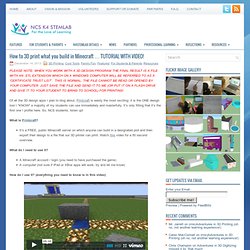 It’s only fitting that it’s the first one I profile here. So, NCS students, listen up! What is Printcraft? It’s a FREE, public Minecraft server on which anyone can build in a designated plot and then export their design to a file that our 3D printer can print. 3D Printing Andy Warhol. Andy Warhol’s Signature, 2014Josh Ajima (American, Born 1972)3D Printed in PLA Plastic Campbell’s, 1985 by Andy Warhol found at was used as a visual reference for this piece.Campbell’s, 1985Andy Warhol (American, 1928-1987) Digital image, from disk 1998.3.2129.3.22 The Andy Warhol Museum, Pittsburgh; Founding Collection, Contribution The Andy Warhol Foundation for the Visual Arts, Inc. © 2014 The Andy Warhol Foundation for the Visual Arts, Inc. / Artists Rights Society (ARS), New York A news article announces the discovery of lost works by Andy Warhol. 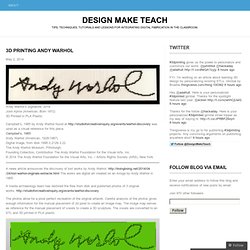 The works are digital art created on an Amiga by Andy Warhol in 1985. A media archaeology team has restored the files from disk and published photos of 3 original works. The photos allow for a pixel perfect recreation of the original artwork. 3-D scanning, with your smartphone. Traditionally, 3-D scanning has required expensive laser scanner equipment, complicated software, and technological expertise. 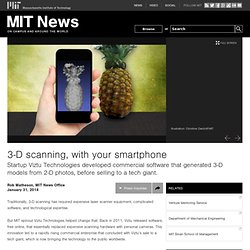 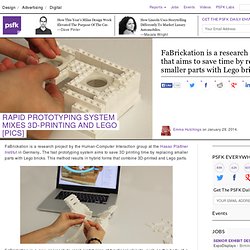 The fast prototyping system aims to save 3D printing time by replacing smaller parts with Lego bricks. This method results in hybrid forms that combine 3D-printed and Lego parts. 2D Design to 3D Print Creator. Use grayscale to define detail thickness: If checked, the image uses black as the maximum thickness for the object (as defined by slider), and the various shades of grey as a lesser percentage of max thickness. 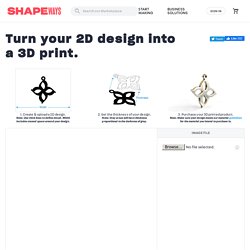 Definition: White: Not used to generate your design.Gray: Variable thickness as a percentage lesser than maximum.Black: Maximum of defined thickness. Use grayscale to define detail thickness: If checked, the image uses black as the maximum thickness for the object (as defined by slider), and the various shades of grey as a lesser percentage of max thickness. Definition: Tips, techniques, tutorials and lessons for integrating digital fabrication in the classroom. Chocolate Printing. DIY Filament Extruder. Step #1: Check or make your parts If you bought a kit, check the Bill of Materials to make sure all the necessary parts are provided, and contact Filabot if anything’s missing. Scratch builders, you’ve got some wood- and metalworking in your future. To get started, click on the above parts drawings.Using a laser cutter or a fine woodworking saw, cut the enclosure’s top control panel and back wall from the 6mm plywood.

What Is 4-D Printing? [Video] The biggest breakthroughs in how we make things lie not in the technology to manipulate materials but in the materials themselves. 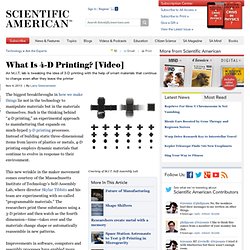 Such is the thinking behind “4-D printing,” an experimental approach to manufacturing that expands on much-hyped 3-D printing processes. Instead of building static three-dimensional items from layers of plastics or metals, 4-D printing employs dynamic materials that continue to evolve in response to their environment. Make Sense of 3D Objects. Today 3D Systems announced their latest product, the Sense 3D Scanner. Keith Ozar from 3D Systems described the new hand-held 3D scanner as “physical photography.”

The Sense can easily scan objects as large as 10′x 10′x 10′ or high resolution scans as close as 20″ away. Best of all the entire system costs $399 and will be in hundreds of Staples stores starting on November 18, 2013. Check out how the Sense scanned Matt Richardson: David Scheltema. 3D printing: A third-world dimension. African Jumpstart With 3D Printing? - Fabbaloo - Many years ago we wondered how Africa could ever catch up to the West in telecommunications. The cost of installing cabling would have been tremendous, but something happened to change the picture.

Wireless technology emerged and Africa didn't have to come up with cash to install wires. 3D Printing Umbilical Cord Clamps in Haiti. At first glance, Haiti might seem an odd destination for a 3D printer. 3D printers are cutting edge. They’re in the news. They’re printing amazing things, from custom prosthetics, to fully functional engines, to buildings. They print forms that would be impossible to manufacturable otherwise.

And they’re a fairly accessible toy for the DIYer to use at home. Haiti is a beautiful country fighting to improve itself and its global standing. Our organization, iLab // Haiti has brought the first two 3D printers to the country of Haiti. We are using two of MakerBot’s dual extrusion Replicator 1′s, and we will add two more at the end of this month. 10 Ways 3D Printing Can Be Used In Education... FingerReaderRing-like wearable device that can read aloud text as you guide it with your finger - video embedded below:The FingerReader is a wearable device that...