How to Get More Followers on Twitter (with Cheat Sheet) Three Methods:Becoming Follow-WorthyIncreasing Your VisibilityIncreasing Your Followers StrategicallyCommunity Q&A Silicon Valley venture capitalist Guy Kawasaki said, "Truth be told, there are only two kinds of Twitter users: those that want more followers and those that lie. 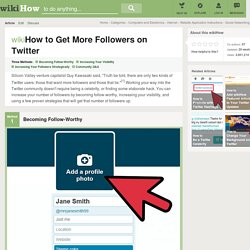 "[1] Working your way into the Twitter community doesn't require being a celebrity, or finding some elaborate hack. You can increase your number of followers by becoming follow-worthy, increasing your visibility, and using a few proven strategies that will get that number of followers up. Steps Becoming Follow-Worthy <img alt="Image titled Get More Followers on Twitter Step 1" src=" width="728" height="546" class="whcdn" onload="WH.performance.clearMarks('image1_rendered'); WH.performance.mark('image1_rendered');">1Work on your profile.

9 Scientifically Proven Ways to Build Followers on Twitter. There have been a few academic studies of social media in the past few years, but all of them were "snapshots"--one-time views of people's social media status, not long-term studies that test what works over time. 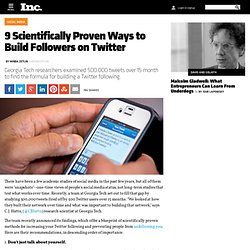 Recently, a team at Georgia Tech set out to fill that gap by studying 500,000 tweets fired off by 500 Twitter users over 15 months. "We looked at how they built their network over time and what was important to building that network," says C.J. Hutto, (@CJHutto) research scientist at Georgia Tech. The team recently announced its findings, which offer a blueprint of scientifically proven methods for increasing your Twitter following and preventing people from unfollowing you.

Here are their recommendations, in descending order of importance: 1. Non-tweeters often disparage Twitter by saying they're not interested in what others had for breakfast. 2. 3. 4. 5. 6. "They're a good way to put what you're saying into context," Hutto says. 7. 8. 9. How To Dramatically Increase Your Twitter Following.

Linkedin. Sign Up. Events in South Africa. Events Calendar 2014. South Africa: news and events. News and events The Springbok Women departed for the IRB Women's Rugby World Cup in France on Sunday with high hopes of achieving their best ever finish in the tournament following months of preparation and specialist skills training. 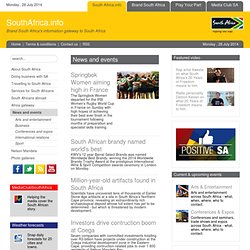 KWV's 12 year Barrel Select Brandy was named Worldwide Best Brandy, winning the 2014 Worldwide Brandy Trophy Award at the prestigious International Wine & Spirit Competition awards ceremony in London on Monday. Scientists have uncovered tens of thousands of Earlier Stone Age artifacts at a site in South Africa's Northern Cape province, revealing an extraordinarily rich archaeological deposit whose full extent has yet to be determined - but which is threatened by modern development. 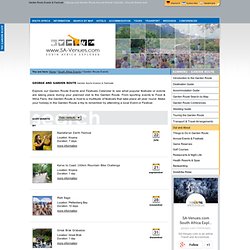 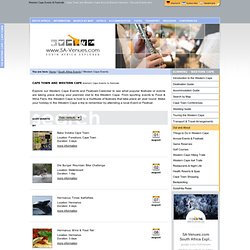 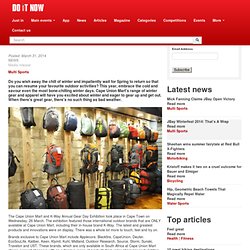 The exhibition featured those international outdoor brands that are ONLY available at Cape Union Mart, including their in-house brand K-Way. The latest and greatest products and innovations were on display. There was a whole lot more to touch, feel and try on. Brands exclusive to Cape Union Mart include Applecore, Blackfire, CapeUnion, Deuter, EcoSouLife, Kaliber, Keen, Klymit, Kuhl, Midland, Outdoor Research, Source, Storm, Sunski, Travelon and UST. These brands, which are only available in South Africa at Cape Union Mart stores, present shoppers with an extensive range of products from razor-sharp knives to lighting, backpacks, sleeping bags and hydration systems as well as footwear, two-way radios, computer accessories, technical apparel and clothing. Pride of place at the exhibition went to Cape Union Mart's in-house brand, K-Way.