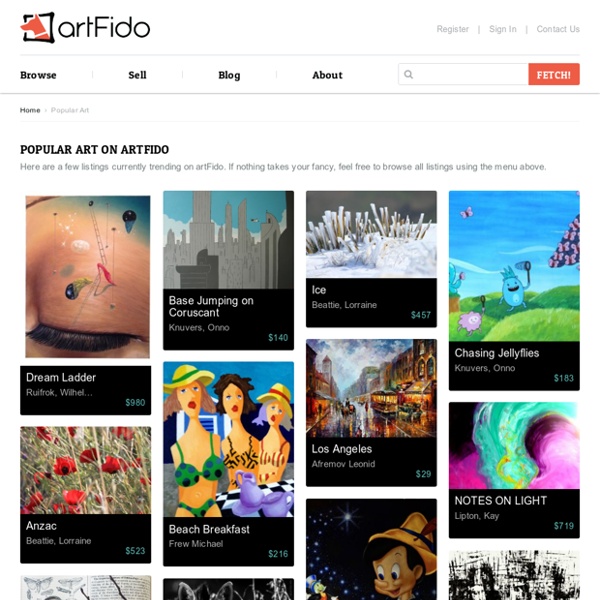 You Won't Believe How Many People Buy Art via Mobile Apps From Cory: Freddy Grant at Bluethumb gallery caught my eye when they reached out to let me know about the study from TEFAF that mentioned that only 6% of all fine art sales happen online – but that number was up nearly double the year before. I asked them to write an article about their experience as an online-only gallery, and to highlight the fact that more than 20% of their sales come from smartphone orders. The way people buy art is changing. TEFAF’s annual Art Market Report shows that we now trust e-commerce to make bigger purchases. Globally, online art sales have increased from €2.5bn to €3.3bn in the last year growing their total share of the market by 1%, with the majority of sales being made in the middle-market range of $1,000 – $50,000 (US). In the first quarter of 2015, Bluethumb, one of Australia’s leading original art sites and the company I work for, saw sales rise by 78% year-on-year.

6 advices from starchitects to the young architects Everyone that works in the field of architecture knows that it takes quite a high level of commitment and desire to become an architect. Nobody becomes an architect because they think it sounds cool or because they simply like to draw. There is a lot more to it and I think there has to be some cautions for you to even think you will experience any measurable success, yet nevertheless, some architects are successful and well known because of their designs. We thought it might be helpful if we can get some advice and guidance from them to young architects, so we began to dig the web searching for some valuable points of advices from senior and starchitects to the young and aspiring ones, check out some of them below. Do you have any advice for the young? Zaha Hadid: ” Focus, and work hard”“You have to be very focused and work very hard, but it is not about working hard without knowing what your aim is!

I Transform Myself Into Any Celebrity I Want I am a painter and makeup artist and a huge cinema, theater and music lover. I fussed my passion for portraits and makeup by developing an artistic project consisting of me turning myself into characters and celebrities, pushing the contouring techniques to the limit. I don’t use prosthetic appliances. It is so funny to create a character with your own possibilities! I buy old stuff like wigs and accessories at markets and study the characters watching photos, movies, videos.

2. Built-in Functions — Python 2.7.10 documentation Open a file, returning an object of the file type described in section File Objects. If the file cannot be opened, IOError is raised. When opening a file, it’s preferable to use open() instead of invoking the file constructor directly. The first two arguments are the same as for stdio‘s fopen(): name is the file name to be opened, and mode is a string indicating how the file is to be opened. The most commonly-used values of mode are 'r' for reading, 'w' for writing (truncating the file if it already exists), and 'a' for appending (which on some Unix systems means that all writes append to the end of the file regardless of the current seek position).

2. Built-in Functions Open a file, returning an object of the file type described in section File Objects. If the file cannot be opened, IOError is raised. When opening a file, it’s preferable to use open() instead of invoking the file constructor directly. The first two arguments are the same as for stdio‘s fopen(): name is the file name to be opened, and mode is a string indicating how the file is to be opened. Artistic Inclinations: MENA Platform Lets You Buy And Sell Fine Art Online Untitled by Fateh Moudarres, Oil On Canvas, 60 cm x 42 cm With annual art fairs like Art Dubai and Galleries Night, plus cultural districts such as Alserkal Avenue bringing in visitors to see regional and international artists and showings, there's evidently a great interest in MENA artists and artwork. It's an ideal time to start investing in hallmark works, but when we think of buying art, admit it, what comes to mind?

50 Outstanding Yet Free Photoshop Brush Packs For Your Designs Web designers commonly use Photoshop software for their every design because Photoshop make their work easy, provide them outstanding features and save their precious time too. This is the reason that every web designer is always ready to add new and fresh Photoshop tutorials and brushes sets in their toolbox. Once again, it is our pleasure to share with you another amazing collection of 50 fresh and free Photoshop brush packs. Have a look at these outstanding brushes sets and use them in your projects and make your projects more creative and eye-catching. You can also download all these Photoshop brush packs free of cost.