19 Reasons You Should Include Visual Content in Your Marketing [Data] 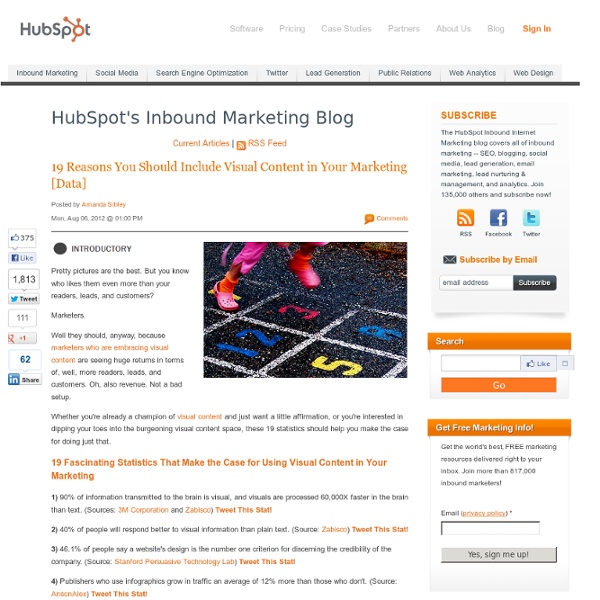 Pretty pictures are the best. But you know who likes them even more than your readers, leads, and customers? Marketers. Well they should, anyway, because marketers who are embracing visual content are seeing huge returns in terms of, well, more readers, leads, and customers. Whether you're already a champion of visual content and just want a little affirmation, or you're interested in dipping your toes into the burgeoning visual content space, these 19 statistics should help you make the case for doing just that. 1) 90% of information transmitted to the brain is visual, and visuals are processed 60,000X faster in the brain than text. 2) 40% of people will respond better to visual information than plain text. 3) 46.1% of people say a website's design is the number one criterion for discerning the credibility of the company. 4) Publishers who use infographics grow in traffic an average of 12% more than those who don't. 6) Visual content drives engagement. Related:  à mettre en ligne

Pressy - the Almighty Android Button! by Nimrod Back Touchscreens are amazing, but when you just want to turn on your flashlight, take a quick photo or send your location, simple actions can become a bit of a hassle. Wake your screen -> Unlock it -> Exit your current running app -> Search for the app you want to use -> Launch it -> And finally, perform your desired Action. This “simple” process requires 5-7 different Actions and takes more than 8 seconds! Additionally, you must maintain eye contact with your screen throughout the entire process. Don't believe us? But what if you want to perform an action quickly and without having to deal with or look at the device? Pressy lets you perform any Action on your smartphone by using the most intuitive input – clicking a button – Saving you time and effort! Connecting the Pressy Button with the free Pressy app lets you easily customize and use your favorite, everyday actions. Getting started using Pressy couldn’t be any easier. Quality assurance is very important to us. Pressy is in the News! 1.

-cri de coeur- Sarasota Website Design | Web Design Sarasota | Tampa Web Firm | Mark Fasel Design Pearltrees Radically Redesigns Its Online Curation Service To Reach A Wider Audience Pearltrees, the Paris-based online curation service that launched in late 2009, was always known for its rather quirky Flash-based interface that allowed you to organize web bookmarks, photos, text snippets and documents into a mindmap-like structure. For users who got that metaphor, it was a very powerful service, but its interface also presented a barrier to entry for new users. Today, the company is launching a radical redesign that does away with most of the old baggage of Pearltrees 1.0. Here is what Pearltrees 1.0 looked like: And here is the new version: Pearltrees’ mission is still to allow you to organize everything you want on the service (in that respect, it almost competes with Evernote). As Pearltrees CEO Patrice Lamothe stressed when I talked to him last week, all of the existing content the company’s over 2 million contributors have added in the past simply transfer over to the new site. 3. The new grid definitely does away with many of the problems of the early version.

7 Marketing Trends You Should Not Ignore Marketing has been democratised. The capability to use marketing tools and technology without having to beg or pay for attention is unprecedented. It’s a time where you can now build your own crowd to market and sell to without paying the mass media gate keepers. That’s social media. The social media networks are at your disposal and with the right tactics and software you can create brand awareness and access to influencers and decision makers in boardrooms across the world. This freedom to take control of your own marketing comes at a cost. It’s not just multiple networks and multimedia to think of, it is also about adapting to new hardware platforms where consumers receive their messaging. Within this technology and media explosion there are many marketing trends that have been emerging that we should be paying attention to. 7 Marketing Trends Here are seven trends that all marketers need to consider in their toolbox of tactics to remain effective and current. 1. 2. 3. 4. 5. 6. 7.

When is the social curation bubble going to burst? You just can’t move for social curation services right now. The biggest noise might be coming from Pinterest, which is growing like a weed — but whether it’s the new-look Delicious, Switzerland’s Paperli, shopping curation site Svpply, image service Mlkshk or another site, the fact is that almost everybody seems to want to help you save and sort and share the things you find on the web right now. With this swirl of activity, then, it’s no surprise to hear that Parisian service Pearltrees — slogan “collect, organize, discover” — has just raised another $6 million of funding, led by local conglomerate Groupe Accueil. The company, which has been running in public since 2009, welcomed the injection of funds as a way to help expand and scale up its system for bookmarking and organizing, which is based around a clustered visual interface. And it needs that scale. When I made the comparison between the two services, however, Pearltrees’ marketing chief François Rocaboy objected.