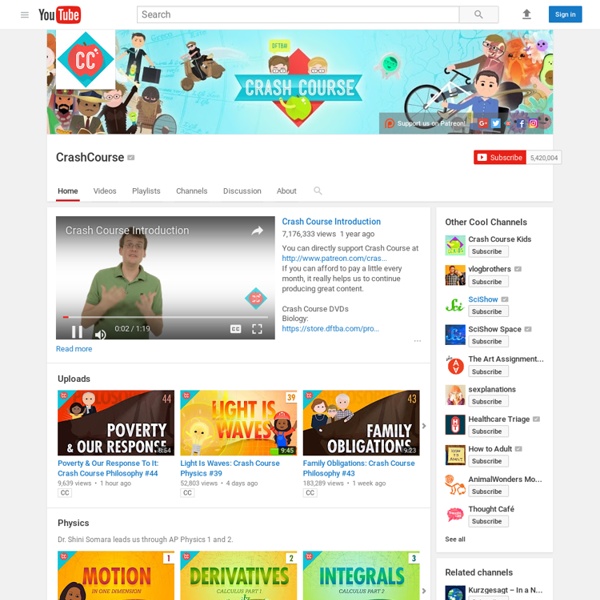 Sequences A sequence is a series of multiple posts on Less Wrong on the same topic, to coherently and fully explore a particular thesis. Reading the sequences is the most systematic way to approach the Less Wrong archives. If you'd like an abridged index of the sequences, try XiXiDu's guide, or Academian's guide targeted at people who already have a science background. 2012 March 12 - The Scale of the Universe Interactive Discover the cosmos! Each day a different image or photograph of our fascinating universe is featured, along with a brief explanation written by a professional astronomer. 2012 March 12 The Scale of the Universe - Interactive Flash Animation Credit & Copyright: Cary & Michael Huang Explanation: What does the universe look like on small scales? On large scales?

The Science Behind Foldit Foldit is a revolutionary new computer game enabling you to contribute to important scientific research. This page describes the science behind Foldit and how your playing can help. What is a protein? Proteins are the workhorses in every cell of every living thing. Your body is made up of trillions of cells, of all different kinds: muscle cells, brain cells, blood cells, and more. Inside those cells, proteins are allowing your body to do what it does: break down food to power your muscles, send signals through your brain that control the body, and transport nutrients through your blood.

Moonbase Alpha on Steam About This Game NASA has once again landed on the lunar surface with the goal of colonization, research, and further exploration. Shortly after the return to the Moon, NASA has established a small outpost on the south pole of the moon called Moonbase Alpha. Utilizing solar energy and regolith processing, the moonbase has become self-sufficient and plans for further expansion are underway. In Moonbase Alpha, you assume the exciting role of an astronaut working to further human expansion and research. Returning from a research expedition, you witness a meteorite impact that cripples the life support capability of the settlement.

Discover the world's most endangered species Wildscreen's Arkive project was launched in 2003 and grew to become the world's biggest encyclopaedia of life on Earth. With the help of over 7,000 of the world’s best wildlife filmmakers and photographers, conservationists and scientists, Arkive.org featured multi-media fact-files for more than 16,000 endangered species. Freely accessible to everyone, over half a million people every month, from over 200 countries, used Arkive to learn and discover the wonders of the natural world. Since 2013 Wildscreen was unable to raise sufficient funds from trusts, foundations, corporates and individual donors to support the year-round costs of keeping Arkive online. History of Newton's Papers (1727-1872) At his death on 20 March 1727,[1] Isaac Newton left papers relating to all areas of the intellectual pursuits he had followed since arriving at Trinity College, Cambridge, in the summer of 1661.[2] His friend, relative by marriage (to Newton's half-niece Catherine Barton) and successor at the Mint, John Conduitt, posted a bond for Newton's debts and claimed entitlement to this material, Newton having died intestate. As is evident from a number of manuscripts adorned with Conduitt's notes and corrections -- for example the manuscript of 'An historical account of two notable corruptions of Scripture in a Letter to a Friend' (now New College, Oxford, Ms. 361.4) -- he took a serious scholarly interest in the papers he had acquired, although this was also partly directed towards the possibility of their publication. Continue reading about the donation of Newton's scientific papers to Cambridge University in 1872

Extreme Weather 2011 A year for the record books From extreme drought, heat waves and floods to unprecedented tornado outbreaks, hurricanes, wildfires and winter storms, a record 14 weather and climate disasters in 2011 each caused $1 billion or more in damages — and most regrettably, loss of human lives and property. NOAA's National Weather Service has redoubled its efforts to create a "Weather-Ready Nation", where vulnerable communities are better prepared for extreme weather and other natural disasters. NOAA forecasts, advisories, watches, warnings and community-based preparedness programs have been and will continue play an even greater role in enhancing the economy and saving lives. A Weather-Ready Nation is one in which businesses, governments and the public are armed with accurate forecasts and other critical information on which to make smart decisions to protect life and property when severe weather threatens.

125 Great Science Videos: From Astronomy to Physics & Psychology Astronomy & Space Travel A Brief, Wondrous Tour of Earth (From Outer Space) - Video - Recorded from August to October, 2011 at the International Space Station, this HD footage offers a brilliant tour of our planet and stunning views of the aurora borealis.A Universe from Nothing - Video - In 53 minutes, theoretical physicist Lawrence Krauss answers some big enchilada questions, including how the universe came from nothing.A Year of the Moon in 2.5 Minutes - Video - The Lunar Reconnaissance Orbiter has been orbiting the moon for over a year. The footage gets compressed into 2 slick minutes.A Day on Earth (as Seen From Space) - Video - Astronaut Don Pettit trained his camera on planet Earth, took a photo once every 15 seconds, and then created a brilliant time-lapse film.Atlantis's Final Landing at Kennedy Space Center - Video - After more than 30 years, the space shuttle era comes to a close. Video runs 30 minutes. Physics Biology & Chemistry

Biomes of the World - Biome Map Click on a biome on the above graph for more information, informative videos, and links to scientist profiles, travel information, lesson plans and species profiles for each region. We'd like to know where you're coming from. If you've used this site for a class project or browsing for fun, add yourself to our map and communicate with other "ecogeeks"