Timeline. Cultural Institute. The upside of isolated civilizations - Jason Shipinski. Click here to learn more about the mystery of the Maya and their internal conflict. 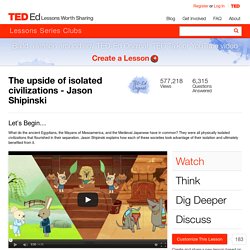 To take a little quiz about the Maya way of life, click here. More about The Kingdoms of Egypt. More about Ancient Egypt. Here's an article that compares Medieval Japanese and European Feudalism. Click here to learn more about Medieval Japanese warfare. Urbanization and the evolution of cities across 10,000 years - Vance Kite. Starting with those first small farming villages, people have flocked to cities in ever increasing numbers. 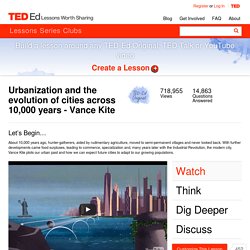 Urban environments offer the promise of a higher standard of living. Most of the great technological innovations that make our lives what they are came out of the exchange of ideas that result from so many people and ideas being concentrated in one area. This concentration of ideas facilitated rapid, global improvements in living standards which allowed the human population to grow at an unprecedented rate.

In 2011 the world population flew past 7 billion people. In recognition of this milestone, the National Geographic society produced a spectacular feature series on the global implications of 7 billion people. The Silk Road: Connecting the ancient world through trade - Shannon Harris Castelo. Globalization: The concept of interconnectedness through global world trade, often referred to as globalization, is a hot topic of debate today. 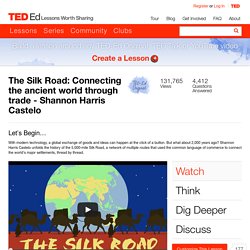 What are the results of modern world globalization on economy, culture, politics and the environment around the world? This website presents many of the pros and cons in the globalization debate today. Decide for yourself: Is globalization ultimately more harmful or beneficial for our society? Some suggested reading on the issues of globalization: Friedman, Thomas L. The World Is Flat: A Brief History of the Twenty-First Century. The pioneering cultures of the Silk Road overcome physical obstacles to create connections across varying geographies. Sometimes a single unlikely idea can have massive impact across the world. It may seem that we're living in a borderless world where ideas, goods and people flow freely from nation to nation.

Liu, Xinru. The past, present and future of the bubonic plague - Sharon N. DeWitte. The pharaoh that wouldn't be forgotten - Kate Narev. A female who is considered one of Egypt’s most forward thinking pharaohs? 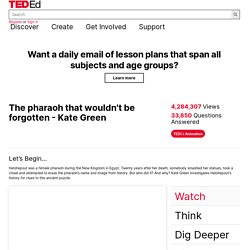 Hatshepsut was just that woman. Read here how Egypt grew and was at peace during her years of rule. Hatshepsut actually took on many of the duties similar to the king of Egypt during her reign. Read National Geographic’s story, The King Herself and discover more about her lineage, accomplishments, and struggles. Why might people believe there was an attempt to erase her from the history of Egypt? Was there a darker side to Hatshepsut that no one suspected? Hatshepsut left behind beautiful buildings and temples meant to represent her and her reign. A long search was made to find the remains of Hatshepsut. Catalogue of Digitized Medieval Manuscripts: About Us. Education BA in English, University of California, BerkeleyM.Phil and D.Phil, English Language and Literature, 1100-1500 University of Oxford, 2005 Interests I work on Old English, Middle English, Latin, and Anglo-Norman Literature, particularly lesser-known texts sitting at the blurry intersections of historiography, hagiography, and romance. 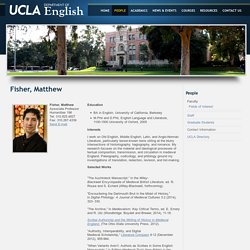 My research focuses on the material and ideological processes of textual composition, transmission, and circulation in medieval England. Paleography, codicology, and philology ground my investigations of translation, redaction, revision, and list-making. Selected Works “The Auchinleck Manuscript,” in the Wiley-Blackwell Encyclopedia of Medieval British Literature, ed. “Encountering the Dartmouth Brut in the Midst of History,” in Digital Philology: A Journal of Medieval Cultures 3:2 (2014), 323- 330. “The Archive,” in Medievalism: Key Critical Terms, ed. Scribal Authorship and the Writing of History in Medieval England.

The History and Future of Everything. Magna Carta Canada.