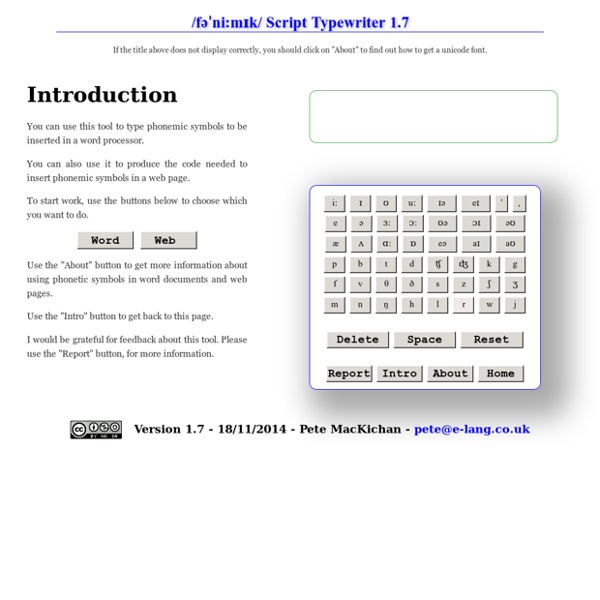 If the title above does not display correctly, you should click on "About" to find out how to get a unicode font. Introduction You can use this tool to type phonemic symbols to be inserted in a word processor. You can also use it to produce the code needed to insert phonemic symbols in a web page. To start work, use the buttons below to choose which you want to do. Use the "About" button to get more information about using phonetic symbols in word documents and web pages. Use the "Intro" button to get back to this page. I would be grateful for feedback about this tool. Word Processing Use the phonetic chart on the right to type the text that you want. When you are ready to copy what you have typed, first click the button below. Your text will appear in a pop-up window. Go to your word document and press Ctrl+V (Cmd+V in a Mac), or the Paste button, in order to paste in the word. You may need to adjust the font of the text in your document. Web Tool

Sounds of Speech - English Phonetics, simplified. Sounds of Speech™ provides a comprehensive understanding of how each of the speech sounds of American English is formed. It includes animations, videos, and audio samples that describe the essential features of each of the consonants and vowels of American English. Sounds of Speech™ is especially useful for students studying English as a second language. Learn to read Russian in 15 minutes (Yes, for real. I thought it was a joke at first, too.) Here’s a really interesting and surprisingly simple breakdown of the Russian alphabet from writer Peter Starr Northrop and cartoonist Ryan Estrada. Give it a few minutes of your time and you’ll be confidently sounding out Russian words by the end. Next up: Learning what those words mean. See more from Northrop and Estrada.

Podcasts I believe that podcasts (done properly) are a great way to learn English. One of my favourite podcasts was EnglishPod and I was disappointed when it went offline a few months ago. The good news is that it's back in a revamped form. Cambridge Free English Dictionary and Thesaurus Select any English or translation dictionary to search in that dictionary. English definitions We have corpus-informed dictionaries for English language learners at all levels.

The Greek Alphabet Phonology and Orthography Oops! Twenty-four letters only? Surely some sounds must be missing? That’s correct. There are sounds common in other languages that do not exist in Greek. Linkers and connectors - English Subject Area Contrast . In spite of / Despite Link two contrasting ideas. Followed by a noun phrase.

Google Apps and sites Sites and Apps for Education Mappe Concettuali, Aggregatori di lezioni, Repository Thinglink Mindomo Blendspace writing sijo Further reading: Sijo Primer (an introduction for those new to sijo) by Larry Gross (.pdf) Structure of the Korean Sijo by David McCann (.pdf) Sijo lectures by David McCann Part 1 (form and structure) Part 2 (history) Part 3 (sample analysis of sijo) Contact Us - Spanish Amigos Contact Us Telephone: 01932 883457 E-Mail: info@spanishamigos.co.uk Alternatively fill out our form: Our Guide to French Internet & Text Slang What do kids say these days? The digital culture keeps French learners just as confused as our grandparents when it comes to the newest expressions à la mode. The good thing is that once you master a few texting codes, you’ll be able to communicate in written French on a daily basis.

ESL Activity Templates, Customizable ESL Board Games, ESL PPT Games Templates Free ESL/EFL Online & Classroom Games ESL Games World is the ultimate English learning fun lab with lots of interactive exercises for teachers and students of English. This site is brought to you free of charge by the same team that brought you the ESL-galaxy.com, englishmedialab.com and esltower.com. We are committed to making teachers' & students' lives a lot easier by providing useful free esl resources for teaching and learning English as a Foreign or Second Language. We have no doubt that you will find this website a handy tool for your teaching and learning of English. Some of the games include: Wheel of Fortune, Snakes and Ladders, Hangman, Memory Games, Spelling Games, Slot Machine, Word Classification Exercises and a host of others.

Read and listen : Page 106, Sports made in Britain Sports made in Britain Lots of people play and watch rugby cricket and hockey across the world, especially in Commonwealth countries. These sports all started in Britain, where they were popular in the 19th century, when Britain was building its empire. British people who lived abroad taught the local people how to play their favourite sports. Sanskrit Lexicon Page Kadaitswami: "Marketplace swami." A satguru of the Nandinatha Sampradaya's Kailasa Parampara. Born ca 1820; died 1875. Renouncing his career as a judge in Bangalore, South India, Kadaitswami became a sannyasin and trained under the "Rishi from the Himalayas," who then sent him on mission to Sri Lanka. He performed severe tapas on an island off the coast of Jaffna, awakening many siddhis. For decades he spurred the Sri Lankan Saivites to greater spirituality through his inspired talks and demonstration of siddhis.