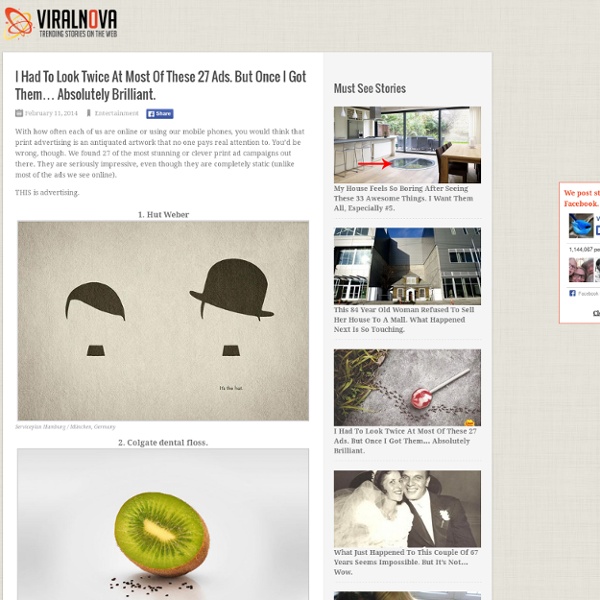 33 Awesome Inspirations for Your Dream Home Each of us probably have an idea about what our individual dream homes would look like. Maybe your dream home would have a hammock ... or maybe an indoor slide that leads outside into a pool filled with Jell-O. You can have whatever you want, after all, it's YOUR dream home. But if you need some inspiration, here are 33 awesome things you might want to include in the house of your fantasies. 1. 2. All aboard! 3. 4. 5. 6. 7. 8. 9. Too cool. 10. 11. 12. 13. 14. 15. Tubular. Sponsored Content:Sponsored Content:Sponsored Content:Sponsored Content:Sponsored Content: 40 Maps That Will Help You Make Sense of the World If you’re a visual learner like myself, then you know maps, charts and info graphics can really help bring data and information to life. Maps can make a point resonate with readers and this collection aims to do just that. Hopefully some of these maps will surprise you and you’ll learn something new. A few are important to know, some interpret and display data in a beautiful or creative way, and a few may even make you chuckle or shake your head. If you enjoy this collection of maps, the Sifter highly recommends the r/MapPorn sub reddit. You should also check out ChartsBin.com. 1. Map by Google 2. Map via Wikimedia Commons 3. Map by Stuart Laycock (via The Telegraph) 4. Map by eatrio.net via Reddit Pangea was a supercontinent that existed during the late Paleozoic and early Mesozoic eras, forming about 300 million years ago. 5. Map by Business Management EU 6. Map by The New York Times 7. Map by Teepr on Reddit 8. Map by ChartsBin.com 9. Map by Phoenix B 1of3 10. Map by Carna Botnet via Reddit

33 Graphs That Reveal Painfully True Facts About Everyday Life EmailEmail Danish writer/artist duo Mikael Wulff and Anders Morgenthaler create comedy cartoons and graphs depicting the everyday struggles, irritations, and insights of their fellow Westerners. Official-looking graphs show unofficial statistics from our daily lives that are at once unexpected and glaringly obvious. The duo publishes their satirical creations every day on Wumo, their webcomic and newspaper cartoon strip (formerly known as Wulffmorgenthaler). Take a look at this collection of graphs – are they true for you as well? Source: kindofnormal.com | Facebook (via)

26 of the Most Thought Provoking Photographs of All Time We frequently say a “photograph is worth a thousand words”, but sometimes they are worth even more. In this incredible series of photographs, the lens captures scenes that take us deep emotional journeys causing feeling ranging from uplifting joy to overwhelming sadness. The thought provoking power of these photos start us on a journey of thought and feeling that exceeds “a thousand words” with ease. The photo of the starving child’s hand being gently held by a missionary brings us feelings of despair and questions of how to help. Starving boy and missionary Image credits: Mike Wells Inside an Auschwitz gas chamber Image credits: kligon5 Heart surgeon after 23-hour-long (successful) heart transplant. Image credits: James Stanfield Father and son (1949 vs 2009) Image credits: Vojage-Vojage Diego Frazão Torquato, 12 year old Brazilian playing the violin at his teacher’s funeral. Image credits: salvemasnossascriancas.blogspot.com A Russian soldier playing an abandoned piano in Chechnya in 1994