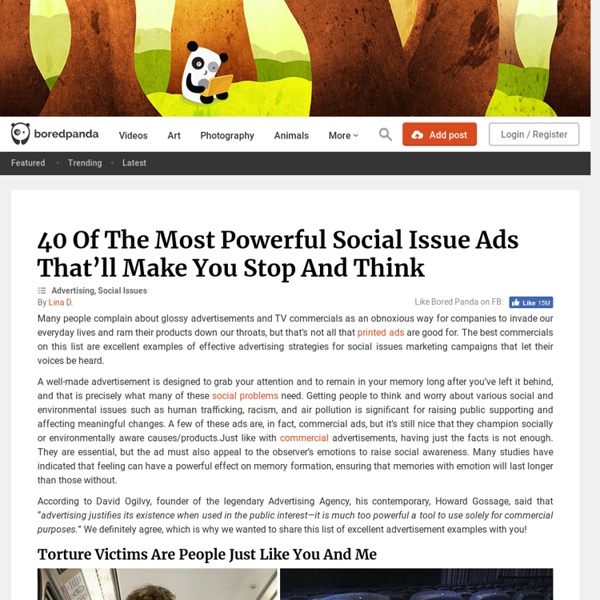 Many people complain about glossy advertisements and TV commercials as an obnoxious way for companies to invade our everyday lives and ram their products down our throats, but that’s not all that printed ads are good for. The best commercials on this list are excellent examples of effective advertising strategies for social issues marketing campaigns that let their voices be heard. A well-made advertisement is designed to grab your attention and to remain in your memory long after you’ve left it behind, and that is precisely what many of these social problems need. According to David Ogilvy, founder of the legendary Advertising Agency, his contemporary, Howard Gossage, said that “advertising justifies its existence when used in the public interest—it is much too powerful a tool to use solely for commercial purposes.” Torture Victims Are People Just Like You And Me Advertising Agency: Advico Y&R, Zurich, Switzerland Stop The Violence: Don’t Drink And Drive “THE END. Unhate Buckle up.

10 Best Plants to Grow Indoors for Air Purification trueactivist.com | Most are naturally drawn to the outdoors for a period of quiet contemplation and/or a restful area to relax in. But often snowy weather, lack of time, or location can inhibit one’s time in the wilderness. Thankfully, it is easier than ever to introduce flora into one’s home. Plants grown indoors have a variety of benefits. Reap the benefits nature can offer by adopting one (or more!) 1. Not only is the aloe plant readily available to soothe sunburns, stings, or cuts, it can also detoxify the body and is great for purifying the air. 2. According to NASA, English Ivy is the number one houseplant to grow indoors due to its incredible air filtering abilities. 3. If your green thumb is less developed, the rubber tree may be for you. 4. A wonderful corner plant, the snake plant can thrive without much light or water. 5. This beautiful flower is a wonderful low-maintenance plant to keep in the home. 6. 7. 8. 9. 10. Additional Sources: Benefits of Being Outdoors

Container Gardening For Food North Carolina restaurant with ‘no guns allowed’ sign robbed at gunpoint Photo by Don Harder / flickr.com A North Carolina restaurant that joined in with other restaurants large and small around the US in asking that customers not bring guns inside was robbed at gunpoint, a seemingly random crime that has further galvanized gun control opponents. Police in Durham are searching for three men who donned masks and entered The Pit Authentic Barbecue through the building’s back door near closing time on Sunday. Employees were forced to lie on the floor and two were assaulted although not seriously hurt. How much money the robbers got away with was not immediately clear, although all of the employees and customers still dining at the time are unharmed, according to local outlets. What has turned the incident from a local crime story into one worthy of headlines from outside North Carolina is that the restaurant’s proprietor, Greg Hatem, had previously hung a sign on the door asking that customers follow a “no weapons” and “no concealed firearms” policy. Comments

What Happens When A Photographer Takes The Same Photo From A Different Angle You’ve probably already seen the world’s most famous landmarks through photos that show them in all their beautiful, historical glory. Here’s what happens when the photo is taken from another angle. The Pyramids of Giza The Acropolis The Arc de Triomphe Stonehenge Central Park, New York City The Pantheon of Rome The Forbidden City Niagara Falls The Taj Mahal The Brandenburg Gate Mount Rushmore Mont St. The Hollywood Sign Sagrada Familia St Basil’s Cathedral Santorini Mona Lisa

The Zen Float Tent – First Affordable Isolation Tank For Home Use The benefits of sensory deprivation tanks are no secret: relaxation, deep meditation, soothing chronic muscle pain, increased athletic performance, and an overall sense of well being, but until now these benefits came at a hefty financial cost. Zen Float has created an isolation tank that can be self assembled and is cheaper than its competition. Ideally it is paving the way for higher accessibility and lowered costs in the industry. Much lighter than traditional models, the Zen Float Tent will weigh a little more than a water bed once you add the epsom salt and water. Zen Float is running a Kickstarter to fund their idea, check it out for more details on the product. Uncovered Zen Float Tent In the last 40 years, the positive effects of floating have been scientifically documented and studied though hundreds of research studies. Typically float tanks are in the $10K-30K mark, with the least expensive costing $4,500. Zen Float Tent in the Wild Credits: KarmaJello

The Plant Of Immortality & How To Use It Ancient Egyptians dubbed aloe vera the “plant of immortality”. You may have used aloe vera already if you’ve ever experienced a bad sunburn; it’s the clear green goop that is commonly found in nearly every pharmacy aisle. The earliest recorded use of aloe vera by humans goes back to 16th century B.C. Healing from the inside out Aloe vera can be a powerful healing agent when taken internally. Here are some internal ailments that aloe can help remedy: IBSConstipationIndegestionStomach ulcersIntestinal ulcersUlcerative colitisGingevitisKidney stonesDiabetesCancer Juicing with aloe Prepare raw aloe vera leaves by using a knife to cut off the hard outer layer of skin and discarding it. Drink this first thing in the morning before breakfast. Fresh aloe gel Slicing an aloe vera leaf open lets out a clear to yellowish gel. Keep the gel refrigerated to extend it’s life. Aloe skin benefits Use it as a moisturizing face gel every morning to help smooth wrinkles. Sources for this article include:

Grow a Garden from Garbage: 5 Plants to Grow from Food Scraps If you are a frugal gardener, you’ll love this idea. How about growing your garden this year from food scraps? Some of the easiest and most inexpensive plants to grow are from things that might otherwise end up in the trash can, so instead, why not use them to make some delicious, healthful crops you can enjoy with your family and friends? Following are 5 foods to easily grow from stuff you normally just throw out. But before getting started collecting your ‘scraps’, be sure to source them from organic fruits and vegetables, because pesticide and herbicide-treated plants usually won’t grow a second generation. 1. 2. 3. 4. 5. You can also grow potatoes, garlic that’s started to sprout, turmeric, pineapple, and red and white onions. Credits: naturalsociety.com, where this was originally featured.