Michael Barclay's Blog - Space To Ground: Matters of Scale in Level Design. The following blog post, unless otherwise noted, was written by a member of Gamasutra’s community. 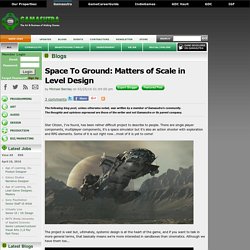 The thoughts and opinions expressed are those of the writer and not Gamasutra or its parent company. Star Citizen, I've found, has been rather difficult project to describe to people. There are single player components, multiplayer components, it's a space simulator but it's also an action shooter with exploration and RPG elements. Bobby Ross's Blog - The Visual Guide to Multiplayer Level Design. The Visual Guide to Multiplayer Level Design The following blog post, unless otherwise noted, was written by a member of Gamasutra’s community. 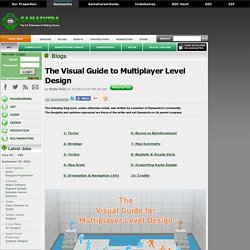 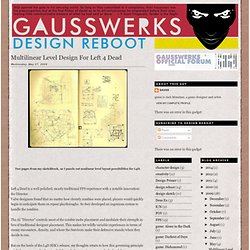 Left 4 Dead is a well polished, mostly traditional FPS experience with a notable innovation: the Director.Valve designers found that no matter how cleverly zombies were placed, players would quickly begin to anticipate them on repeat playthroughs.

(Deity) Level Design Process Work. This is a showing of some of the process work for when creating levels for Deity. 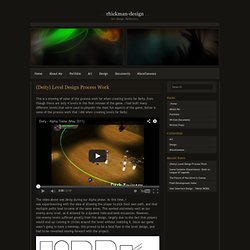 Stealth Bastard. 5 Realistic Fallacies in Game Design: Stealth. Stealth can be one of the more polarizing elements in game design. 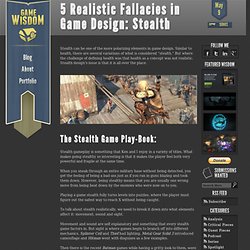 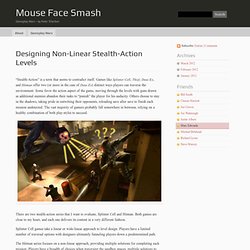 Games like Splinter Cell, Thief, Deus Ex, and Hitman offer two (or more in the case of Deus Ex) distinct ways players can traverse the environment. Some favor the action aspect of the game, moving through the levels with guns drawn as additional enemies abandon their tasks to “punish” the player for his audacity. Others choose to stay in the shadows, taking pride in outwitting their opponents, reloading save after save to finish each mission undetected. The vast majority of gamers probably fall somewhere in between, relying on a healthy combination of both play-styles to succeed.

The practical book of architecture. Vitruvius on Architecture. Another orphan text that no one wanted to enter, but that many nevertheless will be glad to see online. 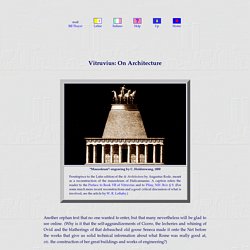 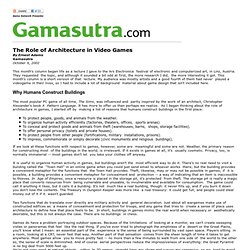 They requested the topic, and although it sounded a bit odd at first, the more research I did, the more interesting it got. This month's column is a short version of that lecture. My audience was mostly artists and a good fourth of them had never played a videogame in their lives, so I had to include a lot of background material about game design that isn't included here. Why Humans Construct Buildings. Quake live level design. Level Design. In the future I would like to work as an environment artist in one of the AAA title shipping studios. 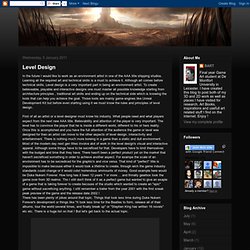 Learning all the required art and technical skiils is a must to achieve it. Although art comes before technical skills. Level design is a very important part in being an environment artist. To create believeable, playable and interactive designs one must master all possible knowledge starting from architecture principles , traditional art skills and ending up on the technical side which is knowing the tools that can help you achieve the goal. The death of the Level Designer [PDF] Narrative, Mechanics and Level Design Research. Level Design for Head-Mounted Displays: Mood, Atmosphere, and Narrative Architecture in Virtual Environments. After spending 9 months designing the virtual environment of the Shayd VR Installation, I want to expand and start doing a series of smaller “vignettes” that show off similar narratively-charged spaces designed specifically for virtual reality hardware. 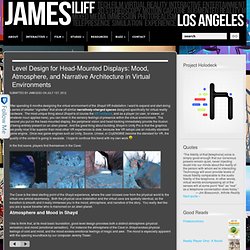 The most unique thing about Shayd is of course the VR hardware, and as a player (or user, or viewer, or whatever noun applies here), you can revel in the sensory feelings of presence within the virtual environment. The second you put on the head-mounted display, the peripheral vision and head tracking immediately provide the illusion of being entirely present on an alien planet.

And the great thing about building Shayd in Unity Pro is that the graphics are pretty nice! It far superior than most other VR experiences to date, because few VR setups use an industry standard game engine. Game Architecture. A few weeks ago I was at the Storyworlds across Media conference at the Johannes Gutenberg University in Mainz, Germany. This academic conference revolved around the creation of fictional universes and settings (storyworlds) through a variety of media. This conference was my first real contact with academic narratology and it was most definitely inspiring and interesting. Over the course of three days I got to meet a set of interesting and intelligent people and talk about a intruiging topics. Game-Maps.com - Maps, game guides and other stuff for cool games. LEVEL-DESIGN.org.