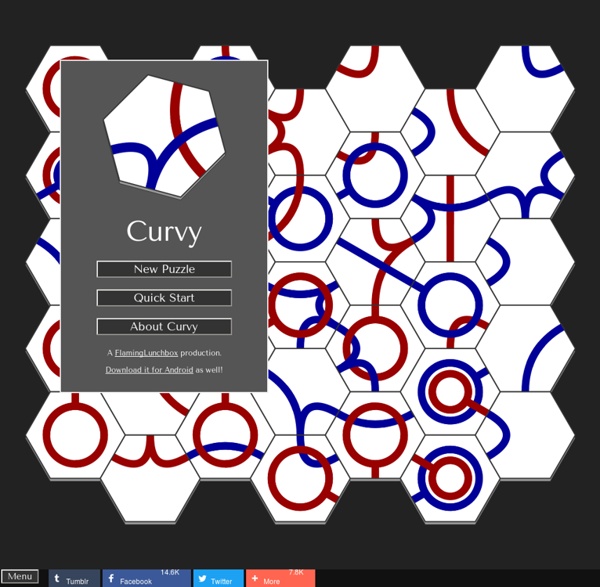 Curvy is a HTML5 puzzle game using the canvas element. Just rotate the tiles so that like colors connect. Modernizr tells me you don't have canvas support in your browser. Sadly, this game uses technology that's only in browsers with HTML5 support. We've tested Chrome 12, Firefox 4 and Opera 11. Presented to you by FlamingLunchbox is a puzzle, originally for Android phones, using a simple idea. Each Curvy puzzle consists of a grid of hexagonal tiles. Curvy allows a variety of different puzzle sizes, providing puzzles that can be quickly solved as well as more complex versions depending on the size you choose. Want it on Android? We are a participant in the Amazon Services LLC Associates Program, an affiliate advertising program designed to provide a means for us to earn fees by linking to Amazon.com and affiliated sites.

Teachable Moment - Teaching Social Responsibility By Alan Shapiro "Human existence depends upon compassion and curiosity leading to knowledge, but curiosity and knowledge without compassion is inhuman and compassion without curiosity and knowledge is ineffectual." --Victor Weisskopf, nuclear physicist The Rubik's Cube Solution How to Solve the Rubik's Cube in Seven Steps The world's most famous puzzle, simultaneously beloved and despised for it's beautiful simple complexity, the Rubiks Cube has been frustrating gamers since Erno Rubik invented it back in 1974. Over the years many brave gamers have whole-heartedly taken up the challenge to restore a mixed Rubik's cube to it's colorful and perfect original configuration, only to find the solution lingering just out of their grasp time and time again. After spending hours and days twisting and turning the vaunted cube in vain, many resorted to removing and replacing the multi-colored facelets of the cube in a dastardly attempt to cheat the seemingly infallible logic of the cube, while others simply tossed it to the side and dubbed it impossible.

Guess-the-Google UPDATE: Guess-the-google is temporarily offline for maintenance. Hopefully back online soon. About the game Guess-the-google is an addictive guessing game based on Google's image search. It turns the mental activity of searching into a fun, visual and engaging game where people can enjoy the challenge of being the fastest and most efficient at making that connection between search terms and their results. Creativity 2.0: See How Easily You Can Teach Tone I slammed my hand down on the desk. "What are you doing?" I bellowed. Frozen, terrified students stared at me, looked at their classmates and back to me.

Pacxon Additional Information: Use Pacman to capture sections of the board in Pacxon. Clear 80% to progress to the next level. Pacxon is the most popular game on the whole site! Pacxon is the most popular game on the site. I raised an addict – what could I have done differently? It has been a very interesting month. Since my first post I have connected with old high school friends who have active or recovering addicts in their families. I have been contacted by people who are living the nightmare of Addiction as parents, spouses, children and friends of addicts as well as addicts themselves. Many have shared powerful stories of recovery. I have written or spoken the words ‘I am sorry for your loss’ too many times to count, though we really do need to keep counting… Every person we lose leaves a gaping hole in the world.

Textbook disclaimer stickers This post is for people tracking the bizarre ethical slide of The Consortium for Plant Biotechnology Research, Inc. (CPBR). As you probably know from my earlier posts, CPBR sends out a yearly invitation to plant biotechnology researchers to submit grant proposals. Serious Games for Social Change by BreakAway, Ltd - Award-Winning Developer of Numerous Real-Time Strategy Games and Technologically Advanced Desktop Development Software Your goal is to orchestrate a nonviolent resistance campaign from the ground up against dictators, occupiers, authoritarians and oppressive rule. You are supported by the principles and experiences of some of the world's leading nonviolent activists such as, Gandhi, Dr. Martin Luther King, Jr. and Ivan Marovic, subject matter expert on A Force More Powerful, and member of Otpor, the Serbian resistance movement that played a critical role in ousting Slobodan Milosevich.

Revision and Editing Checklist for a Critical Essay - Writing About Fiction, Poetry, and Plays By Richard Nordquist When it comes time to revise and edit the next-to-final draft of a critical essay, this checklist should serve as a helpful guide. As a general rule, the best time to revise is not right after you've completed a draft (though sometimes this is unavoidable). Sky Map – Android-appar på Google Play Sky Map is a hand-held planetarium for your Android device. Use it to identify stars, planets, nebulae and more. Originally developed as Google Sky Map, it has now been donated and open sourced.Troubleshooting/FAQThe Map doesn't move/points in the wrong placeMake sure you haven't switched into manual mode. Does your phone have a compass?

Curious Incident of the Teacher in the Classroom Introduction to Greek Theatre & Antigone: Tufts University’s Perseus Digital Library “The Development of Athenian Tragedy,” excerpted from Thomas R. Martin’s An Overview of Classical Greek History from Mycenae to Alexander.