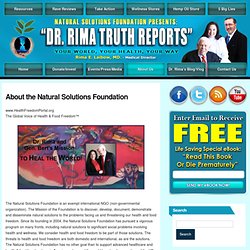 The Mission of the Foundation is to discover, develop, document, demonstrate and disseminate natural solutions to the problems facing us and threatening our health and food freedom. Since its founding in 2004, the Natural Solutions Foundation has pursued a vigorous program on many fronts, including natural solutions to significant social problems involving health and wellness. We consider health and food freedom to be part of those solutions. CODEX ALIMENTARIUS. “If accepted [S 510] would preclude the public’s right to grow, own, trade, transport, share, feed and eat each and every food that nature makes. It will become the most offensive authority against the cultivation, trade and consumption of food and agricultural products of one’s choice.

It will be unconstitutional and contrary to natural law or, if you like, the will of God.” ~Dr. Shiv Chopra, Canada Health whistleblower It is similar to what India faced with imposition of the salt tax during British rule, only S 510 extends control over all food in the US, violating the fundamental human right to food. Monsanto says it has no interest in the bill and would not benefit from it, but Monsanto’s Michael Taylor who gave us rBGH and unregulated genetically modified (GM) organisms, appears to have designed it and is waiting as an appointed Food Czar to the FDA (a position unapproved by Congress) to administer the agency it would create — without judicial review — if it passes. 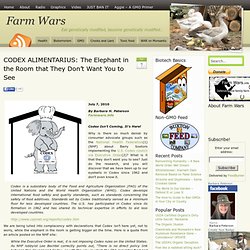 Why is there so much denial by consumer advocate groups such as the National Health Federation(1) (NHF) about Barry Soetoro implementing the U.S. Codex council via Executive Order(2)? What is it that they don’t want you to see? Just do the research, and you will discover that we have been up to our eyeballs in Codex since 1962 and don’t even know it. CODEX Alimentarius: Home. The foundation history of Codex. - The United Nations Economic Commission for Europe (UNECE) established the Geneva Protocol in which a harmonized layout for food commodity standards was proposed. 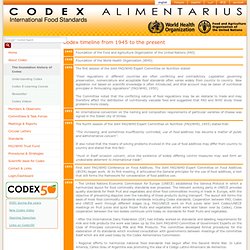 The relevant working party in UNECE provides quality standards for fresh fruit and vegetables and other food commodities moving in trade in Europe, with the objective of preventing disputes over the handling of these products during transport. The layout still forms the basis of most food commodity standards worldwide including Codex standards. Cooperation between FAO, Codex and UNECE went through different stages (e.g. FAO/UNECE work on fruit juices later Joint Codex/UNECE meetings on fruit juices and quick frozen fruits and vegetables which were later taken over by Codex). Close cooperation between the two bodies continues until today on standards for fresh fruits and vegetables. - Regional efforts to harmonize national food standards had begun after the Second World War. Guidelines. FDA Food Safety Modernization Act. The FDA Food Safety Modernization Act of 2010 (FSMA) was signed into law by President Obama on January 4, 2011. 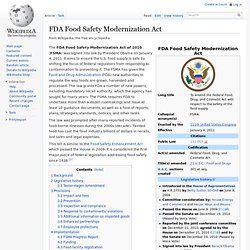 It aims to ensure the U.S. food supply is safe by shifting the focus of federal regulators from responding to contamination to preventing it. The FSMA has given the Food and Drug Administration (FDA) new authorities to regulate the way foods are grown, harvested and processed. The law grants FDA a number of new powers, including mandatory recall authority, which the agency has sought for many years. The FSMA requires FDA to undertake more than a dozen rulemakings and issue at least 10 guidance documents, as well as a host of reports, plans, strategies, standards, notices, and other tasks. USDA - Codex Alimentarius. The U.S. 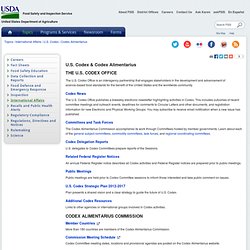 Codex Office is an interagency partnership that engages stakeholders in the development and advancement of science-based food standards for the benefit of the United States and the worldwide community. Codex News The U.S. Codex Office publishes a biweekly electronic newsletter highlighting activities in Codex. This includes outcomes of recent committee meetings and outreach events, deadlines for comments to Circular Letters and other documents, and registration information for new Electronic and Physical Working Groups. 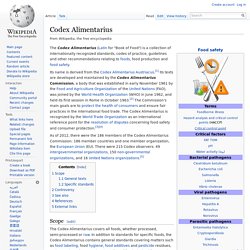 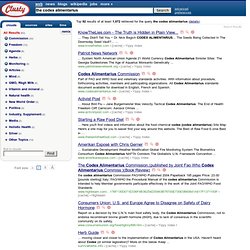