20-Year-Old Hunter S. Thompson’s Superb Advice on How to Find Your Purpose and Live a Meaningful Life 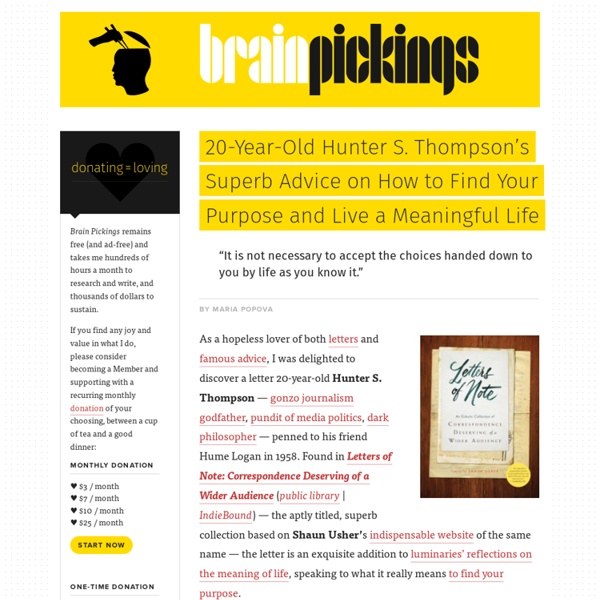 As a hopeless lover of both letters and famous advice, I was delighted to discover a letter 20-year-old Hunter S. Thompson — gonzo journalism godfather, pundit of media politics, dark philosopher — penned to his friend Hume Logan in 1958. Found in Letters of Note: Correspondence Deserving of a Wider Audience (public library | IndieBound) — the aptly titled, superb collection based on Shaun Usher’s indispensable website of the same name — the letter is an exquisite addition to luminaries’ reflections on the meaning of life, speaking to what it really means to find your purpose. Cautious that “all advice can only be a product of the man who gives it” — a caveat other literary legends have stressed with varying degrees of irreverence — Thompson begins with a necessary disclaimer about the very notion of advice-giving: To give advice to a man who asks what to do with his life implies something very close to egomania. Every man is the sum total of his reactions to experience.

The Dementia Care Economy Essay John Thackara Above: the demential care ecology of Newcastle, in North East England. Illustration by Barbara Douglas The G8 Dementia Summit made much of the fact that millions will now be spent in a race to identify a cure or a ‘disease-modifying therapy’ for dementia. In response to that grand promise, I argued that the appropriate way for nation states to spend money on dementia would be in the ratio: 95 per cent for Care, five percent for Big Research. How to Be Alone: An Antidote to One of the Central Anxieties and Greatest Paradoxes of Our Time by Maria Popova “We live in a society which sees high self-esteem as a proof of well-being, but we do not want to be intimate with this admirable and desirable person.” If the odds of finding one’s soul mate are so dreadfully dismal and the secret of lasting love is largely a matter of concession, is it any wonder that a growing number of people choose to go solo?

Why Are American Colleges Obsessed With 'Leadership'? - Tara Isabella Burton Earlier this month, more than 700,000 students submitted the Common Application for college admissions. They sent along academic transcripts and SAT scores, along with attestations of athletic or artistic success and—largely uniform—bodies of evidence speaking to more nebulously-defined characteristics: qualities like—to quote the Harvard admissions website—“maturity, character, leadership, self-confidence, warmth of personality, sense of humor, energy, concern for others and grace under pressure.” Why are American colleges so interested in leadership? On the Harvard admissions website quoted above, leadership is listed third: just after two more self-evident qualities.

40 Must-See Historical Photos EmailEmail While some photographs capture our attention because of how the artist behind the picture has decided to compose the shot, others are fascinating simply because of the subjects that they depict. Below are some captivating photographs that tell stories about our past, depicting the people, places and events that have shaped the course of history. Some of these pictures tell us about history in a way that books and documents will never be able to.

Auntie Dogma's Garden Spot Perennial, Viola Tricolor Johnny Jump Ups are a popular viola. They are called “old fashioned” favorites. These perennials are often grown as an annual, especially in northern parts of the country. Johnny Jump Ups are native to Spain and the Pyrennes Mountains.

The Shortness of Life: Seneca on Busyness and the Art of Living Wide Rather Than Living Long “How we spend our days,” Annie Dillard memorably wrote in her soul-stretching meditation on the life of presence, “is, of course, how we spend our lives.” And yet most of us spend our days in what Kierkegaard believed to be our greatest source of unhappiness — a refusal to recognize that “busy is a decision” and that presence is infinitely more rewarding than productivity. I frequently worry that being productive is the surest way to lull ourselves into a trance of passivity and busyness the greatest distraction from living, as we coast through our lives day after day, showing up for our obligations but being absent from our selves, mistaking the doing for the being. Despite a steadily swelling human life expectancy, these concerns seem more urgent than ever — and yet they are hardly unique to our age. In fact, they go as far back as the record of human experience and endeavor.

The secret to creativity, intelligence and scientific thinking: Being able to make connections 10.3K Flares Filament.io 10.3K Flares × When we shared this image from the @buffer Twitter account recently, it got me thinking. The Tweet resulted in over 1,000 retweets, which somehow was an indication that a lot of people seemed to agree with this statement. There’s a key difference between knowledge and experience and it’s best described like this: The original is from cartoonist Hugh MacLeod, who came up with such a brilliant way to express a concept that’s often not that easy to grasp. The image makes a clear point—that knowledge alone is not useful unless we can make connections between what we know.

Useful Websites Here is a list of websites we have featured in the past that might come in handy. Remember to set FuckingHomepage.com as your start page if you haven’t already. Educational/Learning favoriteandforget.com – Useful and educational links updated daily. The Death Of Expertise I am (or at least think I am) an expert. Not on everything, but in a particular area of human knowledge, specifically social science and public policy. When I say something on those subjects, I expect that my opinion holds more weight than that of most other people. I never thought those were particularly controversial statements. As it turns out, they’re plenty controversial. How to Live: Lessons from Montaigne, Godfather of Blogging by Maria Popova Don’t worry about death, pay attention, read a lot, give up control, embrace imperfection. “Living has yet to be generally recognized as one of the arts,” Karl De Schweinitz wrote in his 1924 guide to the art of living.

Brandon & Eliza: The Love Story The year was 1990. Brandon Lee had newly turned 25, and was still on his lifelong quest for acting stardom. He was a struggling actor, but an actor just the same. Brandon was still wrestling with the shadow of his father, and trying to prove to everyone that he was more than just an extension of Bruce. French-Canadian Journalist, Denis Monette interviewed Brandon in early 1990 for the French language Magazine 'Le Lundi'.

Occam's razor - Wikipedia Philosophical principle of selecting the solution with the fewest assumptions Occam's razor, Ockham's razor, Ocham's razor (Latin: novacula Occami) or law of parsimony (Latin: lex parsimoniae) is the problem-solving principle that "entities should not be multiplied without necessity"[1][2] or, more simply, the simplest explanation is usually the right one. The idea is attributed to English Franciscan friar William of Ockham (c. 1287–1347), a scholastic philosopher and theologian who used a preference for simplicity to defend the idea of divine miracles.

An Antidote to the Age of Anxiety: Alan Watts on Happiness and How to Live with Presence by Maria Popova Wisdom on overcoming the greatest human frustration from the pioneer of Eastern philosophy in the West. “How we spend our days is, of course, how we spend our lives,” Annie Dillard wrote in her timeless reflection on presence over productivity — a timely antidote to the central anxiety of our productivity-obsessed age. Indeed, my own New Year’s resolution has been to stop measuring my days by degree of productivity and start experiencing them by degree of presence. But what, exactly, makes that possible?