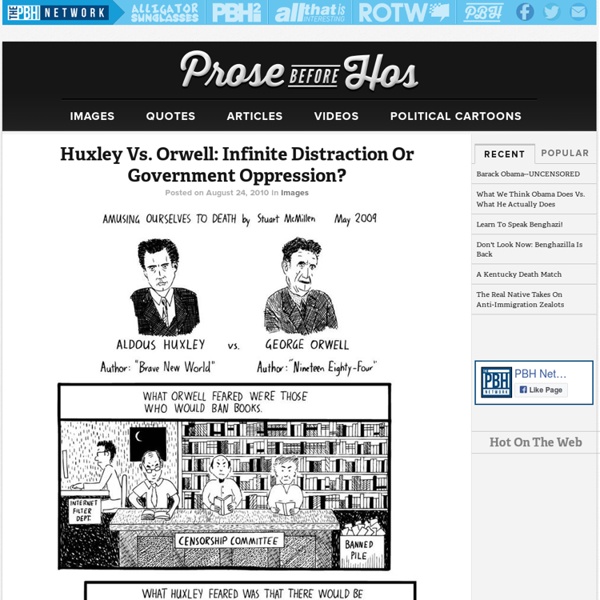 Posted on August 24, 2010 in Images The Huxley vs Orwell comic is originally from Recombinant Records: Amusing Ourselves to Death, adapted from Amusing Ourselves to Death: Public Discourse in the Age of Show Business by Neil Postman. When I read this comic, I am reminded of one of my favorite quotes from Brave New World: “It’s curious,” he went on after a little pause, “to read what people in the time of Our Ford used to write about scientific progress. They seemed to have imagined that it could be allowed to go on indefinitely, regardless of everything else. And: There was something called liberalism.

“Community management in the newsroom” - The Guardian’s Laura Oliver at Hack/Hackers London I’ve said on many occasions that I am genuinely baffled how so many news organisations seem to think that they can grow an active community on their website, without investing in any community management. At the Guardian we have several people in a role called “community co-ordinator” who fulfill this remit. One of them, Laura Oliver, spoke at the last London Hacks/Hackers meet-up. She talked about some of the lessons she and her colleagues on the news desk, James Walsh and Hannah Waldram, have learnt from doing community management around the Arab Spring, a topic on which the paper has been relentlessly live blogging. Laura described their role as a mix of “representing the reader in our editorial decisions about news on the web” and “looking at social media until my eyes go square”. Here are my notes on four of the key points that Laura made in her talk. Expect the unexpected Laura explained that your users will not use the website in the way that you do. Reward your loyal audience

Latest News Tweet late, email early, and don’t forget about Saturday: Using data to develop a social media strategy Tweet more, and embrace the weekends. That’s according to Dan Zarrella, a social media researcher (with 33,000 followers himself). Zarrella works for HubSpot, mining data on hundreds of millions of tweets, blog posts, and email newsletters to help marketers find trends. News organizations should pay attention, too. Zarrella says the right Twitter strategy depends in part on what your goals are. It’s an inexact science, but at least it’s an attempt at science where so much social media strategy is driven by intuition. After collecting more than two years of data, Zarrella shared his findings Tuesday in a webinar called “The Science of Timing.” It turns out that time is often the afternoons, when blogs and news sites are slower, and the weekend, when they’re all but asleep. Retweet activity is highest late in the work day, between 2 and 5 p.m., and the sweet spot (tweet spot?) Not only does Zarrella recommend tweeting more — he recommends tweeting the same links two or three times a day.

Artificial Intelligence Laboratory Project Summary This is an international, multi-disciplinary research project on cultural selforganisation in the origins of grammar. The project brings together members from key disciplines relevant to modelling the evolution of language: linguistics, neuroscience, psychology, artificial intelligence, and complex systems. This functionalist and cultural evolution hypothesis is clearly in radical opposition to the popular hypothesis of a genetic encoding and origin of the "language instinct". The primary aim of the Brussels AI-Laboratory in this project is to set up a number of concrete experiments in which artificial, robotic agents develop autonomously a shared communication system that has characteristics of human natural language. Funding The funding for the project will be provided by the FWO, the Flemish fund for scientific research, within the framework of the European Science Foundation program on the Origins of man, language and languages. Duration 2002-2006 (48 months) Partners

The "Big Five" IT trends of the next half decade: Mobile, social, cloud, consumerization, and big data "Much or most of these topics are in back burner mode in many companies just now seeing the glimmerings of recovery from the downturn. Much has been written lately about the speed at which technology is reshaping the business landscape today. Except that's not quite phrasing it correctly. It's more like it's leaving the traditional business world behind. There are a number of root causes: The blistering pace of external innovation, the divergent path the consumer world has taken from enterprise IT, and the throughput limitations of top-down adoption. As a result, there's a rapidly expanding gap between what the technology world is executing on and what the enterprise can deliver. At the end of the day, businesses must be able to effectively serve the markets they cater to, and doing so means using the same channels and techniques as their trading partners and customers. A tectonic technology shift "Easy", highly mobile, and "social" are the mantras of this new generation of IT.

Launch of Newspaper Extinction Timeline for every country in the world - Trends in the Living Networks Back in August I predicted that newspapers in their current form will be irrelevant in Australia in 2022. That received significant international attention including from The Australian, The Guardian, Editor & Publisher (which called me the ‘Wizard of Aussie’) and many others. Part of the point I wanted to make was that this date is different for every country. As such I have created a Newspaper Extinction Timeline that maps out the wide diversity in how quickly we can expect newspapers to remain significant around the world. First out is USA in 2017, followed by UK and Iceland in 2019 and Canada and Norway in 2020. The Australian has again covered this in a story title Deadline for newspapers as digital publications rise. Click on image to download full framework The second page of the framework explains both the global and national drivers leading to the wide disparity in how quickly newspapers will move on, and provides some notes to the framework. Below are the factors: Demographics

Man Up or Man Down? Newsweek Redefines Masculinity “We’ve arrived at another crossroads,” declares Newsweek — and this one represents a crisis for masculinity. As the magazine’s current cover story asserts, “The prevailing codes of manhood have yet to adjust to the changing demands on men.” With this cover story dedicated to “rethinking” masculinity, Newsweek launches itself into a very relevant cultural conversation. “Man Up!” Writers Andrew Romano and Tony Dokoupil get right to the heart of that matter when they ask, “What’s the matter with men?” So, how do men recover? But suggesting that men should stick to some musty script of masculinity only perpetuates the problem. Well, men will certainly not recover a healthy manhood by aping crude stereotypes or cultural constructions of “Marlboro Manliness.” The authors point to a “New Macho,” a redefined masculinity that is shaped around what Newsweek sees as the new realities in both the economy and the home. The new jobs are to be found in health care and education, for example.