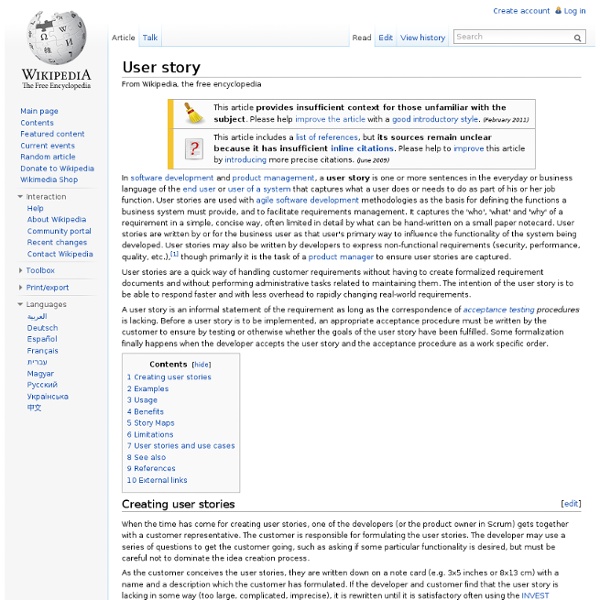 History[edit] User stories originated with Extreme Programming (XP), whose first written description in 1998 only claimed that customers defined project scope "with user stories, which are like use cases". Rather than offered as a distinct practice, they were described as one of the "game pieces" used in the planning game. However, most of the further literature thrust around all the ways arguing that user stories are "unlike" use cases, in trying to answer in a more practical manner "how requirements are handled" in XP and more generally Agile projects. In 2001, Ron Jeffries proposed the well-known Three C's formula, i.e. A Card (or often a Post-it note) is a physical token giving tangible and durable form to what would otherwise only be an abstraction; The Confirmation, the more formal the better, ensures that the objectives the conversation revolved around have been reached finally. Creating user stories[edit] Format[edit] "As a <role>, I want <goal/desire> so that <benefit>" Run tests Or

Agile software development Agile software development is a set of principles for software development in which requirements and solutions evolve through collaboration between self-organizing,[1] cross-functional teams. It promotes adaptive planning, evolutionary development, early delivery, and continuous improvement, and it encourages rapid and flexible response to change.[2] Agile itself has never defined any specific methods to achieve this, but many have grown up as a result and have been recognized as being 'Agile'. The Manifesto for Agile Software Development,[3] also known as the Agile Manifesto, was first proclaimed in 2001, after "agile methodology" was originally introduced in the late 1980s and early 1990s. The manifesto came out of the DSDM Consortium in 1994, although its roots go back to the mid 1980s at DuPont and texts by James Martin[4] and James Kerr et al.[5] History[edit] Incremental software development methods trace back to 1957.[6] In 1974, E. The Agile Manifesto[edit] Agile principles[edit]

Splitting User Stories Good user stories follow Bill Wake’s INVEST model. They’re Independent, Negotiable, Valuable, Estimable, Small, and Testable. The small requirement drives us to split large stories. But the stories after splitting still have to follow the model. Many new agile teams attempt to split stories by architectural layer: one story for the UI, another for the database, etc. This may satisfy small, but it fails at independent and valuable. Over my years with agile, I’ve discovered nine patterns for splitting user stories into good, smaller stories. (Note: As with any pattern language, I didn’t invent these patterns, I’ve just observed and compiled them. How Small? How small should stories be? When you’re in a planning meeting and you hit your trigger estimate, pull out the cheat sheet at the end of this article and try a few of the patterns until you find a good split. Which Pattern to Use You’ll often find that you can split a story using several of the patterns. Pattern #1: Workflow Steps Conclusion

Why Buyer Persona Development Should Be a Team Effort High quality buyer personas enable marketing teams to create content that is compatible with the wants and needs of a business' ideal customer. They serve as a foundation for great content strategies, informing everything from blog titles to proper distribution. We know this. However, marketers aren't the only ones who should have a say in the development. While buyer personas certainly enable marketers to create targeted content, it's that targeted content that attracts high quality leads for sales to close and client services to work with. If your personas don't reflect a collaborative effort between all departments, it's going to influence everyone's ability to do their job correctly. Are you picking up what I'm putting down here? If so, we've outlined how to go about collecting the company-wide insights you need to transform your buyer personas from vague to invaluable. Client Services Helps Marketing Consolidate Interviewees Provide a Structure for The Personas Looking for more guidance?

Manifesto for Agile Software Development INVEST in Good Stories (French) In XP, we think of requirements of coming in the form of user stories. It would be easy to mistake the story card for the “whole story,” but Ron Jeffries points out that stories in XP have three components: Cards (their physical medium), Conversation (the discussion surrounding them), and Confirmation (tests that verify them). A pidgin language is a simplified language, usually used for trade, that allows people who can’t communicate in their native language to nonetheless work together. But what are characteristics of a good story? I – IndependentN – NegotiableV – ValuableE – EstimableS – SmallT – Testable Independent Stories are easiest to work with if they are independent. We can’t always achieve this; once in a while we may say things like “3 points for the first report, then 1 point for each of the others.” Negotiable… and Negotiated A good story is negotiable. Valuable A story needs to be valuable. This is especially an issue when splitting stories. Estimable Small Testable

Design Thinking With Persona Lean Startup Lean startup is a methodology for developing businesses and products. The methodology aims to shorten product development cycles by adopting a combination of business-hypothesis-driven experimentation, iterative product releases, and validated learning. The central hypothesis of the lean startup methodology is that if startup companies invest their time into iteratively building products or services to meet the needs of early customers, they can reduce the market risks and sidestep the need for large amounts of initial project funding and expensive product launches and failures.[1][2] History[edit] Although the lost money differed by orders of magnitude, Ries concluded that the failures of There, Inc. and Catalyst Recruiting shared similar origins: "it was working forward from the technology instead of working backward from the business results you're trying to achieve Precursors[edit] Overview[edit] Definitions[edit] Definitions based on The Lean Startup[edit] Minimum viable product[edit]

Planning poker Planning poker, also called Scrum poker, is a consensus-based technique for estimating, mostly used to estimate effort or relative size of development goals in software development. In planning poker, members of the group make estimates by playing numbered cards face-down to the table, instead of speaking them aloud. The cards are revealed, and the estimates are then discussed. By hiding the figures in this way, the group can avoid the cognitive bias of anchoring, where the first number spoken aloud sets a precedent for subsequent estimates. The method was first defined and named by James Grenning[1] in 2002 and later popularized by Mike Cohn in the book Agile Estimating and Planning,[2] whose company trade marked the term. Process[edit] The reason[edit] The reason to use Planning poker is to avoid the influence of the other participants. Equipment[edit] Planning poker is based on a list of features to be delivered and several copies of a deck of numbered cards. Planning Poker card deck

The Complete Beginner's Guide to Creating Marketing Personas 4.7K Flares Filament.io 4.7K Flares × I am writing this post to Dan, Mary, Steven, and Rachel—one of whom is likely you. You see, Dan, Mary, Steven, and Rachel are personas, created with a combination of raw data and educated guesses, representing slices of this blog’s readership. Dan could be you, and Mary could be your coworker. What these sketches provide is a touchstone for creating content: When I can put a name and a background to the people reading what I write, I can hopefully meet their needs even better. The same holds for marketing and sales. The basic marketing persona template I love this description of a marketing persona from the team at Krux: With personas, businesses can be more strategic in catering to each audience, internalize the customer that they are trying to attract, and relate to them as human beings. So how many of these “human beings” do you need to create? Many of these templates include the same basic information. Name of the persona Job title Demographics P.S.

Here's What The Average Tech Startup Looks Like Between reading GeekWire every day, watching the Tech Stars Seattle Demo Day pitches, seeing the latest infographic from Gist, talking to Angels and VCs, and discussions with fellow venture backed entrepeneurs, I have lately been wondering what the “average” tech startup looks like today. It is a lot smaller than I had thought. To help answer this question, I turned to the detailed information published on the Tech Stars web site. This is a treasure trove of statistics, listing 104 graduate startups, from the initial 2007 class in Boulder to the Spring 2011 classes in Boulder, Boston, and New York (including 2010 Seattle, but not the Fall 2011 Seattle graduates). Unfortunately, YCombinator and 500 Startups do not post equivalent data on their 350+ similar graduates, but 104 is quite a good sample size. First to note, is that although Tech Stars is five years old, 84 of the 104 companies listed are less than three years old. Who knew?

Scrum Scrum is an iterative and incremental agile software development framework for managing product development. It defines "a flexible, holistic product development strategy where a development team works as a unit to reach a common goal", challenges assumptions of the "traditional, sequential approach" to product development, and enables teams to self-organize by encouraging physical co-location or close online collaboration of all team members, as well as daily face-to-face communication among all team members and disciplines in the project. A key principle of Scrum is its recognition that during a project the customers can change their minds about what they want and need (often called "requirements churn"), and that unpredicted challenges cannot be easily addressed in a traditional predictive or planned manner. Later, Schwaber with others founded the Scrum Alliance and created the Certified Scrum Master programs and its derivatives. Each sprint is started by a planning meeting.