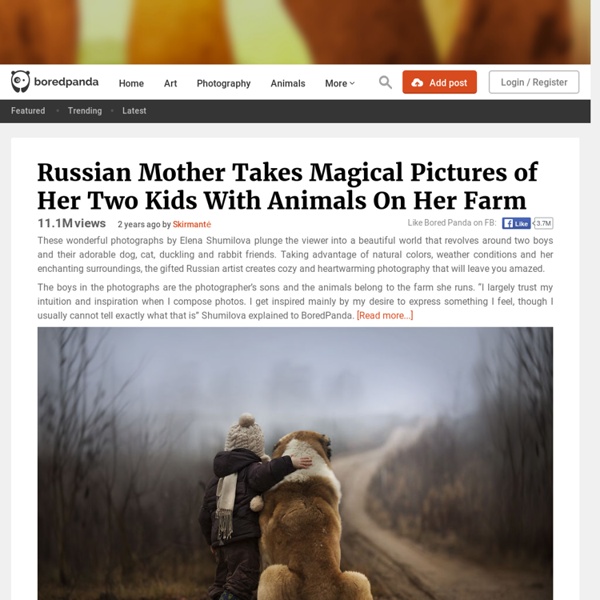 These wonderful photographs by Elena Shumilova plunge the viewer into a beautiful world that revolves around two boys and their adorable dog, cat, duckling and rabbit friends. Taking advantage of natural colors, weather conditions and her enchanting surroundings, the gifted Russian artist creates cozy and heartwarming photography that will leave you amazed. Show Full Text The boys in the photographs are the photographer’s sons and the animals belong to the farm she runs. Rural settings, natural phenomena and the changing seasons seem to be the greatest stimuli in her works. Shumilova told us her passion for photography manifested in early 2012 when she got her first camera. We suggest you take a cup of tea, lean back comfortably in your armchair and browse this beautiful collection of Elena Shumilova’s photographs. See her gallery on: Flickr | 500px Thanks for sharing! 3x per week 30,000,000+ monthly readers Error sending email “Children and animals – it’s my life.

Real Life Mowgli: Girl Who Grew Up in the African Wildlife Riding a five-ton elephant, whom she called ‘my brother’, chilling with a cheetah or hugging a giant bullfrog as if it were a Teddy bear. The childhood of a French girl Tippi Degre sounds more like a newer version of Mowgli, rather than something real. A white child, she was born in Namibia to French wildlife photographer parents, and grew up in Africa. The little girl saw nothing unusual about her company: “I don’t have friends here. Tippi is now 23 years old, and the only child to wildlife photographer parents Sylvie Robert and Alain Degre, who published her photos in a book called Tippi of Africa. Website: tippi.org, Book: Tippi of Africa

Russian Photographer Takes Stunning Portraits With REAL Animals What you’re about to see is not Photoshop – Moscow-based Russian photographer Katerina Plotnikova created these stunning images with the help of real live animals! She is only the latest in a line of excellent surreal photographers covered by Bored Panda, but her unique choice of models brings her amazing compositions to the next level. [Read more...] While seemingly dangerous, these shots were made possible with the help of professional animal trainers. Even without the well-trained animals, her photos possess a rich mysticism and dream-like quality that makes them absolutely enchanting. Source: Facebook | Vkontakte | 500px

Dancers out and about [25 pictures] Photographer Jordan Matter created his series “Dancers Among Us” as a reminder to “relish moments large and small, recognize the beauty around you, and be alive!” Here are a bunch of the pics, but there are even more at his website and in his book. 'Women Are Heroes' By JR Features Amazing Street Art With A Social Message JR is a French artist and photographer who creates giant portraits of people, which he places around public spaces. Winner of the TED Prize 2011, he has pasted faces on the wall between Israel and the Palestinian Territories, throughout Paris and the favelas of Brazil, as well as in and around art galleries around the world. In 2008, he created a series called Women Are Heroes, featuring women who had been the target of conflict in Sierra Leone, Liberia, Sudan, Kenya, Brazil, India and Cambodia, pasting their faces on walls, roofs, trains, sidewalks and more, making people face these otherwise-hidden figures in their societies. Abrams has just published a book, called "Women Are Heroes: A Global Project by JR" ($40) featuring some of the most striking images from his project. See the slideshow below - and be inspired. Close

Amazing Color Photographs of Daily Life in Paris in the 1950's (Photos by Peter Cornélius) One Woman Documents Seven Years Of Her Changing Body In Stunning Nude Self-Portraits Photographer Polly Penrose started her project, "A Body of Work," seven years ago. She was inside her step-father's factory, amidst an array of industrial machines and contraptions -- inventions like tables built for vets to operate on race horses. It was there that she first stripped down naked and snapped a self-portrait. The gesture initiated a years-long fascination with inserting her nude body into forgotten places. Penrose would seek out quiet locations, like abandoned houses and empty hotel rooms, and there she would photograph herself, stretched out from head to toe or pinched into fetal position. From 2007 to today, she's documented the physical and emotional changes her form has undergone, from marriage to pregnancy to grieving loved ones. City of London, 2008 "It’s often a fight to ‘fit in’, to become a part of that space," Penrose writes in her artist statement. Left: London, October 2008; Right: London, September 2010 London, June 2011 Penrose isn't done with the project.

The Old Girls Club: a network for women in photography “We should have an old girls network – not just an old boys network. Why don’t we? Why aren’t we networking as well as men are in the photography business?” Photographer Anna Fox raised this point at Close Up, an event we hosted in October with Metro Imaging about women in the image industry. “The overwhelming feeling [on the night] was so positive,” Alice recalls. Building on the success of the first session, and inspired by Anna Fox’s words, Kate and Alice decided to set up The Old Girls Club. Image: Alice and Kate, founders of The Old Girls Club Networking is one issue among many – all of which Kate and Alice hope to address through the Old Girls Club. “I don’t think it’s malice,” Kate stresses. They’re also running Instagram takeovers and a section called Women in Focus, updated every six months, showcasing women who are doing interesting projects. What’s their advice for women starting out in photography? Are you a woman photographer? Images courtesy of the Old Girls Club

Self-Portrait Series Straddles the Line Between Fantasy and Reality Rachel Baran who no doubt is a talented photographer, likes to tag herself as having a small purse but big dreams. Obviously she does a lot of that dreaming while wide awake, behind her camera. The young 20-year-old from Ohio says that “One of my many very fancy hobbies is taking photographs of mainly myself but I promise I’m not a total narcissist.” The young lady makes the disclaimer, as she uses herself as the subject in most of her work. Baran unashamedly uses herself in all these creations, a rather eccentric set of self-portraits. They manifest a dark emotional tone that could only be the subliminal musings of a mind that is absorbed with the murky images of bad dreams and nightmares. What is particularly impressive about Baran’s photos is the narrative behind each of them, especially with the knowledge that what you see is very intimately connected with Baran herself, a solitary female in a make-believe world. See her captivatingly moody images here.