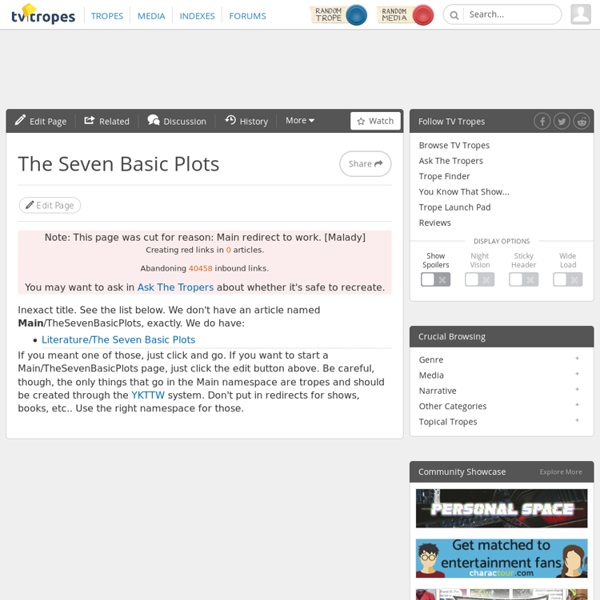 Note: This page was cut for reason: Main redirect to work. [Malady] Creating red links in 0 articles. Abandoning 40458 inbound links. You may want to ask in Ask The Tropers about whether it's safe to recreate. Inexact title. Literature/The Seven Basic Plots If you meant one of those, just click and go. Related:  Story

Writers' forum - J K Rowling's Writing Process | authonomy writing community From this site Planning This is by far the most underrated of the steps in the writing process. And in the final wash up it is absolutely the most important. It was 1990 and Jo Rowling was on a train between Manchester and London. But did she go home and immediately begin scribbling a story with these characters? Would you attempt to build a house without plans? When you are writing, you are just writing. JK Rowling planned the Harry Potter series for five years before she put pen to paper on the first book She wrote the entire first book, and felt as though she were “carving it out of this mass of notes”. This is the best possible place for you to be in when you are writing a novel. Jo Rowling said she felt she “had to do right by the book”. Jo Rowling rewrote the opening chapter of Harry Potter and the Philosopher’s Stone a total of 15 times. Writing and rewriting are separate processes. And who knows? Suzanne Harrison

How to convert your learning into story, step-by-step Following a sweet true-story-based and lovely introduction from Aaron Stroud, his wife Katie takes the stage to tell us about story for learning during session W202 of ASTD2014. She said that when she researched the topic herself, she found a lot of information about the importance of story and it’s benefits, but not much about how to actually go about developing a story for learning purposes. I’m glad to hear this, because I had the same experience. Of course, I have lots of little story-examples that I occasionally use to illustrate a point in training. Katie started by telling her own rags to riches story * When listening, I was drawn to hear more and I started to like her more. * There are many other types of story (boy meets girls, Hero’s Journey …) which we are not necessarily going to see here. To start making your story, you need first to define the problem in story-terms Background – my story is about an IT consultancy company. Place it – where does the problem happen?

For Your Company To Last, The "Brand" Must Die. But Stories Should Survive Off the coast of Newfoundland is a place called Fogo Island . At the height of its economy, about 3,000 people were living on the island, mostly employed by the fishery. When the fish population declined in the 1960s, so did the human population, as many were forced to look elsewhere for work. Recently, a brother and sister who were a part of that exodus have returned home. The project was about telling an already wonderful story directly. Bruce Mau Design was invited in to help clearly define the story of what the Cobbs are about. We are proud to be associated with the project, even in our humble way. Branding's beginnings We use the word "branding" to describe the act of shaping the perceptions of a product or service for consumers. Our modern notion of branding was invented during the Industrial Revolution, when products were being mass-produced and exported. But in every case, at these early stages of branding, the product was still the heart. The new consumer A new force has emerged.

Top Blurb No-Nos Struggling with your blurb? Who isn't! Sometimes all you need is to go through and prune out the "blurb no-no's." Here are some of mine, in no particular order. Fintoozler Syndrome* Fantasy writers especially have trouble with Fintoozler Syndrome; it's when you have so many weird words in your blurb that no one has any idea what you're talking about. Made-up example: When the Wizards of Z'mesdhal find the Slati'shfiker of Gromaldi, young Fergalush Hornshub is thrust into a desperate race to save the land of Dhariq'ween. (Oh yeah, extra points for lots of apostrophes.) When a group of evil wizards finds a powerful stone, young Fergalush Hornshub must race against time to save his people. Yeah, I know, it's not a great story, but I'm not writing a book here, I'm writing a blurb. ;) Non-fantasy writers can also fall into this trap by throwing too many names and/or places at the reader all at once. Show Stoppers These are words that will stop your blurb stone dead in its tracks. Nope.

Your Expertise is Worth Money: 5 Sites You Can Write For Plenty of people start blogging with the hope of making some money off their expertise. But it can be difficult to turn a profit on blogging: until you’ve built up a significant readership, you can expect only a few cents worth of Google AdSense revenue. There are certainly easier ways to earn money by writing about your area of expertise. There are plenty of sites that will pay for your short articles, although several have some drawbacks. Associated Content Associated Content has been online for almost four years. You must have a PayPal account to receive payments from Associated Content. Helium Another fairly well-known site that accepts articles is Helium. Helium also makes payments through PayPal and will only pay out if your balance has reached at least $25. myLot If you don’t want to write a full article, you can earn money on myLot by participating in discussions on the site. Suite101 Unlike the previous three sites, Suite101 requires prospective writers to apply. BrightHub

Techniques to engage people when you facilitate change Dutch actor, coach, trainer and speaker Juanita Coble kicks off session #W110 on change and the importance of engaging people in the process. Welcome to ASTD2014 day 4… According to Coble, Neuroscience tells us that when people are uncertain, they move into an “away state”. This accounts for many of the negative reactions to whatever change is going on. Starting with a role-play, Coble took the stage as an actress, playing the role of interim director, Mrs Smith. “She” wouldn’t answer my questions, “she” was very direct, seemed to think she knew it all and was overly positive, but in a strange fake way. Following Coble’s stage moment, session participants were invited to play a role and discuss their reactions to the change with “colleagues”. Thinking about one of our own changes, Coble asked us to make notes in answer to 3 different questions: “What has to go?” As the session moved on, participants were really encouraged to express their feelings about those things. I believe that.

Writing Your Brand Story This entry was originally posted on December 5, 2005 at the old Brandstory blog (link available for a limited time). Every once in a while I read a post that makes me think, I wish I had written that. This post by John Winsor is one. Adding to thoughts posted by John Moore at Brand Autopsy (follow the link for a free PDF), John Winsor writes about the elements of a good story. Great ideas to keep in mind when developing or telling your story. It’s one thing to talk about what your story should include. 1. 2. 3. 4. 5. 6. 7.

Writing Act I of Your Screenplay Every act in the three-act structure has a set of tasks to accomplish. The first act serves as your audience's introduction to the entire world of the script — people, places, time frame, and all. Remember that your audience members begin in a neutral darkness. In their advance toward some new awareness, they're not unlike visitors in a foreign country. You need to orient them fairly quickly to the story that's about to unfold. Your opening moments Begin with an image. The eye picks up details much more quickly than the ear, and nothing's more disconcerting than staring at talking heads. Also, everything that happens in the first moments of a film is important. The first ten pages If your opening image grabs the audience's attention, you have roughly ten pages after that opening to convince them that your film is worth watching. The first ten pages provide an initial criterion on which to judge the ensuing story. Everything that happens now is a setup for what comes next. Plot point one

Lessons In Brand Storytelling We’re sick of the same old song and dance. Our tastes have expanded. Not just with food, but how we consume information, relationships, and experiences. Social media storytelling is changing things. We demand communication that doesn’t insult our intelligence. Distanced authority is how too many companies have been taught they’re supposed to talk. Of course then there are the brands that step into social media like a wolf in sheep’s clothing. We’re sick of the self-promotional ego machinations. Web 2.0 democratized how brands share, sell, or shill products to a global audience. It’s hard to admit, brands don’t get far using the new tools if they’re still talking in the old voice. As the NYC street artist and philosopher De La Vega reminds us, ‘Believe in yourself. Thankfully, I’m not the only one drinking this flavored kool aid. Whether it’s established innovators like Zappos and Zipcar or some of the newer upstarts like Moo.com, crowdSPRING, and Mailchimp. And Kimbarovsky explains:

Answer the...Call To Adventure: How Many Plots are There? For a long time now scholars have sought an answer to this question and depending on where you look and who you ask, you’re likely to get an answer of anything from two to two hundred. There are conflicting responses to this question because a definitive answer does not actually exist. A lot of writers would even argue that it’s pointless to even ponder such a thing. It seems to make sense, though, to look at what people have had to say about the issue and for writers to make up their own minds. Two Plots A stranger comes to town. Someone leaves on an adventure. Seven Plots The comedy. Rebirth. Rags to riches. Voyage and return. Overcoming the monster. The quest. Tragedy. And then there’s thirty-six Supplication Deliverance Revenge Vengeance by Family upon Family Pursuit Victim of Cruelty or Misfortune Disaster Revolt Daring Enterprise Abduction Enigma Obtaining Familial Hatred Familial Rivalry Murderous Adultery Madness Fatal Imprudence Involuntary Crimes of Love Kinsman Kills Unrecognised Kinsman Adultery Ambition