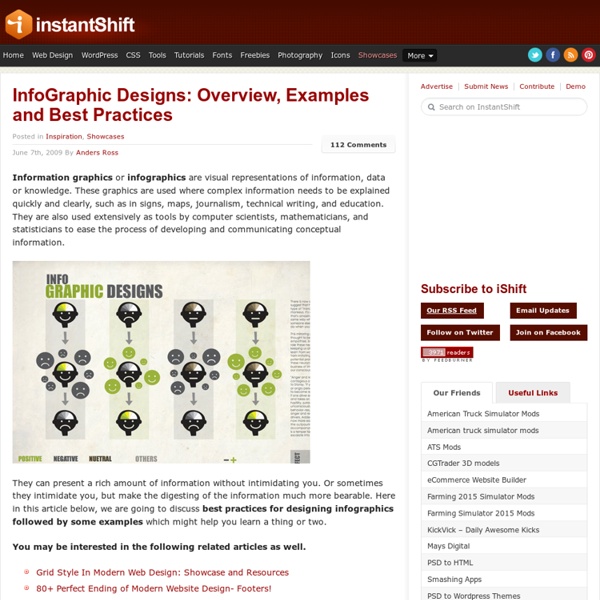 Information graphics or infographics are visual representations of information, data or knowledge. These graphics are used where complex information needs to be explained quickly and clearly, such as in signs, maps, journalism, technical writing, and education. They are also used extensively as tools by computer scientists, mathematicians, and statisticians to ease the process of developing and communicating conceptual information. They can present a rich amount of information without intimidating you. Or sometimes they intimidate you, but make the digesting of the information much more bearable. Here in this article below, we are going to discuss best practices for designing infographics followed by some examples which might help you learn a thing or two. You may be interested in the following related articles as well. Feel free to join us and you are always welcome to share your thoughts that our readers may find helpful. Don’t forget to and follow us on Twitter — for recent updates. 01.

Infographic Information graphics or infographics are graphic visual representations of information, data or knowledge intended to present complex information quickly and clearly.[1][2] They can improve cognition by utilizing graphics to enhance the human visual system’s ability to see patterns and trends.[3][4] The process of creating infographics can be referred to as data visualization, information design, or information architecture.[2] Overview[edit] Infographics have been around for many years and recently the proliferation of a number of easy-to-use, free tools have made the creation of infographics available to a large segment of the population. Social media sites such as Facebook and Twitter have also allowed for individual infographics to be spread among many people around the world. In newspapers, infographics are commonly used to show the weather, as well as maps, site plans, and graphs for statistical data.

10 Awesome Free Tools To Make Infographics Advertisement Who can resist a colourful, thoughtful venn diagram anyway? In terms of blogging success, infographics are far more likely to be shared than your average blog post. How Americans Die By Matthew C. Klein / Bloomberg View / April 17, 2014How Americans Die The mortality rate fell by about 17 percent from 1968 through 2010, years for which we have detailed data.Almost all of this improvement can be attributed to improved survival prospects for men. It looks like progress stopped in the mid-1990s… Mortality rate per 100,000 people …but that’s only because the population has aged a lot since then.

25 Best Infographics Of 2011 That Are Still Relevant Today The year of 2011 went very fast for us in the development world and I am sure some of you accomplished important things for your career during this year. But besides our personal achievements, the whole industry managed to reach something that was unthinkable around 10 years ago. To show you how the web progressed during the past year, I collected a series of infographics from the internet and hope, by the end of this article, you will realize what huge potential this year of 2012 has.

Diagramly – A Handy Tool For Creating Quick Flowcharts The best thing about Diagramly is how accessible it is. You just click a URL, and you’re in. There’s no download, no account registration, and you don’t even need Flash to use it. It really couldn’t be simpler to get started. The worst thing about Diagramly (I’ll just get this out of the way right now) is the utter lack of documentation. For example, check out this diagram I made for you, showing the ideal MakeUseOf reader’s workflow: Infographics, Explained by LEGOs LEGO bricks illustrate the simple idea behind infographics. Data: sorted, arranged, presented visually. Got it? Good. Now let's raid the toy box and play with the "data." Free Vector Infographic Kit This week’s freebie is a huge vector set for creating infographics. Included in the package are over 50 elements, ranging from graphs and charts to maps and symbols. Let your infographic stand out with these bold and beautiful infographic resources. In the download the filetypes are AI, EPS and SVG so you can use this kit at any scale, easily edit the color scheme, and the data points. Enjoy!