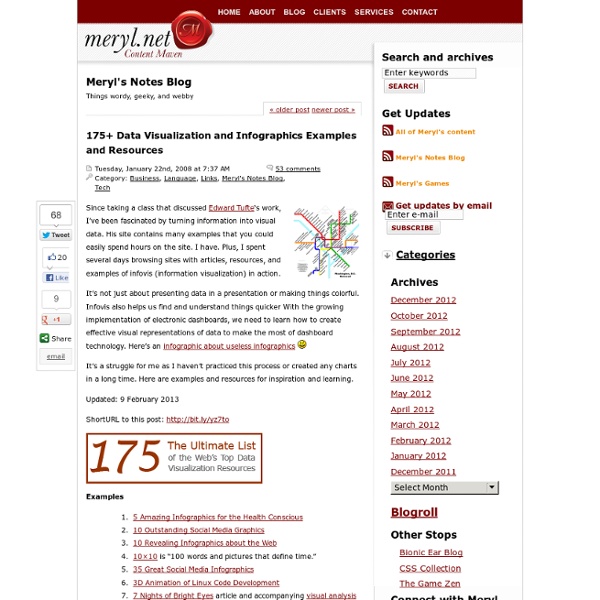 Things wordy, geeky, and webby Since taking a class that discussed Edward Tufte‘s work, I’ve been fascinated by turning information into visual data. His site contains many examples that you could easily spend hours on the site. I have. Plus, I spent several days browsing sites with articles, resources, and examples of infovis (information visualization) in action. It’s not just about presenting data in a presentation or making things colorful. It’s a struggle for me as I haven’t practiced this process or created any charts in a long time. Updated: 9 February 2013 ShortURL to this post: Examples 5 Amazing Infographics for the Health Conscious10 Outstanding Social Media Graphics10 Revealing Infographics about the Web10×10 is “100 words and pictures that define time.”35 Great Social Media Infographics3D Animation of Linux Code Development7 Nights of Bright Eyes article and accompanying visual analysis of Conor Oberst.AInews.org: Note the .org! Blogs Resources

Tipped over: social influence "tipping point" theory debunked Clive Thompson has been getting some well-deserved attention for his recent Fast Company piece, in which Columbia University sociologist Duncan Watts explodes the hierarchical theory of social influence and trend propagation popularized by Malcolm Gladwell in the bestselling book The Tipping Point. Gladwell's model, which has itself become something of a cultural epidemic, posits that a few hyperconnected "influentials" are the key to the runaway viral spread of fads, fashions, ideas, and behaviors. These pivotal individuals, according to Gladwell, determine which trends will wither on the vine and which will "tip," becoming mass phenomena.

Screen Australia and StoryLabs announce multi-platform storytelling one-day seminar Share Monday 31 October 2011 Screen Australia and StoryLabs will present world-class digital storytelling talent in a one-day public seminar at the State Library in Melbourne on Tuesday 29 November. Speakers include renowned pioneer Lance Weiler (US) on his first trip to Australia, named by WIRED magazine as ‘one of the 25 people helping to reinvent entertainment and change the face of Hollywood’. The seminar, Multi-platform Storytelling: From Idea to Market will feature case studies and practical guidance on producing a multi-platform strategy for features, TV drama, documentary, game, online projects or brands.

Flowing Data – Water Systems Visualizing Water Systems In conjunction with Melbourne Water OOM Creative have designed a series of data visualizations to illustrate water as an urban resource. This project developed from an exhibition piece in Melbourne’s State of Design Festival – into a series of large scale prints – and recently released as an online interactive data visualization and foyer prints. OOM Creative were selected as one of four innovative design teams for the 2010 State of Design Exhibition entitled Creating Liveable Cities. Sponsored by Melbourne Water the exhibition examined the issue of water within urban environments and OOM Creative’s response was presenting 10 years of water data as an realtime installation and large scale prints. Data journalism at the Guardian: what is it and how do we do it? Data journalism. What is it and how is it changing? Photograph: Alamy

How A Redesigned Electricity Bill Could Make You Smarter And Save Cash If you live here in the states, chances are your electricity bill has not been significantly redesigned in more than 20 years. Which would be fine if the thing were easy to read in the first place. But, well, see for yourself. Social Thievery: Will Your Tweets Get You Robbed? [INFOGRAPHIC] Social networks are an information gateway that allow people to share and connect in ways that were never previously possible. They can also be a pretty clever way to rob your neighbors. Burglars are starting to realize the criminal possibilities of social media. For example, Foursquare or Facebook can show when somebody is away from their home or traveling for the weekend. What better time to ransack when your victim is in Aruba? Credit Sesame, a personal finance tool and website, conducted a survey of 50 ex-burglars in the UK Nearly 80% of them said they had used Facebook, Twitter and Foursquare to target which properties to rob.

11 Of The Most Influential Infographics Of The 19th Century We live in a world steeped in graphic information. From Google Maps and GIS to the proliferation of infographics and animated maps, visual data surrounds us. While we may think of infographics as a relatively recent development to make sense of the immense amount of data available on the Web, they actually are rooted in the 19th century--a fact that I write about in my most recent book. [John Smith’s “Historical Geography” (1888) portrays a country driven by two fundamentally different ideals: the avaricious slaveholding South and the God-fearing, righteous North.]