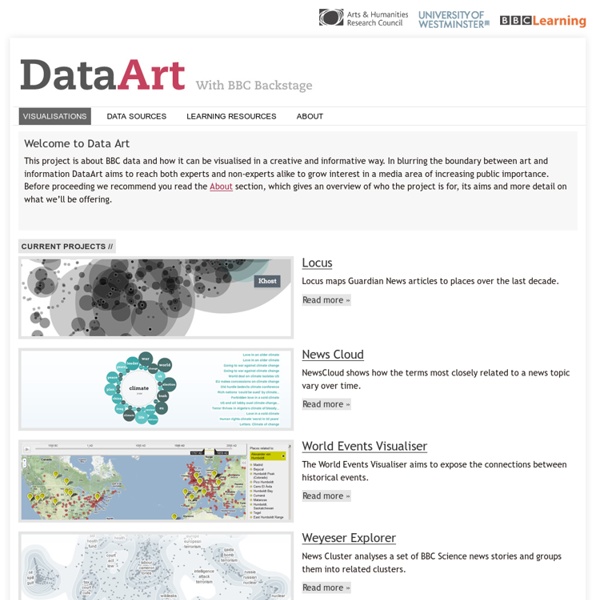 No, they¿re not photographs: Astonishing acrylic paintings which are so detailed they look like they were taken on a camera By Damien Gayle Published: 11:28 GMT, 9 June 2012 | Updated: 14:56 GMT, 9 June 2012 With their spectacular use of focus and reflected light, these incredible artworks look like carefully composed still-life photographs. But in fact they are all painstakingly rendered on canvas with acrylic paints by Canadian artist Jason de Graaf. The hyperrealistic paintings, which almost appear as if they are computer generated, are like freeze frames of a world more magical than our own - inspiring the term Magic Realism as a description. The X-Statix: Acrylic on canvas 30in x 24in

10 Best Data Visualization Projects of the Year – 2010 Data visualization and all things related continued its ascent this year with projects popping up all over the place. Some were good, and a lot were not so good. More than anything, I noticed a huge wave of big infographics this year. It was amusing at first, but then it kind of got out of hand when online education and insurance sites started to game the system.

40 Essential Tools and Resources to Visualize Data One of the most frequent questions I get is, "What software do you use to visualize data?" A lot of people are excited to play with their data, but don't know how to go about doing it or even start. Here are the tools I use or have used and resources that I own or found helpful for data visualization â€“ starting with organizing the data, to graphs and charts, and lastly, animation and interaction. Organizing the Data by sleepy sparrow Data are hardly ever in the format that you need them to be in. 15 Stunning Examples of Data Visualization Data Visualization is a method of presenting information in a graphical form. Good data visualization should appear as if it is a work of art. This intrigues the viewer and draws them in so that they can further investigate the data and info that the graphic represents. In this post there are 15 stunning examples of Data Visualization that are true works of art.

10 significant visualisation developments: July to December 2012 To mark the milestone of each mid-year and end of year I try to take a reflective glance over the previous 6 months period in the data visualisation field and compile some of the most significant developments. These are the main projects, events, new sites, trends, personalities and general observations that have struck me as being important to help further the development of this field. Earlier this year I published this collection for the first 6 months of 2012 and now I’d like to mark the end of 2012 with my latest perspective. I look forward to hearing from you with suggestions for the developments you believe have been most significant.

featured projects Quantified Other Five weeks of my father's Nike Fuel data Tatelets Generative bracelet based on artworks from Tate Modern Threads A Beautiful Poster Packed With a Year of Global Weather Data The Weather Radials poster is about as much meteorological data as you can cram onto a single sheet of paper. Raureif GmbH Each day of 2013 is represented by a single line. The bottom is the low temp; the top is the high. The color is dictated by the average. Art and the Internet of Things Wireless is increasingly pulling in all kinds of applications, platforms, services and things (rfid) into networks. Many people communicate through mobiles, blackberries, digital organizers, palmtops. Cars become information spaces with navigational systems and consoles like Nintendo DS have wireless capacities and get linux kernels installed.We are witnessing a move towards pervasive computing and disappearing technologies in intelligent clothing (wearables), smart environments (knowing where and who we are), pervasive games, and we will see doors opening for some and closing to others. Mimickry and camouflage will become part of application design. Ipods and Iphones will show colors and produce sounds corresponding with your surroundings.

Citeology - Projects Update: We have submitted a Citeology paper to alt.CHI which you can download here. Citeology looks at the relationship between research publications through their use of citations. The names of each of the 3,502 papers published at the CHI and UIST Human Computer Interaction (HCI) conferences between 1982 and 2010 are listed by year and sorted with the most cited papers in the middle. 100 Diagrams That Changed the World Since the dawn of recorded history, we’ve been using visual depictions to map the Earth, order the heavens, make sense of time, dissect the human body, organize the natural world, perform music, and even concretize abstract concepts like consciousness and love. 100 Diagrams That Changed the World (public library) by investigative journalist and documentarian Scott Christianson chronicles the history of our evolving understanding of the world through humanity’s most groundbreaking sketches, illustrations, and drawings, ranging from cave paintings to The Rosetta Stone to Moses Harris’s color wheel to Tim Berners-Lee’s flowchart for a “mesh” information management system, the original blueprint for the world wide web. It appears that no great diagram is solely authored by its creator. Most of those described here were the culmination of centuries of accumulated knowledge. Most arose from collaboration (and oftentimes in competition) with others.