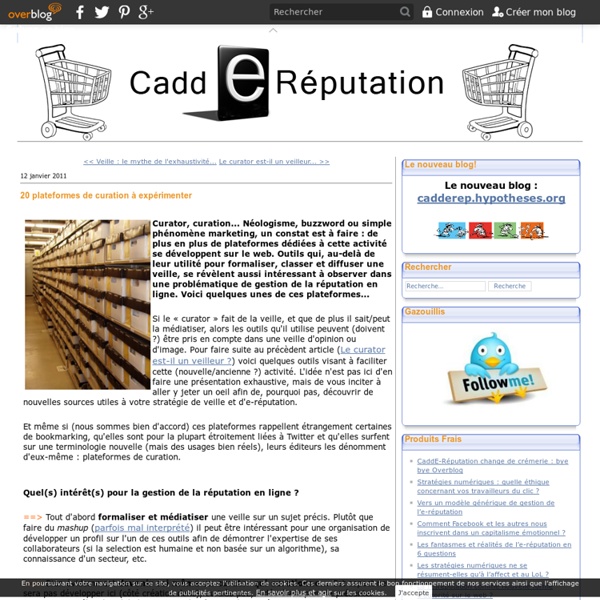 Aggregation Is Not Curation - There Is A Big Difference Posted by Tom Foremski - November 2, 2010 Curation is becoming an increasingly important term and for good reason: the online world is increasingly messy, muddled and full of blind alleys. Search used to be the best way to navigate online but today it is only one part of an Internet user's dashboard. Finding things is fine if you know what to look for, but search is increasingly less effective in judging the quality of links, or putting those links into a context. Digital Humanities Data Curation Institute summer 2013 workshop now accepting applications Digital Humanities Data Curation, a series of three-day workshops, will provide a strong introductory grounding in data curation concepts and practices, focusing on the special issues and challenges of data curation in the humanities. Workshops are aimed at humanities researchers—whether traditional faculty or alternative (alt-ac) professionals—as well as librarians, archivists, cultural heritage specialists, other information professionals, and advanced graduate students. Applications are now being accepted for the first Digital Humanities Data Curation Institute workshop, to be held at the Graduate School of Library and Information Science (GSLIS), at the University of Illinois, Urbana-Champaign, on June 24-26, 2013. Visit the Institute Web site to complete an application by February 15. Carrying out computational research with digital materials requires that both scholars and information professionals understand how to manage and curate data over its entire lifetime of interest.

6 Free Sites for Creating Your Own Comics In the days of cold, hard newsprint, only people who could draw were successful comic strip authors. In some cases, this resulted in comic strips that had very nice pictures, but weren't all that funny (cough, Blondie). Thankfully, the Internet has taught us not to accept an inferior form of comic artistry, but a more flexible one. Comic strip enthusiasts who want funny but don't care about pretty drawing can have their strips, those who want artistry have theirs, and even those with very specific tastes can find something just right. The best part about these developments is that they allow you, regardless of any talent as an artist or comedian, to create your very own comic strip.

Social media looks to fill investigative reporting gap Siobhan Heanue Updated Sun 11 Sep 2011, 9:15am AEST YouTube is considering launching a service dedicated to investigative journalism in response to the decline of in-depth reporting at traditional news outlets. Curation And The Human Web... Posted by Tom Foremski - November 16, 2010 There is no doubt in my mind that the topic of curation and the Internet, is an important one and that it will be a dominant topic in 2011. Curation is important because we are reaching the limits of what can be achieved through algorithms and machines in organizing and navigating the Internet. Aggregation looks like curation but it's not. (Please see: Aggregation Is Not Curation - There Is A Big Difference - SVW)

How today’s college students use Wikipedia for course-related research Findings are reported from student focus groups and a large–scale survey about how and why students (enrolled at six different U.S. colleges) use Wikipedia during the course–related research process. A majority of respondents frequently used Wikipedia for background information, but less often than they used other common resources, such as course readings and Google. Architecture, engineering, and science majors were more likely to use Wikipedia for course–related research than respondents in other majors. The findings suggest Wikipedia is used in combination with other information resources. Wikipedia meets the needs of college students because it offers a mixture of coverage, currency, convenience, and comprehensibility in a world where credibility is less of a given or an expectation from today’s students.

Twitter removes all search RSS links from its site, now users must resort to hacks to get feeds Twitter has eradicated RSS feeds from its web interface once and for all, following an update to the site’s search page today. When Twitter launched its redesign late last year it subtly removed RSS feeds for users’ tweets. And while RSS feeds are still available, you have to be willing to jump through some extra hoops to access them.

Why The Future Of Travel & Destination Marketing Is All About Curation February 15, 2011 | 4 Comments Life is good for the traveller who knows where they are going. There are dozens of great and useful sites online where you can see everything from reviews of hotels to side by side comparisons of airfares from one destination to another. Planning a trip to San Francisco was never so easy … but what if you haven't answered the first and most important question of where you want to go? All of a sudden, life is a lot more difficult. Finding out about destinations is a labrynth of government sponsored tourism sites, linkbaiting sites promising information about a destination but only delivering a long list of pay-per-click links, and individual attractions within a destination.

Crowdsourcing: Crowdsourcing: définition Late last week I pointed to a Wikipedia entry as evidence that crowdsourcing had become a bonafide neologism. A stronger argument for the term's adoption, however, is that the it's starting to appear without reference to me or the original article in Wired. I couldn't be happier with this development, but I'm also noticing that the word is being used somewhat interchangably with Yochai Benkler's concept of commons-based peer production. Mindful that language is slippery, and meaning itself largely determined by the crowd, I'm content to allow the crowd define the term for itself (in no small part because I'm powerless to stop it.)

Beyond Usability and Design: The Narrative Web The web is currently torn by two strong forces, seemingly irresistible and irreconcilable. On the one hand, usability and interface engineering argue for simplicity, consistency, and clarity – for a starkly functional minimalism. On the other, emerging web standards and technologies nourish a continuing efflorescence of new approaches to web design. On the one hand, rigid hierarchical structure, branded as Information Architecture, promises clarity and coherence; on the other, the same rigidity seems to offer sterility and boredom.

Manifesto For The Content Curator: The Next Big Social Media Job Of The Future ? Every hour thousands of new videos are uploaded online. Blog posts are written and published. Millions of tweets and other short messages are shared. To say there is a flood of content being created online now seems like a serious understatement.