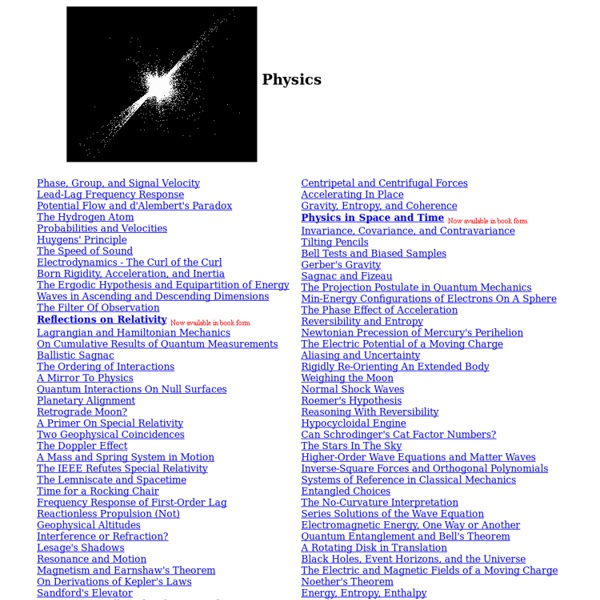 Denisova Cave and the Mystery of the mtDNA Phylogenetic Tree « Rokus Blog Nobody expected a great surprise. Genetic testing of the little finger of an early hominin child found in the Siberian Denisova Cave, Kostenki, in the middle of archeological remains pertaining to Upper Paleolithic culture, would almost for sure confirm DNA similar to ours. There was a slim change that the pinky belonged to a Neanderthal from the neighborhood that got lost, but everything pointed at a an unequivocal member of the advanced group of hominins responsible for introducing symbolic art all over the world, the so-called anatomically modern humans (AMH). The collection of personal adornments and artifacts suggestive of symbolic behavior from the Early Upper Paleolithic deposits of Denisova Cave, Altai, is one of the earliest and the most representative of the Upper Paleolithic assemblages from Northern and Central Asia.

Physics Flash Animations We have been increasingly using Flash animations for illustrating Physics content. This page provides access to those animations which may be of general interest. The animations will appear in a separate window. Math, Physics, and Engineering Applets Oscillations and Waves Acoustics Signal Processing Electricity and Magnetism: Statics Electrodynamics Quantum Mechanics Teleportation Teleportation is the name given by science fiction writers to the feat of making an object or person disintegrate in one place while a perfect replica appears somewhere else. How this is accomplished is usually not explained in detail, but the general idea seems to be that the original object is scanned in such a way as to extract all the information from it, then this information is transmitted to the receiving location and used to construct the replica, not necessarily from the actual material of the original, but perhaps from atoms of the same kinds, arranged in exactly the same pattern as the original. A teleportation machine would be like a fax machine, except that it would work on 3-dimensional objects as well as documents, it would produce an exact copy rather than an approximate facsimile, and it would destroy the original in the process of scanning it. In 1993 an international group of six scientists, including IBM Fellow Charles H.

Community FQXb (bio)By WILLIAM OREM • Mar. 23, 2014 @ 21:39 GMT Everyone is talking this week about the dramatic confirmation of inflationary theory: those first-instant gravitational waves whose details may even point--being, if you will, quantum phenomena that went suddenly ultra-macroscopic--toward the correct way to unify QM and GR. I myself have been musing on rather astonishing work in another field. Nanotechnology Basics Home > Introduction > Nanotechnology Basics Nanotechnology Basics Last Updated: Friday, 14-Jun-2013 09:28:04 PDT What is Nanotechnology? Answers differ depending on who you ask, and their background.

String Theorists Squeeze Nine Dimensions Into Three A simulation of the early universe using string theory may explain why space has three observable spatial dimensions instead of nine. The leading mathematical explanation of physics goes beyond modern particle theory by positing tiny bits of vibrating string as the fundamental basis of matter and forces. String theory also requires that the universe have six or more spatial dimensions in addition to the ones observed in everyday life.

The Science Creative Quarterly & A DIALOGUE WITH SARAH, AGED 3: IN WHICH IT IS SHOWN THAT IF YOUR DAD IS A CHEMISTRY PROFESSOR, ASKING “WHY” CAN BE DANGEROUS - StumbleUpon SARAH: Daddy, were you in the shower? DAD: Yes, I was in the shower. SARAH: Why? DAD: I was dirty.