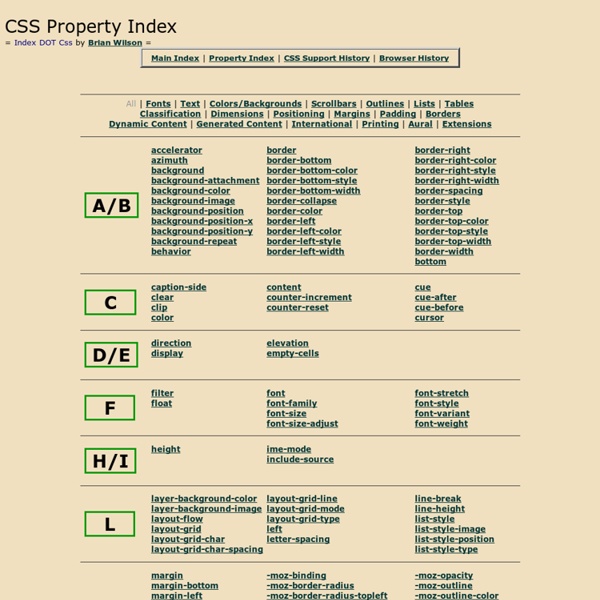 Essential bookmarks for web designers and web developers The project 'Essential bookmarks for web-designers and web-developers', previously updated on this page, has a new url ( a new design, a new hierarchical structure and, of course, new web-dev-resources. The reason for changing the basic concept of this project was a huge number of suggestions and links, which have overflooded my mailbox recently. Over the last few days, a new project was created and updated. 40 CSS Reference Websites and Resources If you want to design websites or modify your existing website design, then you need to have at least a basic knowledge of Cascading Style Sheets (CSS). Thankfully, CSS is a very easy language to get to a grip on, however you may find it takes a little more time to master it. Today we would like to share with you 40 resources that will help you on your CSS journey. We have listed great CSS references and CSS blogs for learning more about the language; not to mention compatibility tables to help you remember how certain browsers handle certain CSS elements.

Page Layout About the CSS Layout Generator The CSS Layout Generator was first released by Tony Aslett in October 2003, since then over 871,000 layouts have been generated. Updated in November 2010, HTML5 doctype can now be selected and a simple HTML5 template with appropriate tags will be created. Other HTML and XHTML doctypes are still available. The generator helps you create the structure of your website template using valid HTML and CSS. Gnuplot 4.2 Tutorial Department of Civil and Environmental Engineering Edmund T. Pratt School of Engineering Duke University - Box 90287, Durham, NC 27708-0287 1. INSTALLING AND STARTING GNUPLOT - version 4.2 Gnuplot is a free, command-driven, interactive, function and data plotting program. Pre-compiled executeables and source code for Gnuplot 4.2.4 may be downloaded for OS X, Windows, OS2, DOS, and Linux.

CSS tips and tricks, Part 1 As I stated in my recent article on CSS shorthand properties, I get a lot of questions about CSS from people who haven’t spent quite as much time working with CSS as I have. Their CSS is often not as efficient as it could be, and I come across some mistakes that are easy to make when you’re starting out with CSS. Since I’ve been using CSS extensively for a couple of years I’ve picked up some tricks that either make the CSS more efficient or solve a specific problem. Challenge Technical Guide - Gnuplot Tutorial This tutorial will demonstrate the use of Gnuplot on a PC. If you do not have Gnuplot, you should get it from for your machine. Other tutorials are available from Once you have Gnuplot installed, fire it up by clicking on the Gnuplot icon: When Gnuplot first starts on a PC, it will display plots to your screen by default.

The Top 15 Web APIs For Your Site : New Internet Media @ Pingable.org Machine-based interaction is a common feature of Web 2.0 sites like Digg, Facebook and Dilicious, and these days it goes well beyond simple web feeds. An application programming interface(API) is what allows programmers to write applications and widgets that interact with services on these sites. The API gives them web-based access to data and functions from such sites. For example using the GoogleMaps API one could pull data and mapping information from Google that enables users of a site to view an embedded map of the location of a business. Although typically using an API does require some expertise in programming, many of the APIs which are being released by sites are well documented with good examples on how to implement them, WebAPI. This article also details many of the user created scripts which have been generated using the various API’s which will give end users something to play with too.